People in Pakistan have not taken the COVID-19 seriously. What has taken the world to its toes has been taken lightly by the locals as govt, police and influencers are requesting people to stay at home. They even ignore the teachings of Holy Quran & Sunnah. Here's the detailed account for people's response against the pandemic. 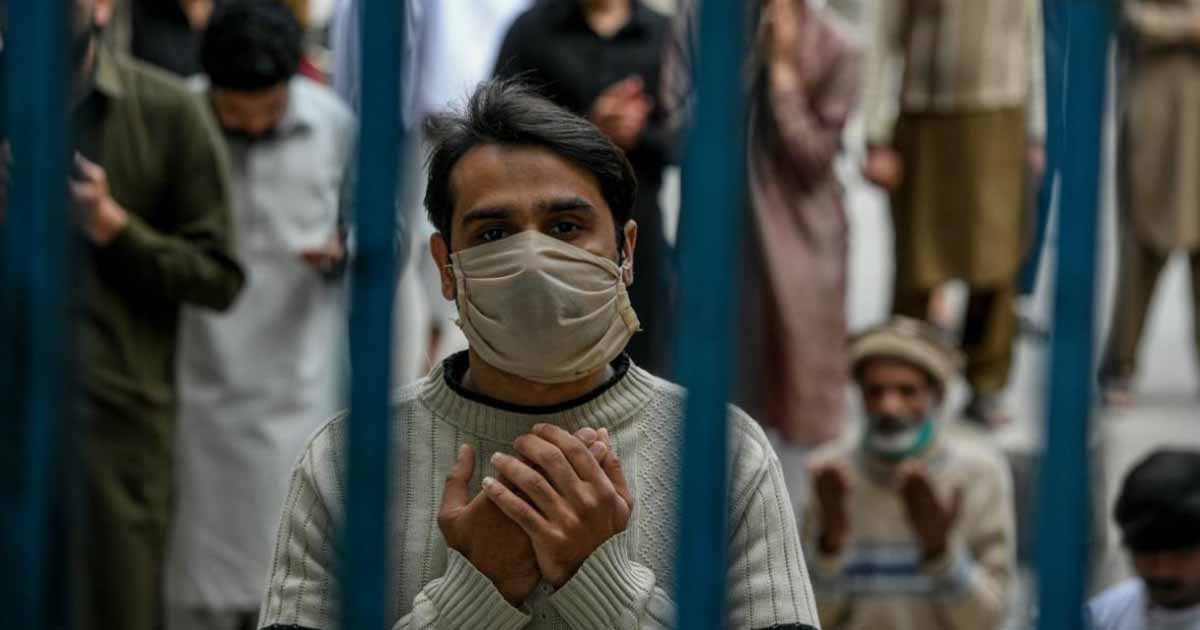 We’ve learnt from the Covid-19 experience that human life is the most precious thing on the face of the earth, the rest all hovers around humans to be safeguarded, developed, protected, made comfortable and productive.

Allah in Quran says “Do you think we have created you just for nothing?” surely the purpose is larger than life and for attaining that highest level – Nafsi Mutmaenna- which Iqbal envisioned “Takmeeli Khudi” Neitzsche “SuperMan” and Malso’s “ Self actualized” tells us that first life has to be protected and then developed. There are so many other sacred texts that emphasise on the first and foremost duty, which is to save and serve human life.

The economy, systems, science, philosophy, art and politics are there to support, facilitate, help it thrive and make it more meaningful. The ongoing COVID-19 pandemic, however devastating it may be, would vanish before we know, just like the previous epidemics in history. The world has witnessed many epidemics in history. They go back to 400 BC. In 429 BC the Plaque of Athens broke out in Greece causing 100,000 deaths, the cycle of these diseases goes on as there were several Plaque epidemics.

Humans have suffered the 1918 Spanish flu, the 2003 SARS and the 2012 MERS outbreak. In all three epidemics, one thing was common: Humans emerged victorious. What’s important is how humans respond and what they learnt from each outbreak to get better prepared for future instances. We need to adapt ourselves to better preempt another one, this is an unending cycle and would continue till life exists on earth.

The COVID-19 pandemic though has some semblance with other coronaviruses, it is unique in many aspects. It is this reason why Covid-19 has proved to be a daunting challenge for people from all walks of life. Like other emergencies, it has put to test the leadership of global and national leaders and also the character of its populace. Hopefully, humans would emerge triumphant in this war, though it’s premature to determine at what price

Why is it difficult to contain Covid-19?

The biggest impediment in controlling COVID-19 is the absence of any preventive vaccine. The cautious estimates by the scientific community is that it would cost around 2 Billion USD and a period of 12 to 18 months before a vaccine could be launched for public use. Having that in perspective one wonders, what are the most feasible options?

Medics have come out with various possible treatment regimes and various remedies at different locations. These are tested, yet none has been approved for mass-scale utilization.

Even though this disease has a facile means of transmission, there are treatment limitations as scientific research is still in the initial stages. It’s a race against time of an unprecedented scale.

The only effective and time tested tool that can minimise human sufferings is prevention, testing, isolation, contact tracing and social distancing.

The first reported case in Pakistan was on 26th February 2020 and now we have a tally of more than 6000 cases and 107 casualties. Who knows, we might be at the tip of the iceberg, as a lot more cases (could be in thousands ) might still remain undetected, due to the limited testing capacity. If we start a mass screening exercise on the pattern of South Korea where a quarter of a million tests were conducted, we may end up with thousands of cases.

With a delayed and unenthusiastic response, the spread might have already taken place and can be assumed to be at least 7- 10 fold more than the current figure. Keeping in view the morbidity and mortality of the infection, the number is still manageable, provided that it’s not allowed to surge from here.

The Government, at last, had to resort to countrywide lockdown — though late — and with Pak army upfront — it turned out quite effective.

Muslims in Pakistan disregard mosque ban over coronavirus: ‘God is with us’

"Thousands of devout Pakistani Muslims are claiming… only Westerners can die from coronavirus as they brazenly violate social-distancing orders to pray in mosques…"https://t.co/KSYqHo7H1Q— Ex-Muslims of North America (@ExmuslimsOrg) April 15, 2020

We see footages where police and army personnel are roaming, making appeals to the public to stay at home. We’ve come across key influencers, leaders, media personalities and sports stars who are making the same appeals. On print, electronic and social media the same messages are circulating. However, the reports from some media houses paints a very different picture. People are seen roaming, cars are on the roads and the administration is finding it difficult to enforce a lockdown.

What could be the reasons for this negligence? How are these people comfortable with breaking the rules?

The reasons are deep-rooted in our culture and our national attitude. This manifests itself in the non-seriousness and utter disregard for government orders.

Many people remain unaware of any serious health crisis and majority when interviewed for their non-seriousness attributed their criminal negligence to “fatalistic theory”. They believed that what is written is bound to happen no matter what one does. They ignore the teachings of the Holy Quran, Sunna and other Islamic texts, essential for a Muslim.

This wrong interpretation of Islamic code, injunctions and law have led to troublesome events in the past. The issue at hand has also been badly damaged by the perpetuation of this philosophy.

The main contributor to this defiance is that people, in general, want to remain in their intellectual, physical and emotional “Comfort zones”. And, lack of education, self-reflection and soul searching further insulate it. In this case, the rejection of self-isolation, social distancing and wearing a mask is mainly because people don’t want to come out of their comfort zones.

Another reason for this cultural dilemma is the value that people attach to social acceptability — at the cost of theirs and others lives — which can partly be attributed to ignorance and partly to communal stubbornness. In a mosque where 150 people pray five times a day, since the majority doesn’t wear masks the few wearing it are frowned upon, this discourages them. This trend is proving lethal.

This epidemic is once more a testimony to the fact that how misguided we can be when it comes to religion and cultural interpretations. This crisis has been used by some factions, to promote their unreligious agendas.

Just a case in point is the Saudi regime’s lockdown during this pandemic. Though largely considered a strict Islamic state, Saudi Arabia took timely steps and closed Harmain Sharrefain for all congregations. However, the clergy in Pakistan didn’t follow suit. At last, the government had to agree on a minimalist approach.

While this epidemic exposed our healthcare system and health leadership’s inefficiency, it has also reinforced our inability to manage the religious clout.

Polio is another good example where self-imposed ignorance, disdain for new knowledge and the edifice of cultural cloak has proved detrimental to nation-building; we are the second country in the world where Polio still haunts children daily.

Counterintuitive self-denial prevailing with regards to Covid-19 has the potential to wreak havoc across the country. How can one assume that we are the blessed ones and that God will protect us without any effort from our side? How naive of us to imagine that we wouldn’t be a part of the 4-5% people who would develop complications as a result of coronavirus?

It is pertinent to mention that individual immunity is shaped by many intrinsic and extrinsic factors. Luck doesn’t play a major part, especially when it all comes down to the immune systems of the individuals.

It’s important to mention that Pakistan’s newborn mortality rate is the highest in the world. It’s a country where widespread malnutrition exists (48 per cent of the children are stunted). It’s already prone to infectious diseases like TB, Meningitis, Malaria, Dengue, Measles, and Pneumonia. Provided that we haven’t yet been able to reverse the trajectory of non-communicable diseases, fighting a pandemic of this scale, is altogether a different ball game.

Another worrying factor is that our healthcare system has still not been able to create a “knowledge management culture” which is essential for discovering new avenues of knowledge and learning.

What could have been done differently? And how could the knowledge acquired, be used to ensure a robust and effective response, should another epidemic strikes? Health sector, for years, has been neglected by the policymakers.

Strategies to deal with the crisis

Equally our political culture hasn’t proved very conducive when it comes to health emergencies and epidemics. The earthquake of 2005 was a perfect opportunity for creating national solidarity and national consensus. Unfortunately, that didn’t happen. On numerous occasions there has been political point-scoring. Calamities have been utilised for political gains and pity benefits. This has damaged national cause, and a repeat of that would only be a recipe for disaster.

The need of the hour is a political consensus. Building a national narrative that is signed by all political and religious leaders and owned by all state institutions. It should be publicised through all forms of print, social and electronic media. There will be ample time and many other opportunities when states could steer their respective agendas. But at this point, a befitting, effective and productive national response, and a long term strategy will decide the future of the 220 Million people.

Read more: Rural areas of Pakistan next target of Covid-19

A careful study of all the pandemics has shown that the most effective strategy to deal with a contagious disease is social distancing. It requires no technicality, no cost and no science. However, if we mould our cultural barriers and taboos in favour of social distancing, Pakistan will most certainly emerge victorious.

To make this a success, all social, religious and political leadership should utilize their respective spheres of influence to preach adherence to social distancing.

Dr Nadeem Jan ( Tamgha I Imtiaz ) is a recognized health expert who has an illustrious career with UN, USAID, DFID, World Bank, Gates Foundation and Governments of Pakistan, Somalia, Kenya, South Sudan, Afghanistan and Philippines. The views expressed in this article are the author’s own and do not necessarily reflect Global Village Space’s editorial policy.