A former management consultant focusing on the energy industry – using the lens from London – helps us understand a lot more about CPEC than meets the eye.

China’s rise has been attributed to the successful implementation of its ‘Dual Track’ transition policy based on gradual, incremental, and near-constant reform of its economic sector in conjunction with Five Year Plans. The is Dual Track policy emphasized on social and economic reform; without any corresponding political reform.

It started under Deng Xiaoping post-1976, based on the Zhou Enlai’s “Four Modernisation Plan” and has seen additional changes with every Five Year Plan (FYP). The National Development and Reform Commission of the People’s Republic of China (NDRC) has played an instrumental role in China’s development through these Five Year Plans.

Economic and social reforms proposed by the NDRC in its 5th and 6th FYPs, from 1978 till 1984, have formed the bedrock of subsequent economic development. China was divided into three zones, Coastal, Central, and Western. The coastal zone became the immediate focus of economic reforms through “Special Economic Zones”, and an “Open Door” policy to attract foreign direct investment (FDI) and creating internal economic corridors.

By 2006, the rapid economic development of the Coastal and Central regions had created a huge disparity in the economic and social well-being within China. The focus since the 11th and 12th FYPs has been the re-orientation of China’s “Dual Track” reform towards China’s Western region. 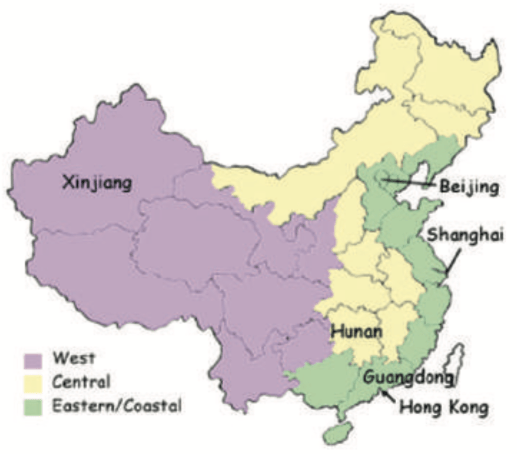 The 7th and 8th FYPs (1984-1993) built upon this success by introducing internal market reforms and began China’s transformation into a localized Socialist market economy while Jian Zemin’s subsequent 9th and 10th FYPs went further and introduced large-scale privatization within provinces, an expansion of successful policies into the Central Region and laying the groundwork for future expansion within the Western Region.

Read more: How is the government confusing all of us on CPEC?

Conception and Birth of CPEC

Pakistan’s hybrid-regime headed by General Pervez Musharraf had been engaged in Free Trade Agreement (FTA) negotiations with China and in 2005 made a formal offer to create a “Trade and Energy Corridor” linking the Arabian Sea port of Gwadar with Kashi in China’s Western Region.

The focus was to link Pakistan’s existing National Trade Corridor (NTC) development program with CAREC’s trade corridors to be finalized by 2008. From November 2006 onwards the governments of Pakistan and China considered a series of core and periphery projects to form the “Trade and Energy Corridor”.

In November 2008 NDRC’s 12th FYP task force proposed to bring Pakistan into the fold of CAREC. In 2010, Pakistan formally joined CAREC and its “National Trade Corridor Improvement Program” (NTCIP) was integrated into CAREC’s Corridors 5 & 6 with a view to complete integration by the 13th FYP’s Mid-Term review in August 2018.

CPEC transformed from a strategic ‘program’, that took years to develop and considerable institutional cooperation, to a ‘project’ of the new PM’s vision.

Read More: Op-ed: A focus on digital connectivity in the China-Pakistan Economic Corridor

The study’s proposals were to be incorporated into the coming 13th FYP and in early 2013, the initial Feasibility Study and Preliminary Design for the Pakistan-China “Trade and Energy Corridor” were approved by NDRC and shared with Pakistan for approval with the aim to complete the corridor by the mid-term review of the 14th FYP in August 2023. In 2013, the Trade and Energy Corridor was announced as the China-Pakistan Economic Corridor (CPEC). 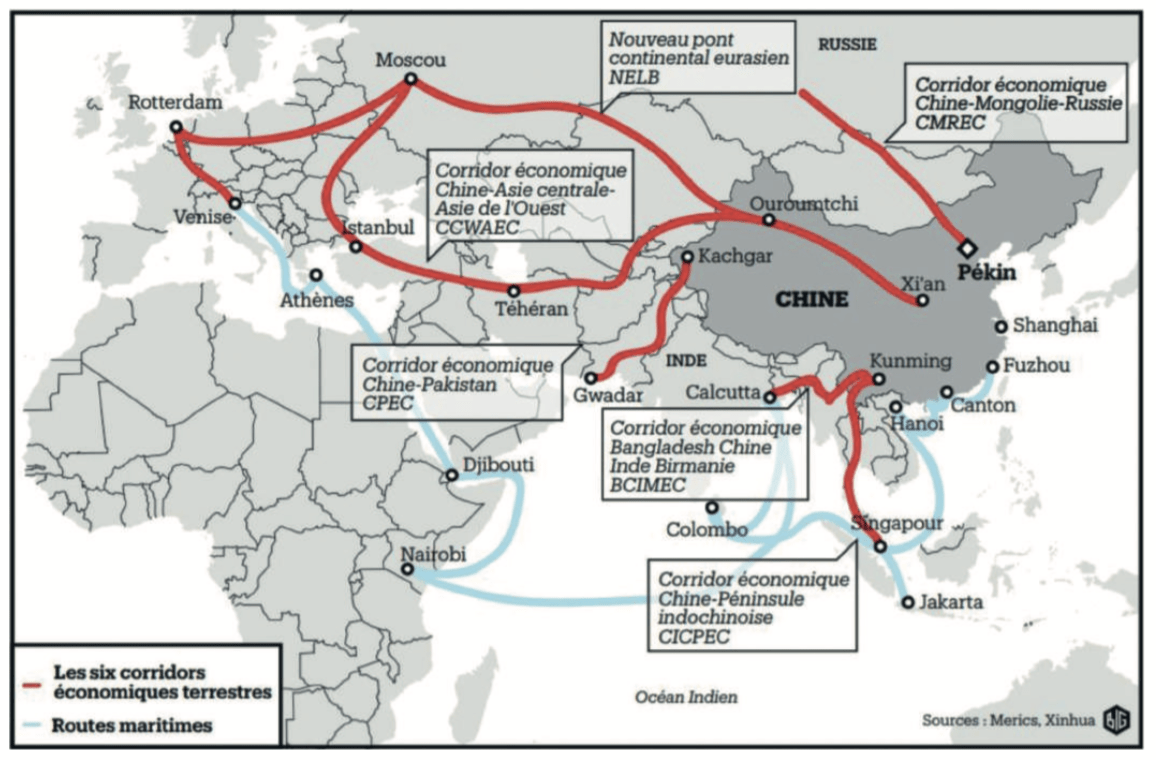 Before examining Pakistan’s handling of CPEC since 2013, it is important to consider that while institutions in China and Pakistan had been working to formalize what is now CPEC since 2008, similar initiatives were being studied along China’s borders as part of a comprehensive policy of greater economic development of China in the 21st century, formally announced in March 2015, as the Silk Road Economic Belt (SREB) and the 21st Century Maritime Silk Road (MSR).

China identified six (6) distinct corridors with Eleven (11) separate nodes of trade within these corridors forming the linchpins of the SREB & MSR. The six (6) corridors were informally designated by the following names:

Read more: Pakistan asks US not to see CPEC from the Indian lens

In Pakistan, the story since 2013 has been a sharp contrast. While NDRC concentrated on the institutional developments and internal reforms necessary to integrate both CPEC and CAREC into China’s wider plans for SREB, Pakistan’s priorities shifted from institutional towards political goals.

Pakistan’s new government launched a widely publicized marketing campaign to marry CPEC with the ‘vision’ of the Prime Minister who took office in June 2013. From 2005 till 2013, the development of the planned corridor had been institution-driven, with Pakistan’s Planning Commission and China’s NDRC taking the lead to emphasize the infrastructure development required for economic growth.

Since 2013, NDRC pursued a multi-faceted and multi-regional approach, evident from SREB, to develop all six neighboring regions. NDRC concentrated on formalizing the “Five Links” which formed the base for the development of China’s Western Region. This involved strategies for economic consolidation, industrial capacity, liberalizing internal markets, financial institutional reform, and human resource development in the Western Region and formed the core of NDRC’s work before SREB’s formal incorporation into the 13th FYP (2016-2020).

CPEC became subject to a political discourse campaign to serve political gains for the 2018 election cycle.

CPEC transformed from a strategic ‘program’, that took years to develop and considerable institutional cooperation, to a ‘project’ of the new PM’s vision. Phrases like ‘game-changer’ and ‘gift to the nation’ were banded about while almost all CAREC projects, in various stages of completion, were re-branded as the brainchild of that vision. Between 2005 and 2012 Pakistan’s efforts in CAREC and with NDRC, though off-pace had been largely institution-driven. After 2013 CPEC became almost entirely discourse driven with little emphasis on the institutional work needed to build upon the preceding decade. 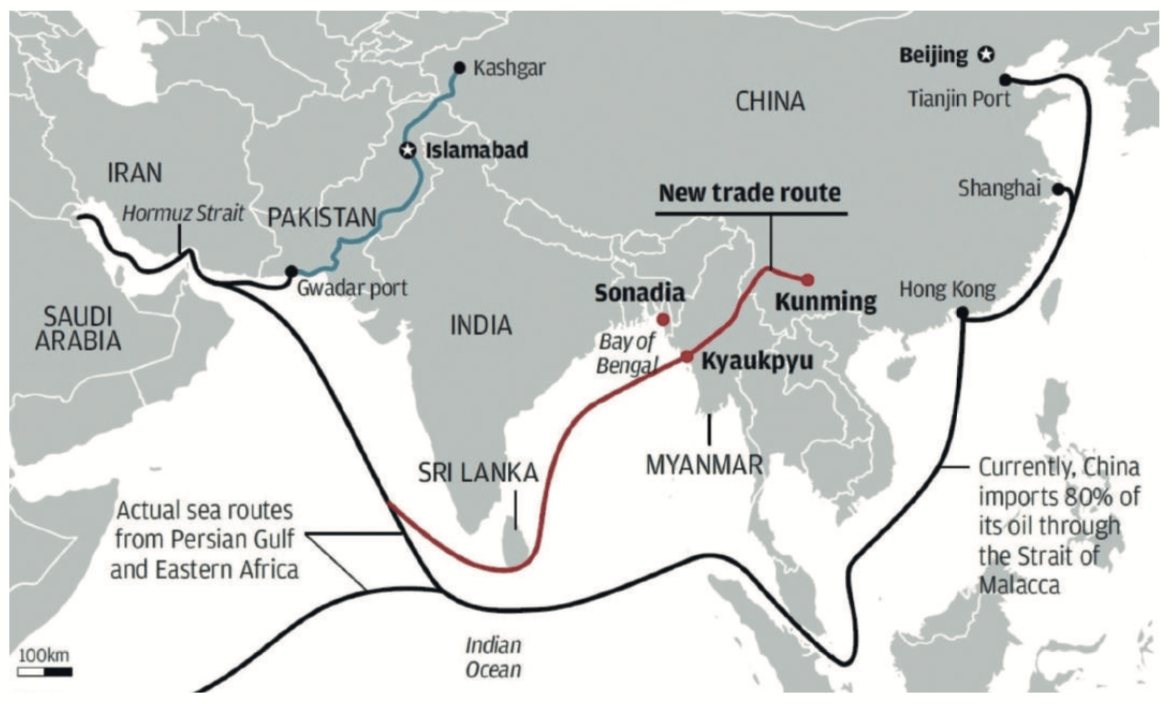 In a marked shift from strategic institutional planning towards political short-termism based on election cycles, much of CPEC’s impetus was lost. CPEC’s transparency was a clear casualty. In the years since 2013, Pakistan issued revised details of the routes and plans for CPEC. The re-orientation towards strategically unimportant but politically impactful schemes in the PM’s home province gave rise to severe criticism among other provinces and the Planning Commission’s minister dissuading voices of criticism from becoming voices of dissent.

Read more: US is not against CPEC: An Indian view?

While NDRC consolidated the industrial and economic capacity of its internal regions, Pakistan was busy re-issuing updated maps to end political speculation over CPEC’s route manipulation. Rather than transparently emphasize the level of credit undertaken to facilitate CPEC and create internal capital markets to fund and sustain provincial and district level projects, Pakistan has been busy obscuring CPEC’s costs through inventive redefinitions of FDI, Debt, and Foreign Portfolio Investments (FPI).

The key to power sector development is “competitiveness”. Pakistan has both supply issues and serious problems with regional competitiveness. Power projects must bridge supply issues at a price that is competitive within the region while using an energy mix that can withstand temporary jolts to one or more sources of energy. The is requires planning that emphasizes the total cost of ownership of the power projects and the security of raw material supply.

Vietnam, part of CICPEC, negotiated multi-lateral industrial initiatives to create Special Economic Zones to favor joint ventures with countries such as Japan, United States, and India in order to ensure that Vietnamese counterparts do not get dwarfed by the industrial giants of China’s internal Pearl River Economic Corridor, which has a GDP almost equivalent to the entire GDP of India.

Kazakhstan, fearful of a return to the time of a single market dependency of its Soviet days, ensured it pursued bilateral initiatives with Russia and Iran so that Kazakhstan becomes the key transit conduit that links SREB’s three corridors; NLEB, CCWAEC, and CMREC. Pakistan undertook Energy projects at unsustainable unit costs, such as Gadani Power Park and Power plants in Punjab far from raw material availability, that may assist the incumbent government to win votes in the 2018 election cycle rather than undertake power sector reforms, conducted at breakneck speed by NDRC in China. Iran, part of CCWAEC, pushed China to fund rapid reform of Iran’s Energy Sector.

Read more: Why is India doing propaganda against CPEC?

In essence, countries in almost every other economic corridor being pursued under SREB understood China’s need for these corridors for its sustainable continued growth. Most embarked on tough diplomatic and institutional negotiations with China to ensure they reap the maximum amount of benefit from SREB. China’s gains must feature quid-pro-quo benefits and do so where the countries concerned wish to concentrate their regional competitiveness.

Pakistan’s great failing since 2013 has been the absence of such corresponding efforts and this emphasizes the detrimental loss to Pakistan’s internal and regional economic development. Much like NDRC worked in conjunction with the Chinese Ministry of Foreign Affairs and Ministry of Commerce to ensure SREB integrated all aspects of China’s regional ambitions, Pakistan’s Planning Commission needs to re-assert the institution driven emphasis of CPEC, working in conjunction with Pakistan’s Foreign Office and Ministry of Commerce to integrate CPEC into Pakistan’s Economic and Regional policies.

An initiative that links CPEC, BCIMEC, and CCWAEC with the Gulf Cooperation Council (GCC) should have been, and now must be, the crux of Pakistan’s regional economic goals, much like Kazakhstan’s efforts. For that Pakistan would have to pursue bilateral negotiations to involve Afghanistan, Iran, India, and the GCC in CPEC to focus on their intended exports into China’s Western and adjoining Central region markets which have a collective GDP at present of almost One Trillion US dollars.

To reap the maximum benefits available to it through CPEC and SREB, Pakistan will have to return CPEC to an institution-driven long-term program emphasizing strategic and sustainable economic and regional gains rather than transform CPEC into a project of political discourse focused on short-term election cycles delivering incremental benefits at unsustainable costs.

The original article was published in the December issue of the Global Village Space Magazine. The writer is a former management consultant focusing on the Energy Industry and writes on Energy Security and the Politics of Energy Resources. He is conducting research related to the role of Central Asia’s energy resources in China’s Energy Security at the University of Westminster, UK.

Previous article
After Nepal, Maldives raises specter of waning Indian influence
Next article
Why accountability of house of Sharif is in doubt?