Minister for Planning, Development and Special Initiatives Asad Umar Friday said that the pace of projects under China Pakistan Economic Corridor (CPEC) would be accelerated in the coming months following a meeting with Chinese Ambassador Yao Jing. Energy and infrastructure projects under CPEC are completed or near completion, and the ground breaking of Allama Iqbal Industrial City is testament to its success. 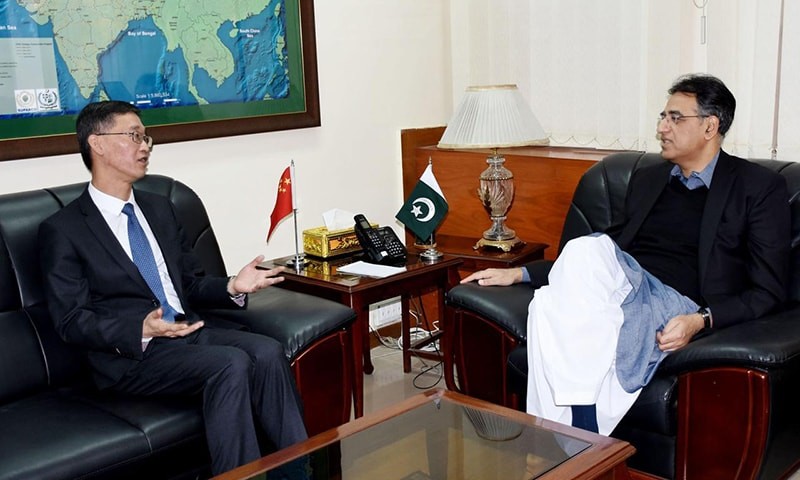 Minister for Planning, Development and Special Initiatives Asad Umar Friday said that the pace of projects under China Pakistan Economic Corridor (CPEC) would be accelerated in the coming months.

Talking to Chinese Ambassador Yao Jing on matters relating to CPEC and bilateral economic cooperation on Friday, the minister expressed his satisfaction at the progress on various projects under CPEC.

CPEC is a programme with economic zones, infrastructure & energy projects necessary for the development of Pakistan. CPEC will be more successful and beneficial for the economy when more countries come and invest here. – Finance Adviser @a_hafeezshaikh pic.twitter.com/7OsSPDrBy7

During the meeting with Yao Jing, the minister stressed the need for Pakistani manufacturing industries to be included in the global value chain by partnering with Chinese companies.

The ambassador assured the minister that the Chinese government was keen to promote such relationships between businesses and manufacturing industries of both the countries. The minister emphasised that the huge potential in the sector could be explored by modernising its various sub-sectors.

In September 2019, Yao Jing said CPEC projects in energy and infrastructure sectors have either been competed or are near completion. Speaking at a ceremony at the Rawalpindi Chamber of Commerce and Industry (RCCI), the envoy said completion of phase-I of CPEC had set a strong foundation for the second phase, which would focus on the development of Special Economic Zones (SEZ), strengthening trade and cultural ties through joint ventures and exchange of delegations.

The Chinese envoy said the private sector should come forward and play its due role in strengthening trade linkages between the two countries. He also pointed out that Pakistan could play the role of a bridge between the East and West.

“SEZ development has already entered an important phase and efforts are underway to ensure successful Pakistan-China industrial cooperation,” he remarked.

He highlighted that China had granted duty-free access for export of 313 goods under the second phase of China-Pakistan free trade agreement (FTA). “This will help increase exports by tapping Pakistan’s potential in agriculture, textile, food, minerals, engineering, and other sectors.”

Pakistan is expected to submit its final case to the FATF by next week, with Min. for Economic Affairs Hammad Azhar leading the meeting. Another meeting with the APG is set to happen between January 21 and 24, wherein further discussion on Pakistan’s performance will take place.

Until recently, Pakistan remained at risk of being placed on the “blacklist” of Financial Action Task Force (FATF), a global watchdog monitoring terror financing and money laundering around the world, experts warn.

With the dispatch of Pakistan’s detailed reply to the Joint Group of the Financial Action Task Force (FATF), a major step towards the removal of the country from the grey list may be taken.

More than 25 companies have already agreed to invest in #AIIC. Work on 6 more SEZs is already underway.

These SEZs will ignite industrial revolution in Punjab!

The recent ground breaking of Allama Iqbal Industrial City in Faisalabad Special Economic Zone is testament to CPEC’s work and an important breakthrough for Pakistan. The mega project is linked with CPEC Economic Zones and Chinese diplomats had been quietly complaining that Pakistani institutions and businesses are not geared to benefit from “Industrial Relocation” which China is offering.

FIEDMC, a public private initiative of Punjab Government since 2004, has thus proved its management potential by being the first entity to bring a CPEC linked Industrial Zone to the  stage of take-off.

This is the first CPEC linked Economic Zone that is being operationalized out of the nine zones that were conceived.While unfolding the salient traits of the Allama Iqbal Industrial City project to media at the project’s groundbreaking site, Chairman FIEDMC Mian Kashif said ‘This mega project takes the lead among the project of Special economic zones planned under CPEC as being the first to operationalize among 9 planned’.

Pakistan is an attractive investment destination for foreign investors, steadily developing under the dynamic leadership of PM Khan and holds a large diverse market with a rich array of resources and export-oriented companies that would prosper with ease in the comforts of Allama Iqbal Industrial City and would contribute more towards Pakistan’s economy by attracting more foreign investment, which currently Pakistan is in dire need of, he went on to say.

Previous articleDeath of Sultan Qaboos: Will Oman’s role change in the region?
Next articleA disease-free life: 5 things that helps you live longer

16 September 2021
Previous articleDeath of Sultan Qaboos: Will Oman’s role change in the region?
Next articleA disease-free life: 5 things that helps you live longer

Pakistan needs to address issues in Balochistan before its too late

Mamnoon Hussain urges youth to reap the fruits of CPEC