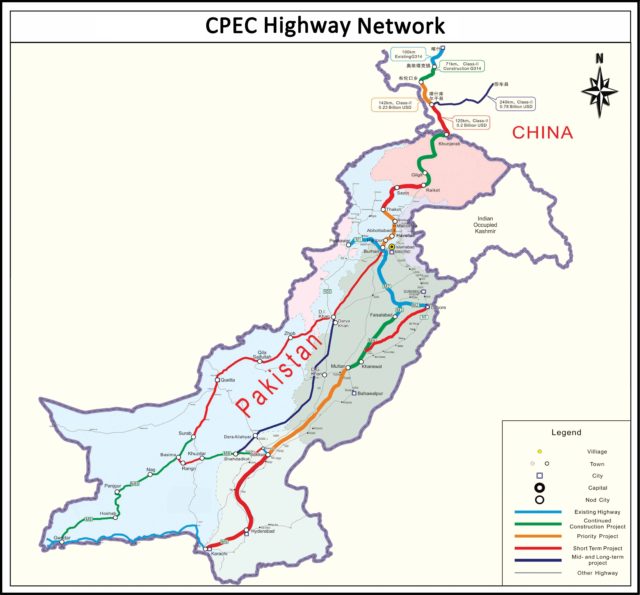 Since April 2015, China and Pakistan have been endeavoring to complete their joint China-Pakistan Economic Corridor (CPEC) project. The project is imperative for both states’ sustainable economic growth. Moreover, many Eurasian, Central, and West Asian countries have also expressed their desire to partake in the project. The new membership, certainly, enhances the efficacy of the project. These developments accentuate that the project contains potential to revolutionize the regional commerce and positively contribute in the global trade.

According to the estimates the ‘One-Road, One-Belt would establish close land and maritime connections between/among 60-plus countries across Asia and Europe.

CPEC project has the potential to transform the socio-economic landscape of Pakistan. The economic stability is imperative for political stability which not only enhances the internal and external security of the state but also germinates more opportunities for the prosperity of the citizens. Simultaneously, CPEC would contribute constructively to the gradual peaceful rise of China. It would provide Chinese merchants with the shortest and the most secure route to West Asia. China will also get relief from the Malacca strait imbroglio.

Neither the economic stability of Pakistan is acceptable to its regional competitors, nor China’s emergence as a global power is tolerable to many states. They are aware of the potential progressive outcome of the CPEC, which is a flagship project of President Xi Jinping’s “One-Road, One-Belt” vision. According to the estimates, the ‘One-Road, One-Belt would establish close land and maritime connections between/among 60-plus countries across Asia and Europe. This connectivity definitely ushers an era of prosperity for all the members of the project.

Obama Administration’s pivot or rebalance strategy in Asia-Pacific was designed in 2011-12 to contain China.

China’s pivot to West and Pakistan’s pivot to Central, West, and South Asia bothers regional and global aspiring hegemony. Consequently, they have been hatching regional and international conspiracies to sabotage the CPEC project. The fifth column is endlessly working in creating mistrust between the provincial and central governments in Pakistan.

It is also negatively propagating that ‘Chinese would sell their cheap products in the Pakistani market, which may cause unemployment as well as the destruction of local industries’. Indeed, cunning treacheries tricks of the fifth column are perilous for the CPEC project as well as hazardous for the economic prosperity of the people of Pakistan.

Read more: To Win from CPEC: We must revise our trade policies

The American strategic community considers China as an emerging strategic competitor in the current geopolitical landscape of the world. Hence, Asia-Pacific region has become a geostrategic priority for the Pentagon. Obama Administration’s pivot or rebalance strategy in Asia-Pacific was designed in 2011-12 to contain China. In this context, the CPEC reduces Chinese dependence on the South China Sea trade route. Subsequently, it would facilitate China to take firm actions while pursuing its strategic objectives in Asia-Pacific.

Despite having impressive economic relations with Beijing, Premier Modi government is determined to wreck CPEC project because it is in the interest of Pakistan.

The United States and its like-minded European nations also seemed frustrated with the CPEC. It was reported that almost all the central European states including the United Kingdom, except Italy, would be distancing from a summit organized by Chinese President Xi Jinping on a new Silk Road scheduled in May 2017. The objective of the summit is to advertise the “One Belt, One Road” international credentials and make it less China-centric. The encouraging news is that Presidents of Russian Federation, Philippine, Switzerland, Czech Republic and Prime Ministers of Spain, Greece, Hungary, Serbia and Poland along 28 other leaders will attendant the summit.

The Indian ruling elite’s hysterical attitude towards CPEC is alarming. It has been endeavoring to create internal discord in Pakistan. The Indians are cognizant of the fact that once CPEC is implemented; it would change the face of Baluchistan. More precisely, the people of Baluchistan would be its greatest beneficiaries in the long term. Therefore, the Indian intelligence agency, RAW, crafted a network in Baluchistan to obstruct the construction of CPEC infrastructure.

Premier Modi government is determined to wreck CPEC project because it is in the interest of Pakistan.

Admittedly, China has maintained impressive bilateral working relations with India. Currently, it is having more than 80 billion US dollar bilateral trade volume with India. Despite having impressive economic relations with Beijing, Premier Modi government is determined to wreck CPEC project because it is in the interest of Pakistan. Moreover, the Indo-US strategic partnership has been receiving a positive response from both Modi government and Trump Administration.

On April 18, 2017, HR McMaster, President Donald Trump’s national security adviser, visited New Delhi to assure Premier Modi to increase defense cooperation. He also promised to support India’s status as a major defense US partner and Indo-Pacific doctrine. The primary objective of the Americans is to build and encourage India to counter China’s increasing significance in Asia. To conclude, the CPEC project would be transforming the global geo-economic landscape. China and Pakistan would be the primary beneficiary of the project. Hence, Beijing and Islamabad ought to be prepared to intelligently encounter the anti-CPEC regional and global challenges.

Dr. Zafar Nawaz Jaspal is an Associate Professor, School of Politics and International Relations, Quaid-i-Azam University, Islamabad. He is also an advisor on Non-Proliferation to SASSI, London and a course coordinator at Foreign Services Academy for the Pakistan Ministry of Foreign Affairs. This piece was first published in Pakistan Observer. It has been reprinted with permission. The views expressed in this article are the author’s own and do not necessarily reflect Global Village Space’s editorial policy.

China sends another consignment to Pakistan

Pentagon’s report about China: Some valid points but exaggeration mostly