Cricket ‘has no boundaries’ for India-Pakistan superfan friends 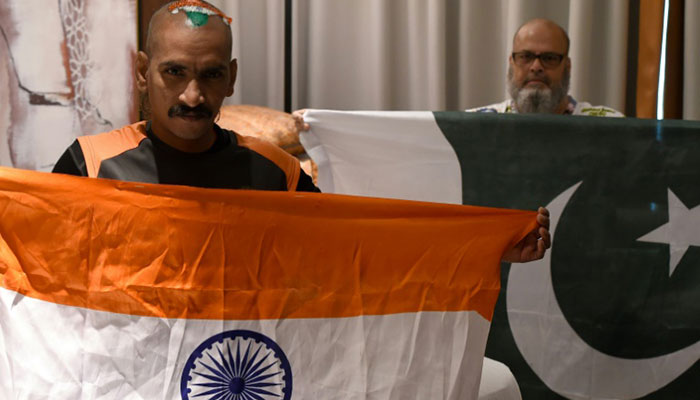 Their governments might not be ready for talks, but that did not stop Pakistan’s Mohammad Basheer opening his heart, and his wallet, to ensure India’s most recognized cricket fan Sudhir Kumar could be at the Asia Cup. The 37-year-old Kumar, from Muzaffarpur, Bihar, has travelled all over the world supporting India but was resigned to missing the tournament in the UAE, which concludes this week, after his childhood hero and sponsors Sachin Tendulkar could not be reached in London.

“I called Kumar to ask when he is coming to Dubai for the Asia Cup,” Basheer told AFP.  “But I found him a bit disheartened because of no sponsorship, so I paid for his ticket and stay in Dubai,” added the Chicago-based Pakistani. Basheer’s kind gesture brought the two together, sharing a room in India’s team hotel in Dubai. Unfortunately for Basheer, his gesture meant also that Kumar twice saw India beat Pakistan in the group stages of the regional six-team showpiece.

“India and Pakistan not playing each other in their countries is sad and I always pray that relations get back to normal so that we can play each other,”

And although Pakistan missed out on Friday’s final after losing to Bangladesh on Wednesday night, Kumar will be there to support India against the Tigers, as will his old friend from across the border. Kumar first encountered Basheer during the 2011 World Cup on the sub-continent. The pair became firm friends and have been getting together at India-Pakistan matches ever since.

“I owe this tour to Basheer who has shown that friendship has no boundaries,” said an elated Kumar. “We pull each other’s legs during the matches but at the end of the day cricket brings people of the two nations closer.” Cricket’s fiercest rivalry charges up fans from Kolkata to Karachi and millions from all over the world.

Basheer said nothing compares to an India-Pakistan match and admitted to slightly split loyalties. “My wife is from Hyderabad Deccan in India, so I support India because of my wife and Mahendra Singh Dhoni and Pakistan because it is my country of birth,” said Basheer, who runs a restaurant in Chicago famous for Biryani a spicy rice dish popular on both sides of the border. Dhoni, the former Indian captain who still stars as a wicketkeeper-batsman in the one-day side, often gives Basheer match tickets.

Kumar said he was happy to remain a bachelor because he was already “married to cricket.” “Every time my elders ask me to marry I run away from home for cricket. I have left various jobs to satiate my thirst for the game, which is my life and wife.” When India won the 2011 World Cup, Kumar was invited to the dressing room to have a picture with the trophy his greatest honour.

Pakistan on a Bike

Kumar has seen India play in 64 Tests, more than 300 one-day internationals and 72 Twenty20 internationals, but said his most memorable tour was to Pakistan in 2006. “I can’t forget the Pakistan tour for the love and following I received,” said Kumar, who spends hours decorating his head and body with enamel paint and carries an Indian flag to every venue.

“I have high hopes with Imran,” said Kumar. “I await the day when we play each other in their country … that day will come.”

“I went through various hassles to get a visa for Pakistan and when I reached Wagah on a bicycle they initially did not allow me to cross the border but somehow I managed.” Basheer too gets a warm reception every time he tours India, the last being in 2016 for the World Twenty20.

“People-to-people love exists, no matter what happens at the top level,” said Basheer. India suspending cricket ties with Pakistan in the wake of 2008 Mumbai attacks hurt both Basheer and Kumar. “India and Pakistan not playing each other in their countries is sad and I always pray that relations get back to normal so that we can play each other,” said Basheer, who can sing a great repertoire of Bollywood songs.

Kumar hopes cricketer-turned-politician Imran Khan’s elevation to Prime Minister of Pakistan will pave way for a revival in relations at a sporting level. “I have high hopes with Imran,” said Kumar. “I await the day when we play each other in their country … that day will come.”

Will peace in Afghanistan bring back “Dark age” for media?