Dalits uprising in India: a political sham that promotes violence 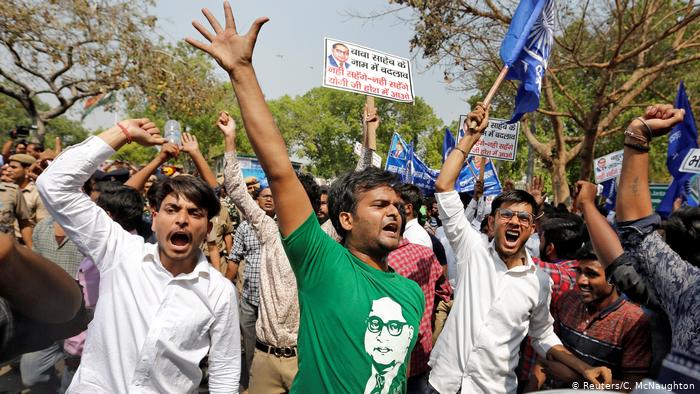 Pakistan marked a “Black Day” over the crisis in Jammu & Kashmir recently and India hit back with a strong statement asking Pakistan to vacate the parts of Kashmir it “occupies”, while noting that the “Black Day” events were led by “UN-designated terrorists” who had also protested the elimination of Osama bin Laden.

Even as both countries return to their familiar sniping, some of us who have seen this state of bloody-mindedness before can only wonder when India and Pakistan will stop taking advantage of the other’s weaknesses. Especially when there are so many other issues bedeviling our combined population of 1.5 billion people, no less.

Like the recent revolt by Dalits in India, against “cow-worshippers” or “gau rakshaks,” which in BJP-run state governments like Gujarat, Maharashtra and Haryana have turned the fine art of disdaining the eating of beef into a political sham that promotes violence.

Even as both countries return to their familiar sniping, some of us who have seen this state of bloody-mindedness before can only wonder when India and Pakistan will stop taking advantage of the other’s weaknesses.

Come to think of it, the “cow-worshippers” are getting their just desserts. A mere year after the newly elected governments in Haryana and Maharashtra banned the eating of cow meat, Dalits across India are rising up and protesting the ban against skinning cows, especially those who have passed their sell-by date.

So last week Dalits in Gujarat, supported by Muslims, brought Ahmedabad to a standstill, protesting the flogging of four Dalit youth in Una. As Chief Minister Anandiben Patel was sacked, the village headman wanted to know who was now going to skin the dead animals and clean up the aftermath?

Who is a Dalit?

As the ground, once again, shifts beneath our feet, its time to ask the old question: Who is a Dalit? B. R. Ambedkar, of course, had one answer. The well-known subcontinental writer, Mohammed Hanif of Karachi, has another, in his book, Our Lady of Alice Bhatti. “These Muslas”, says a protagonist, “will make you clean their sh*t and then complain that you stink.”

All of us upstanding folks who talk about religion being the defining factor that separates India from Pakistan forgot to ask its Dalits. And so, while the folks were willing to kill each other for honour and nationhood and revenge, in 1947 and over the several wars later, the Dalits of India and Pakistan mostly stayed put wherever they were.

If you ask the Dalits — and certainly, no one’s asking them because they don’t have the political power to show their strength — partition was not only a sham and a conspiracy, it was another way of keeping them in their place. Who cares to talk about the many humiliating ways in which we treat the people who clean carcasses, mend our shoes and take away the human waste from our dry latrines?

All those in Rawalpindi and New Delhi reading this will, of course, shrug their shoulders and open the next file that deals with “How to Mark Another Black Day” or, tell the people of Kashmir that “You Are Our Children, So Please Get Back to School?”.

Certainly, it is entirely unnecessary to ask the family of Jogendra Nath Mandal, Pakistan’s first Minister for Law and Labour and an untouchable to boot, who supported Jinnah’s transformation into the Qaid-e-Azam — but whose touch and presence and political power could not be tolerated by Pakistan’s upper-caste Muslims, especially former Prime Minister Chaudhry Ali.

Mandal was forced to migrate back to his beloved Calcutta, where he spent the rest of his days being taunted by upper-caste Hindu folks for his double betrayal. The betrayal against “Hinduism” and the betrayal for preferring Pakistan to India.

So even as Kashmir has been blowing up in India’s face in recent weeks, India’s Dalits have been rising up in revolt. The stage is being set for another political confrontation across north India’s heartland, in Uttar Pradesh, Punjab and Gujarat where elections will be held next year, and where Dalits live in large numbers.

Surinder Jodhka, a professor of Dalit Studies at Delhi’s Jawaharlal Nehru University, points out that the Dalit landscape is changing, and that in the post-liberalisation period, a “new Dalit-ness is emerging.” These young men, from Rohith Vemula to the Gujarat Dalit youth who committed suicide in protest against the Una flogging, are not afraid to use suicide as protest against the existing caste superstructure.

But, with the BJP adopting Ambedkar as its new icon, Jodhka says the contradictions between Ambedkar’s “anti-Hindu” writings and the RSS’ emphasis on Hindu-dom will only deepen.

A new dilemma looms large on the horizon. The BJP’s Dalit leaders, especially those who joined the party on the eve of the 2014 Lok Sabha election as they got caught up in the pro-Modi wave sweeping India at that time, are increasingly afraid that they will be marginalised by their own community.

Unlike Union Minister for Social Justice and Empowerment, Thawar Chand Gehlot, a Dalit leader who was brought up within the RSS-BJP fold, several BJP Dalit MPs are concerned that the party is not coming down on cow vigilantes as hard as it should. They fear that if the BJP doesn’t crack down, they will be marginalised in favour of activists from the street — and much more hardline in the bargain.

Meanwhile, Home Minister Rajnath Singh is visiting Islamabad for SAARC home ministers conference — but it may be real to test the waters for the SAARC Summit scheduled to be held later this November.

Will Prime Minister Narendra Modi go to Pakistan for the Summit? Or will he be swept up in the changes currently sweeping India, from the unrest in Kashmir to the Dalit refusal to accept the status quo?

Those answers await us all.

This article was first published in India Writes.

TikTok blamed for censoring of hashtags related to US protests