President Bashar al-Assad's government condemned new US sanctions imposed on Syria Wednesday, calling them a form of "terrorism". Analysts fear that these sanctions will impact the Syrian people most of all, and will lead to various sectors of the economy crashing. 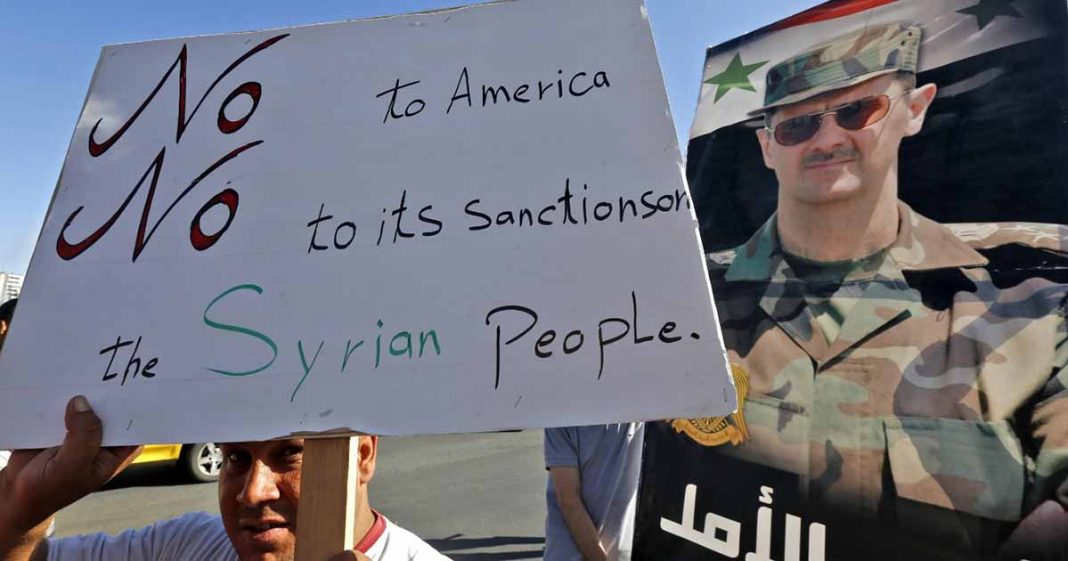 President Bashar al-Assad’s government condemned new US sanctions imposed on Syria Wednesday, calling them a form of “terrorism” perpetrated by Washington in the war-scarred country.

The measures are the first to take effect under the Ceasar Act, which punishes any companies that work with Assad and seeks to prevent his normalisation without accountability for human rights abuses. It also blocks US reconstruction assistance.

US sanctions on Syria called out for hypocrisy

The first designations target 39 people or entities, including Assad and his wife Asma — the first time she has been slapped with US sanctions.

“The first batch of US sanctions against Syria under the so-called Ceasar Act reveals US violations of international laws and norms,” said a Syrian foreign ministry statement, likening the behaviour of the US administration to that of “gangs” and “robbers”.

It accused Washington of “hypocrisy” for justifying sanctions in the name of human rights.

US support for “terrorism” in Syria went against such principles, it added, referring to opponents of Assad’s government.

“The tightening of sanctions against the Syrian people is a new dimension and form of this terrorism,” said the statement released on the official SANA news agency.

Damascus warned earlier this month the sanctions would cause more suffering in a country already deep in economic crisis.

The sanctions target sectors including construction, the military, and oil and gas, while the central bank could be labelled a “financial institution of primary money laundering concern”.

Read more: Caesar Act in Syria: what is effect of US sanctions?

“The US has yet to clarify where — or to what extent — the sanctions will be implemented, but it’s safe to say that the real estate, construction, energy and infrastructure sectors will be particularly affected,” said Edward Dehnert, an analyst at The Economist Intelligence Unit.

Dehnert said the measures would complicate food and fuel imports, and push more Syrians into poverty.

“Unfortunately the Syrian people will suffer the most,” he said.

“Syrians will suffer a further erosion to their purchasing power, while employment opportunities continue to contract.”

Syria’s central bank on Wednesday devalued the pound after the currency depreciated for weeks on the black market in anticipation of the US measures.

“The Caesar Act aims to starve Lebanon just as it aims to starve Syria,” Hassan Nasrallah, head of Lebanon’s Hezbollah movement which supports the Damascus regime, said in a televised speech on Tuesday night.

The government in Beirut has set up a committee to start studying the possible impacts on its many trade links with Syria.

Lebanon is already virtually bankrupt and fresh restrictions on its access to the Syrian reconstruction market are likely to make things worse.

Why is the US sanctioning Syria?

US Secretary of State Mike Pompeo called the sanctions “the beginning of what will be a sustained campaign of economic and political pressure to deny the Assad regime revenue and support it uses to wage war and commit mass atrocities against the Syrian people.”

Pompeo said the goal was to force Assad into accepting Security Council Resolution 2254 of 2015 — which called for a ceasefire, elections and political transition in Syria.

Read more: War in Libya and Syria getting out of control!

The European Union has imposed its own sanctions over Syria.

A French court separately on Wednesday convicted an uncle of Assad over money-laundering and misappropriation of government funds.

The Caesar Act is named after a former Syrian military photographer who fled at great personal risk in 2014 with 55,000 images of brutality in Assad’s jails.

Among Washington’s many conditions for any future lifting of sanctions are establishing “meaningful accountability for perpetrators of war crimes”, an end to regime or Russian bombardment of civilians, the freeing of political detainees, and the safe return of refugees.

“The Caesar Act is the latest iteration of ongoing US efforts to force a political settlement, and enact… the removal of (President) Bashar al-Assad,” Dehnert said.

“We don’t see this happening any time soon. Mr Assad’s position is secure,” he added.

But the sanctions might be somewhat successful in “impeding the extent to which the regime and its cronies are able to profit from the economic opportunities” provided by reconstruction.

“The sanctions are designed to maintain the Assad regime’s status as a pariah, and the threat of US punitive action will be enough to scare off the majority of foreign investment,” he said.

Taliban and US can be peace partners: PM Khan’s interview to...

News Desk - 24 September 2021
PM khan while giving an interview to Newsweek said that Taliban, US and Pakistan collaboration can bring lasting regional peace as the spillover of militancy from Afghanistan is a looming threat for Pakistan and region as a whole.

US threatens Iran with UN sanctions if arms embargo ends