Deaths from Covid-19: Who should take more caution?

Those most vulnerable to contracting Covid-19 are not only the elderly but others with underlying conditions such as the obese, the majority of whom are aged under 65. 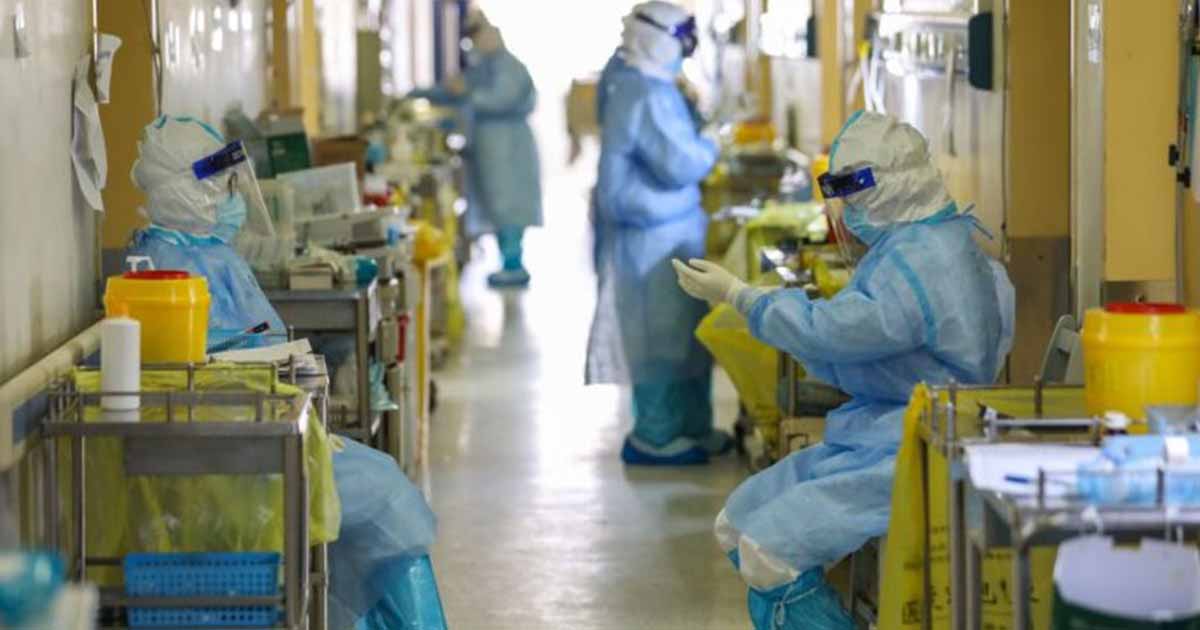 World coronavirus (Covid-19) cases are officially well clear of the four million mark, with about 300,000 deaths currently attributed to the disease. These are the cases and fatalities that have been reported. The real coronavirus figures may be considerably higher.

As things stand, the overall global death rate from Covid-19 continues to hover at around 7%, indicating that Covid-19 is clearly far more harmful than influenza (flu). Each year up to 10% of the world’s human population contracts the flu – of those between 290,000 to 650,000 people succumb per annum to flu-related illnesses. According to the World Health Organisation (WHO), this comprises an annual mortality rate globally from the flu of “usually well below 0.1%”.

The current Covid-19 death rate among many of the world’s worst affected countries is disturbingly high. In Belgium the death rate is presently at 16%, in France it is 15%, in the UK 14%, in Italy 14%, in the Netherlands almost 13%, in Sweden it is 12%, while in Mexico and Spain it is just over 10%. A couple of other nations, with high case numbers, have much lower reported death rates, notably Germany with just over 4%, Turkey on less than 3%, and Russia on fewer than 1%.

Russia’s Covid-19 mortality level is unusually low, especially considering their rapidly increasing cases. An account published earlier this week, with the Financial Times, outlined that the Russian Covid-19 death toll “could be 70% higher”. It remains to be seen if such claims are close to the mark.

The coronavirus crisis is having devastating impacts worldwide, above all economically, rather than in the number of lives so far lost, with a 7.8 billion population. It is quite likely to be the worst economic disaster since the Great Depression struck nine decades ago. Growing likelihood of a contagious disease emerging, and then spreading worldwide, was previously well known to government authorities and institutions. However, in the rapacious neoliberal era, governments are ignoring the warning signals and proving impotent in addressing such problems, as they are dominated by the whims of mega corporations.

Taking steps to eradicate the potential of a viral outbreak was simply not attractive to big pharmaceutical companies, because there was no money to be made from it. It seems that Covid-19, rather worryingly, is a disease which will flourish at all times of year and in both hemispheres simultaneously, unlike the flu. The WHO outlined that, “Covid-19 virus can be transmitted in any climate, including areas with hot and humid weather”.

Coronavirus cases in Brazil, a Southern hemisphere state, are increasing and number many thousands each day, among the world’s highest rate. Day time temperatures across Brazil remain close to 30 degrees Celsius, including in the cities worst hit by the virus such as Manaus, Recife and Sao Paulo. Brazil’s official Covid-19 death rate is presently at 7%, the global average, with more than 13,000 Brazilians said to have succumbed at least partly due to the virus. A true death toll in Brazil is most probably higher, because of inadequate testing coverage.

Read more: COVID-19 could cause 45% surge in child mortality in developing countries: UN

Iran, one of the planet’s hottest countries, is among the most badly affected places with Covid-19. Over 110,000 official detections have to date been recorded in Iran, and almost 7,000 Iranians have died. There are indications over the past month that the disease is being smothered, but hundreds of cases are continually noted in Iran each day. In northern Europe, Sweden, a country which also has commendable egalitarian policies, it has stood out in her authorities’ “unique strategy” in refusing to enact a complete lockdown.

Is there a possibility of a second wave?

On per capita figures Sweden, with a 10 million population, has one of the world’s worst coronavirus records. More than 3,500 Swedes are reported to have perished from the disease out of less than 30,000 cases, revealing a 12% death rate, which is in contrast to other Scandinavian countries like Denmark (less than 600 deaths), Finland (less than 300 deaths) and Norway (less than 300 deaths). Sweden’s state epidemiologist, Anders Tegnell, said last week that humans will have to endure Covid-19 “for a very long time” and that “In the autumn there will be a second wave”.

Nevertheless, still in early summer, there are signs of a possible second wave breaking out in rich countries like Germany and South Korea, who had initially contained the virus. Following an easing of restrictions, in recent days new coronavirus clusters have been found, such as among German soccer players and in slaughterhouses and nursing homes in the country. Covid-19 clusters in South Korea were traced to nightclubs and bars over the past week, following the hasty reopening of such venues, where the spread of bodily fluids is unavoidable and social distancing impossible.

Immunity against Covid-19: can a person get reinfected?

Tegnell, the Swedish state disease expert, insists by autumn time “Sweden will have a high level of immunity” while “Finland will have a very low level of immunity”. These comments regarding supposed Covid-19 immunity contradict the WHO’s analysis from late April – when the world body stressed that there was “no evidence” recovered Covid-19 patients will thereafter develop immunity. The WHO is supported in its analysis here by medical experts on the ground. Randell Wexler, a primary care physician based in Ohio, wrote of the coronavirus during mid-April that, “there’s no vaccine and no natural immunity in the world, meaning everyone is susceptible”.

Read more: Covid-19: Keep this in mind before easing the lockdown

Wexler’s opinions are in turn backed by the British government’s chief medical adviser, Christopher Whitty, who himself contracted the coronavirus towards the end of March, before recovering. Whitty, a physician and epidemiologist, told a Commons science and technology committee in late April that there is “concerning” proof suggesting it might not be possible to generate immunity to Covid-19.

Whitty informed the committee, “There is a little bit of evidence that some people may have been reinfected” with Covid-19 “having had a previous infection, which is a slightly concerning situation”, demonstrating no immunity was developed. Whitty continued that if there is no natural immunity to Covid-19 “it does not make a vaccine impossible, but it makes it much less likely”; while he warned against premature lifting of lockdowns, which could result in a “serious second wave” of infections.

Most vulnerable segments in the society

Those most vulnerable to contracting Covid-19 are not only the elderly, but others with underlying conditions such as the obese, the majority of whom are aged under 65. Obesity sufferers, who can range in age from children upwards, are also more likely to have embedded health problems like diabetes and high blood pressure. Obese people have excessive weight on their chests, which causes reduced pulmonary function. Covid-19 is a disease that targets the lungs, so it is a significant problem.

The threat that Covid-19 poses to the obese, and consequently to others, sadly does not end there. Donal O’Shea, a physician and leading obesity expert in Ireland, a country where 25% of the population is obese, said earlier this month of Covid-19 that, “a patient who is overweight or obese may have the virus for a longer period before they become symptomatic, and when they become symptomatic they will get the condition to a worse degree, and they will remain infective for longer than people who don’t have obesity”.

As the above reveals, there are even more complications to that of being excessively overweight and catching Covid-19. O’Shea said obese patients, “also get a more severe form of the illness [Covid-19] and are more likely to need intensive care treatment, and more likely to need intubation and ventilation while in intensive care”. Recent studies are suggesting obesity increases the risk of death from Covid-19 by almost 40%.

America has by far the world’s highest number of Covid-19 cases, with almost 1.5 million people officially infected so far, and over 85,000 Covid-19 related deaths recorded, a mortality rate of 6%. More than 35% of the US population suffer from obesity.

The Lancet, one of the most prestigious medical journals, reported in early May on the volumes of young and obese admitted to Intensive Care Units (ICUs) in American hospitals. The Lancet authors wrote about the burgeoning numbers of very overweight, young people entering the Johns Hopkins Hospital in Baltimore, from late March 2020, and how “other hospitals around the country yielded similar findings”.

The Lancet concludes that, “in populations with a high prevalence of obesity, Covid-19 will affect younger populations more than previously reported”.

Read more: COVID-19: Question of survivability of 1.4 billion Indians with no exit strategy

Of Covid-19 and the flu, there are crucial differences in distinguishing between the two illnesses. The flu season has ended in the Northern hemisphere for a few months, and is just starting in the southern half of the globe. Wexler, a family doctor in Ohio, reveals that the coronavirus is highly infectious and can be disseminated over a longer period. He wrote, “Covid-19 spreads more easily than the flu. The incubation time from exposure to first symptoms for the flu, 1 to 4 days, is short compared with 1 to 14 days for Covid-19”.

Research work by medics highlight that almost half of all people have in-built defences against the flu, which can subsequently prevent it from infecting their bodies. Furthermore, according to the CDC, America’s national public health institute, “flu vaccination reduces the risk of flu illness by between 40% and 60% among the overall population”.

Along with the elderly and the obese, ethnic minority groups are prone too in contracting the coronavirus and succumbing to it. They are more likely also to have other underlying conditions. The susceptibility of ethnic minorities to Covid-19 is becoming more common around the world, as expounded on by the Lancet medical journal. In Britain for instance, up to April 30th, of over 6,500 Covid-19 intensive care patients a third of them “were from non-white ethnic groups”.

Read more: Coronavirus is 10 times deadlier than the 2009 swine flu: WHO

Early studies in the US show that African-Americans are disproportionately affected by Covid-19, making up 33% of hospitalisations in 14 US states. Many from minority backgrounds are working at the frontline, and in low paid jobs that have not been axed, where they are more exposed to picking up the virus.

Shane Quinn has contributed on a regular basis to Global Research for almost two years and has had articles published with American news outlets People’s World and MintPress News, Morning Star in Britain and Venezuela’s Orinoco Tribune. The views expressed in this article are the author’s own and do not necessarily reflect Global Village Space’s editorial policy.

News Desk - 30 July 2021
Canadian High Commissioner said, “We are proud to be part of this journey to strengthen Pakistan’s medical sector."

Blood clots becomes number one cause of COVID-19 deaths