Debating the Educational structure in Pakistan

The educational structure in Pakistan has been discussed deeply and here is an analysis of how flawed the structure is and what immediate steps need to be taken. 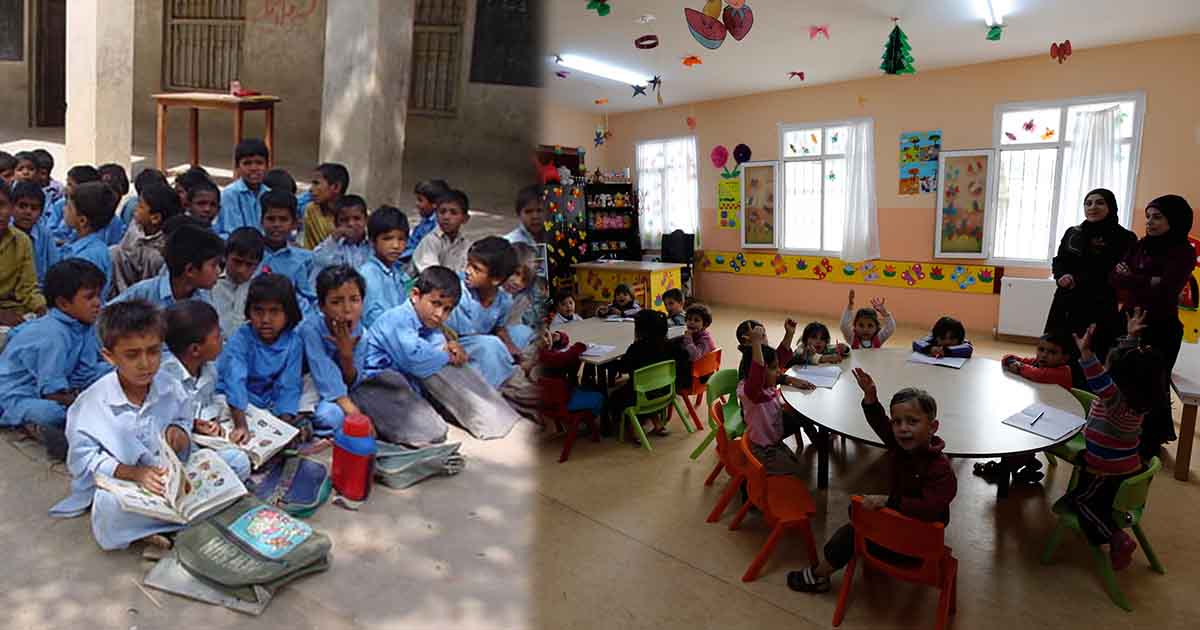 Pakistan is changing. There can be contrasting and contradictory accounts on the nature and scope of the change. But one thing is established; Pakistan is changing. The security establishment is for politicians what MQM was once for residents of Karachi a few years ago. Politics is getting toxic, undemocratic and authoritarian tendencies are being consolidated. Politicians are complaining and protesting against the ‘selective’ accountability. Patriarchy is being widely challenged.

In a changed and increasingly changing Pakistan, the most encouraging development is open debate on education system of Pakistan. Recently, some scholars dared to write on the topic and offered insightful and interesting accounts to reform, upgrade or alter the education system across the country.

This piece is an attempt to contribute something to the ongoing debate in order to develop the discourse. I am more concerned about the basic philosophy and purpose of education rather than organizational structures that ensure smooth policy implementation.

I found this debate interesting and thrilling since in a country like Pakistan it’s very rare that scholars decide to openly write about a matter and welcome different ideas.

Dr. Tariq Banuri, Chairman Higher Education Pakistan, outlined his vision of higher education in Pakistan and its future in a recent TV show. His flagship initiative particularly focuses on spending more resources and energy on upgrading undergraduate teaching across the country. Dr. Hoodbhoy-MIT graduate, wrote an article ‘HEC — stormy times up ahead’ and presented two different, rather contradicting, visions of two learned educationists about the future of higher education. He found the HEC’s chairman’s project plausible and in-line with modern education system being practiced in the top American universities.

Dr. Atta-ur-Rahman, former chairman HEC, has a different view of widening and strengthening postgraduate research program in Pakistan and produce more PhDs. He believes without focusing on higher-level research Pakistan “can never become a world power in science, technology, and innovation” ‘Higher education in turmoil’.

Later on, Dr. Anjum Altaf, former Dean of Social Science at LUMS, on the invitation of Dr. Hoodbhoy joined the debate and supported Dr. Banuri’s vision, Dr. Anjum Altaf. From his standpoint, a robust undergrad program is a prerequisite for an excellent Ph.D. program. ‘Debating Education’

I found this debate interesting and thrilling since in a country like Pakistan it’s very rare that scholars decide to openly write about a matter and welcome different ideas.

Read more: Education: A luxury afforded by the rich

However, I find the debate a little misleading if not completely mistaken. In any debate on education in Pakistan, it is important to determine the meaning, purpose, and scope of education at the outset. Similarly, it is also imperative to explore the role of universities in a society like ours before we decide to have more universities to produce innumerous PhDs. Although Dr. Hoodbhoy has written extensively on the subject yet forgot to incorporate it here.

Bertrand Russell, a renowned British philosopher, wrote an interesting book On Education: Especially in Early Childhood in 1926. He outlined his scheme of education, its purpose and scope for a society that desires to be progressive, developed and liberated. In Russell’s view, there are two purposes of a university in a society:

“One, to train individuals for various professions.

Two, to pursue learning and research without regard to immediate utility.”

But he regrets when he notes that “the idea of old fashioned schoolmasters persists to some extent at universities. There is a desire to have a good moral effect on students, and a wish to drill them in old-fashioned, worthless information, largely known to be false, but supposed to be morally elevating.”

There may be an immediate change in the course content in order to make it inclusive and modern in its tone. The government can arrange workshops and training sessions for those fresh graduates teaching in school across the country.

In societies like ours where religiously conservative political elite has more say than any educationists while making policies, it is useless to put more focus on undergrad and postgraduate programs. Russell focused on educating children up to the age of five. His idea was to impart critical thinking and inclusiveness in children to ensure undisrupted learning process in rest of their lives. A child after being indoctrinated at school and college can be anything but not a student in widest sense of the word. Our physics and mathematics students despite learning about logic and reasoning are found to be religious extremists and hold highly exclusivist political ideology.

In my opinion, there needs to be focus on school education in Pakistan. The intention must be of liberating education from ideational and dogmatic assertions to produce free-minded individuals with the ability to question and conquer.

Undue focus on higher education may not prove productive since the base is not going to be challenged. Practically speaking, there are some PhDs from America and UK but behave like a Pakistan study student when it comes to religion, politics, and democracy. These examples urge us to focus on reforming our school education.

There may be an immediate change in the course content in order to make it inclusive and modern in its tone. The government can arrange workshops and training sessions for those fresh graduates teaching in school across the country. This project is time taking and demands serious policy framework, but once developed Pakistanis will feel the change in next 20 or so years.

Who will Nawaz fight against after returning to Pakistan?

Self-aware Pakistanis vs the influential and power-wielding elite

Increasing foreign debts: When will Pakistan be truly ‘independent’?