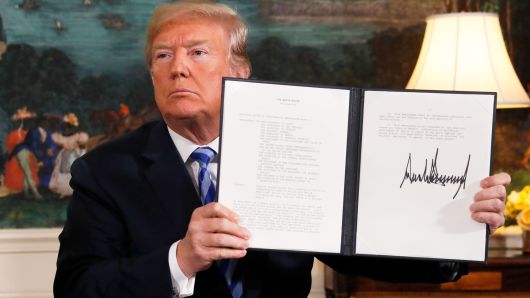 There is an old impish yarn that Noah was stunned to see the two cats he’d put in the Ark trooping out with a bunch of kittens at the end of the tumultuous existential journey. Seeing the old sage’s puzzled look, the adult male shot back, ‘You thought we were fighting?’ This in some ways captures the noisy, implausible games that Iran and the United States play with each other, growling at each other and making us feel worried at times.

Trump and his Iran policies

The Trump administration has twice certified to the Congress that Iran is complying with the nuclear deal – an agreement he vowed to tear up.

President Donald Trump is having a difficult time to differentiate his Iran policies from Barack Obama’s. The Trump administration has twice certified to the Congress that Iran is complying with the nuclear deal – an agreement he vowed to tear up. But, while doing so on Monday, with an eye of the Israeli lobby, it separately imposed sanctions against a clutch of Iranian personalities and entities – so that the optics look appropriately ‘tough’.

The Trump administration understood perfectly well what it implied – namely, that things can overnight hot up for the US on the ground in the Syrian and Iraqi theater.

Tehran had conveyed a red line to Washington in the weekend that there shall be no sanctions against the Islamic Revolutionary Guards Corps (which is spearheading Iran’s operations against ISIS in Iraq and Syria). The Trump administration understood perfectly well what it implied – namely, that things can overnight hot up for the US on the ground in the Syrian and Iraqi theater. (For the uninitiated, IRGC-backed militia and American military advisors tacitly collaborate in the liberation of Mosul.)

In fact, Majlis passed a finance bill Tuesday increasing the budget allocation for the missile program and Quds Force each by $260 million.

Tehran understands that Trump is a bluff master. Read the Iranian Foreign Ministry statement here. Clearly, no one is losing sleep in Tehran. Iran’s missile program is indigenous; nor will US sanctions frighten IRGC’s elite Qud’s Force under the command of its charismatic general Qassem Soleimani to give up the ‘axis of resistance’ in Syria and Lebanon (and Gaza.)

Read more: U.S Iran nuclear deal: what will be its implications

The Middle East is witnessing a long sunset of the US hegemony. And Iran senses it. So, Tehran is playing its cards astutely through an admixture of strategic defiance and taunts with unspoken overtures seeking meaningful conversation.

Mohammed Javed Zarif and his point of view

Read the transcript, here, of a fascinating interview by National Interest magazine with Iranian FM Mohammed Javed Zarif who is visiting New York. (Zarif already addressed the CFR and was interviewed by CNN’s Fareed Zakariah and the PBS, amongst others.)

Read more: No carrots, all sticks: Washington upping the ante against Iran

Iran is doing just fine. The genius to optimally put diplomacy to use, with maximum cost-effectiveness, has been Iran’s strategic asset in the politics of the Middle East.