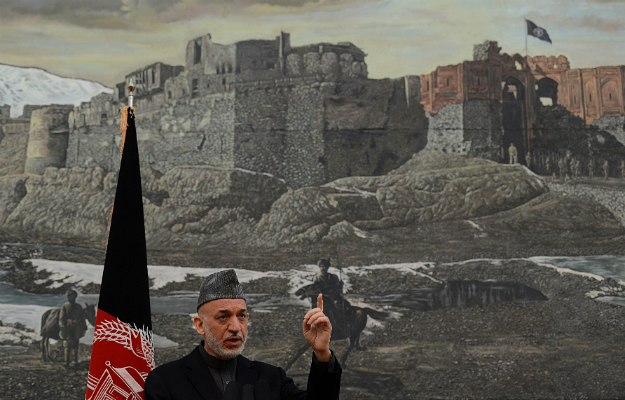 What if words do the job better than actions for you? What if words justify your preeminent position in the system by keeping others tamed and demonized? Contemporary politics is evolving today where armed clashes are increasingly becoming irrelevant, but war is continued through words – written or spoken. Discursive words create social reality and get it accepted as legitimate by the target audience through certain modalities.

The post-modernist trinity; Lyotard, Foucault, and Derrida help people deconstruct the complex narratives and the ugly lies of the powerful in the world. Where power, discrepancy, dominance, and compliance are produced through a systematic use of language, institutional power, and media tools equipped with mind numbing representations by paid spin doctors.

This reflects the deeper divisions he is facing at home on the issues of Afghanistan, DACA, withdrawal from TPP, travel ban on Muslims, Iran Nuclear Deal, Climate Change, and Russian connections.

For deconstruction, one needs to view all narratives with incredulity since the world, we live in, is non-transparent imagery. Politicians, authors, and analysts discuss events subjectively by choosing certain words to create certain effects. Thus, reality of this intertwined world is based on representation and perception – managed through information maneuvers.

This piece aims to deconstruct the discourse that president Trump wants to foment by politicizing Afghan peace with directional representation in the new policy for “Afghanistan and South Asia”. This extreme securitization of Afghan peace will help US justify extreme measures to be followed in the future.

Read more: Why will US military continue to fail in Afghanistan?

While addressing the war bureaucracy of the pentagon at a military base, nothing could have been a better strategy than exalting war heroics of the service men to control the minds for the wars to come. In his policy speech, Trump sets out by owning the selfless courage of deceased US military men by denouncing all fault lines like race, creed, and color that can divide American society in his bid to put them [military] to tougher jobs to come in the Afghan quagmire.

He uses presidential power to speak as the global leader for world peace that he believes in because of brave US soldiers. He deliberately downplays the US failures and frustration in Afghanistan by appreciating military’s role in averting 9/11 like attacks.

He has demonstrated that he is a realist who has given his unconditional consent to his generals to use force in pursuit of a decisive win in Afghanistan and the South Asian region at large.

He lays out his strategy on three fundamental conclusions. His first and second conclusion make a case to continue military presence in Afghanistan by invoking a discourse of danger, fearing the loss of hard earned accomplishments gained through sacrifices.

To make US military presence accepted, he shrewdly compares Afghanistan with Iraq’s US withdrawal that presented a security vacuum to ISIS and Al-Qaeda. By using words, ‘mistakenly’, and ‘withdrawal’, he highlights Obama’s policies as ‘failures’ to project himself as a potential success and precipitates a fear of Taliban recapture of Afghanistan.

In third conclusion he amplifies the intensity of the threats emanating from Afghanistan and the larger South Asian region to broaden the threat spectrum to bring India in to the US and Afghanistan side of the game while leaving Pakistan as an ‘other’ to be fixed through extra ordinary means. History reveals that US has always used danger to sustain and define what the world should fear. Because this discourse organizes actors in friend and foe categories. Friends become allies whereas foes are fought with.

He, then mentions Barcelona attacks to create a ‘we’ feeling and attract already waning European support for his vision. To alarm US allies, Trump describes terrorism, Pakistan, and fear of Pakistani nukes ending up into the hands of terrorists.

Convincingly, new policy, as its title illustrates, is a discourse of a declining super power to expand the scale and scope of the Afghan quagmire for its regional and global geostrategic ambitions.

His new strategy exposes that the realist Trump is more inclined towards winning this battle through the use of force than in nation building and democracy promotion. This is yet another break point from Obama’s concept of Afghanistan as Trump believes in shaping the favorable situation proactively than waiting for friendly circumstances.

Trump, while discussing Taliban, ties them with Pakistan to form a ‘clash regime’ that poses a threat to the Afghan government, US and India, the ‘truth regime’. After constructing the enemy image of Pakistan, he then, issues a naked ultimatum to Pakistan of dire consequences if it opts for defiance against US.

This otherization of Pakistan through organized use of language creates an inequality that reduces Pakistan’s autonomy at the hands of the US – as the master. This discourse represents the power relationship of a master slave setting that necessitates compliance from Pakistan. This is how a manipulative and coercive powerful USA controls the less powerful states to self-serving ends.

In his speech, US president spoke from the position of power and connected terrorism with the nuclear capable Pakistan to trigger a directional debate to create emergency and urgency on the world stage by demonizing Pakistan as a terror sponsoring state. This distorted version of reality sets a context with possible double effects; prompts Pakistan to do more – as US dictates, and manufactures consent and legitimacy for the actions and events to come against Pakistan.

History reveals that US has always used danger to sustain and define what the world should fear. Because this discourse organizes actors in friend and foe categories. Friends become allies whereas foes are fought with.

The speech has a cautious order; Taliban, violence, and insecurity are knotted with Pakistan – making it a spoiler and part of the problem. In a second instance, India is introduced with its democratic credentials and economic contribution as a peace builder and part of the solution in Afghanistan.

This gracious recognition of India’s benevolent role in Afghanistan is an effort to lure India for greater responsibility in Afghanistan and has bearings in Indo-Pacific region vis-à-vis China. In that case, it is a perfect quid-pro-quo deal by a businessman who does not believe in free rides.

Convincingly, new policy, as its title illustrates, is a discourse of a declining super power to expand the scale and scope of the Afghan quagmire for its regional and global geostrategic ambitions. This discourse also provides US the scapegoats for its military failures in Afghanistan and justification of staying in the region.

The policy leaves Pakistan with two choices; either to stay ‘in’ or ‘out’ of this world system characterized US allies and foes. If it is to stay ‘in’ with US then it [Pakistan] will have to ‘do more’ and if otherwise, it will have to face the consequences in terms of territory loss, Tillerson warns.

To create a ‘WE’ feeling at home and in alienating Europe, Trump used ‘we’ and ‘us’ words more than 138 times in his speech. This reflects the deeper divisions he is facing at home on the issues of Afghanistan, DACA, withdrawal from TPP, travel ban on Muslims, Iran Nuclear Deal, Climate Change, and Russian connections. He has demonstrated that he is a realist who has given his unconditional consent to his generals to use force in pursuit of a decisive win in Afghanistan and the South Asian region at large.

Zahid Mehmood is PhD (IR) Candidate at National Defence University Islamabad, Pakistan, and a visiting faculty at NDU and Lecturer at National Officers Academy, Islamabad, Pakistan. The views expressed in this article are the author’s own and do not necessarily reflect Global Village Space’s editorial policy.

Aid cuts by US to hurt Pak-Afghan border monitoring