Deep inside Kashmir militancy: how damaging can the cracks be for the movement? 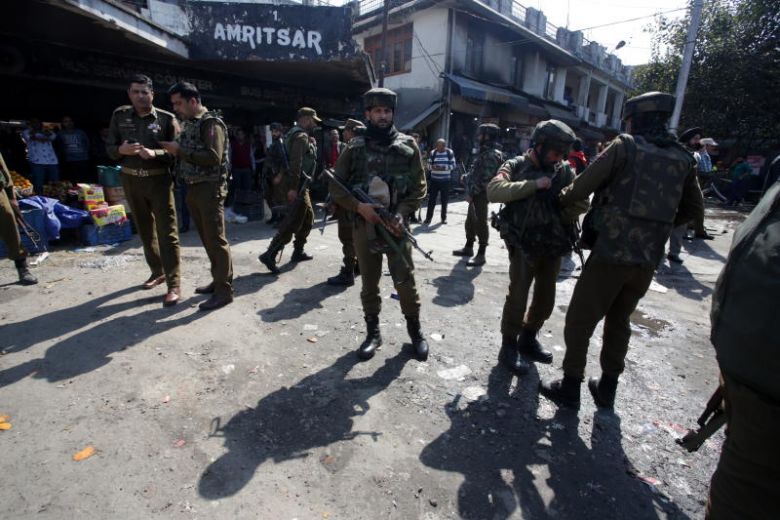 On April 7, 2017, a group of unidentified militants appeared in the death anniversary of a Kashmiri Freedom fighter Naseer Pandit in Pulwama, a district in south Kashmir. The militants after firing some gunshots in the air warned the crowd against supporting Pakistan. The group asked people to wave black flags with Kalima of Islam written on them instead of the Pakistani flag. Those militants later went on to identify themselves as “Taliban-e-Kashmir” with a pro-Taliban and Anti-Pakistan stance.

In May, Zakir Rashid Bhat known as Zakir Musa who was the successor to Hizb-ul-Mujahideen’s slain Chief Burhan Wani threatened to chop the heads of Hurriyat leaders for calling Kashmir movement a political struggle. Saleem Hashmi, the spokesperson of the outfit, rebuffed Zakir’s statement and termed it as “unacceptable” to the militant outfit. As an immediate reaction, Zakir Musa disassociated himself from Hizb-ul-Mujahideen. He called for Jihad for the establishment of Caliphate and not on the national basis that included union with Pakistan or independent Kashmir.

On June 22, six Lashkar-e-Taiba militants were killed in two different encounters with Indian Army in Kakpora and Arwani. Zakir’s outfit, in one of its video messages, again claimed to have leaked information regarding their position to the Indian Security Forces.

So far, the four main militant groups of Kashmir have supported Hurriyat Leadership in its political struggle against Indian Occupation but disassociation of Zakir is a real challenge to the Kashmiri Freedom Struggle. Taliban-e-Kashmir, a group that has been mentioned in the beginning, has announced its support for Zakir Musa. Little is known about Taliban-e-Kashmir and Zakir himself has expressed his oblivion regarding it. However, he has supported Al-Qaeda and intends to follow its footsteps in establishing Islamic Caliphate in Kashmir.

Read more:Kashmir: An “integral part” of India, the most militarized zone in…

The cracks inside Kashmir’s militancy are widening as the rift between Hizb and Zakir Musa’s outfit over Islam and Kashmir has reached a new stage. After the killing of Hizbul Mujahideen’s new Commander Sabzar Ahmed Bhat, Zakir’s outfit claimed to have leaked information about his presence to the Indian Security Forces. On June 22, six Lashkar-e-Taiba militants were killed in two different encounters with Indian Army in Kakpora and Arwani. Zakir’s outfit, in one of its video messages, again claimed to have leaked information regarding their position to the Indian Security Forces.

Zakir group is enticing young Kashmiris by raising the slogan of ‘Caliphate’ and ‘Jihad Only for Islam’. Zakir and Taliban-e-Kashmir intend to target all those who do not approve their ideology of establishing Islamic Caliphate by negating ‘Nationalism’ in Kashmir.

Hizbul Mujahideen is undoubtedly the most popular militant outfit in Kashmir valley. It is known for its allegiance to the cause of ‘Union with Pakistan’ and just like the other militant organizations, drapes its slain fighters in Pakistani flag as a regular practice. It agrees with Hurriyat’s campaign of ‘Kashmir’s Right to Self-Determination’ and claims to be following the same ‘Islamic Ideology’ that is credited with the creation of Pakistani state. On the other hand, Zakir’s outfit can be aptly dubbed as Pro-Taliban and Anti-Pakistan with an ideology akin to Al-Qaeda and ISIS.

Read more:Kashmir on fire: Has Pakistan really helped the cause?

On the political ground, the rift between militant camps is dividing Kashmiri narrative about freedom struggle. With the emergence of pro-Al-Qaeda Zakir group, Kashmiri public opinion has been divided to some extent. Zakir group is enticing young Kashmiris by raising the slogan of ‘Caliphate’ and ‘Jihad Only for Islam’. Zakir and Taliban-e-Kashmir intend to target all those who do not approve their ideology of establishing Islamic Caliphate by negating ‘Nationalism’ in Kashmir.

For a long time, India’s National Security Advisor Ajit Kumar Doval has been looking for a formula to suppress militancy in Kashmir. Although he has failed time and again, his profile speaks a lot about his experience in counter-insurgency in Kashmir. In 1990, on his visit to Kashmir, Ajit Doval had successfully pushed militants like Mohammad Yusuf Parray to join counter-insurgency forces. Yusuf known as Kuka Parray pioneered a pro-India militant outfit Ikhwan-ul-Muslemoon that targeted top anti-India Kashmiri militants.

What is important to understand is that Zakir has distanced himself from the 70-year old Kashmiri separatist movement and has followed the pattern of Al-Qaeda and ISIS.

Connecting Ajit Doval’s historical record in Kashmir’s counter-insurgency with current scenario in the valley, it can be assumed that the rifts are the result of his so far successful strategies to divide the support base for Kashmiri fighters. Indian Security Forces have exploited this rivalry to their advantage and have successfully taken down some top militants of both Lashkar-e-Taiba and Hizb-ul-Mujahideen.

Read more:Pakistan finally learns what it must do to help Kashmiris

What is important to understand is that Zakir has distanced himself from the 70-year old Kashmiri separatist movement and has followed the pattern of Al-Qaeda and ISIS. Of course, he will not get any support from Pakistan since he has clearly deviated from the path of fighting for Kashmir’s self-determination towards the establishment of a caliphate in Kashmir. Zakir too has urged his supporters not to wave Pakistan flag and has even termed anyone waving Pakistani flag as their ‘enemy’.

This clash of Kashmiri militants at the ideological front will cast very negative impacts upon the freedom movement. One out of many consequences can be the triggering of infighting among the militant groups before they engage the Indian Forces. If this happens, it will result in weakening of Kashmiri resistance, ultimately.

Zakir’s radical Islamic views are a serious challenge to Hurriyat’s narrative and 70-year old Kashmiri Freedom Movement. If he manages to rally huge public support in the valley, the dynamics of Kashmir’s politics will undergo a radical shift that will deliver a setback to Kashmir cause at the international level. As of now, 10 Hizb-ul-Mujahideen militants have broken away from their outfit and joined hands with Zakir. More militants may join Zakir in the coming days making his group one of the significant militant outfits of Kashmir.

Abubakar Farooqi is a student of International Relations at Quaid-i-Azam University, Islamabad. He is a keen observer of International Politics and Current Affairs. He tweets at @AbubakarTweets. The views expressed in this article are the author’s own and do not necessarily reflect Global Village Space’s editorial policy.

Previous articleSparring between PML-N and PTI continues in the ECP
Next articleWestern liberal totalitarianism: friendly and subordinate fascism

22 June 2021
Previous articleSparring between PML-N and PTI continues in the ECP
Next articleWestern liberal totalitarianism: friendly and subordinate fascism

Employment for all: KP to unveil Insaf Rozgar Scheme today

Aftermath of NYT story: US firm on Russia but door open for Putin, says Pompeo

Pakistan values its relations with Japan