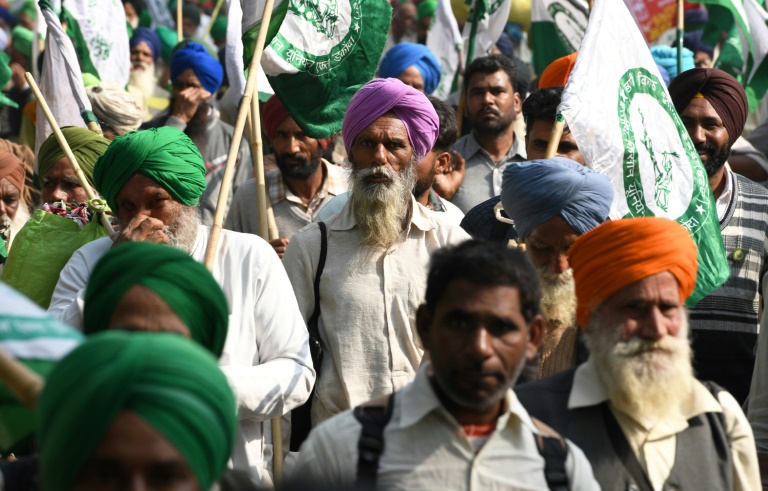 More than 300,000 Indian farmers have killed themselves in the last two decades mainly because of poor irrigation, failed crops and being unable to pay back loans. Farmers from across the country have flooded by train and bus into Delhi since Thursday to mass in the capital city’s Ramlila Grounds before marching to parliament.

Participants marched through central Delhi chanting slogans and holding placards emblazoned with “Down With Modi Government” and “Long Live Farmer Unity” as thousands of riot and armed policemen stood guard.

The western state witnessed some 639 farmer suicides in the first three months of 2018, according to government.

“The farmer crisis has got twice as bad in the last five years,” Sadhu Singh, a farmer from northern Punjab state known as India’s rice bowl, told AFP. “We are losing money on every grain of rice we produce,” he said.

The mass rally is the latest bid by farmer groups to put pressure on the Modi government ahead of the 2019 national elections. The right-wing nationalist leader has promised to double their income by 2022 but farmers say nothing has changed for them.

Organisers said some 80,000 farmers and farm labourers were participating in the two-day agitation that will culminate with a petition to the Indian president.

“We have three main demands. Debt waiver, maximum price for the produce and a special parliament session to discuss the crisis,” Ajit Nawale from Maharastra Kisan Sabha, one of the 200 farmer groups organising the Delhi March, told AFP.

More than 300,000 Indian farmers have killed themselves in the last two decades mainly because of poor irrigation, failed crops and being unable to pay back loans.

Farm distress has been a cause for worry for several decades, but the crisis has come to a head in recent months, with farmers taking to the streets across the country.

Thousands of farmers crippled Mumbai — capital of Maharashtra state — in March. The western state witnessed some 639 farmer suicides in the first three months of 2018, according to government.

Some 50,000 marched in the eastern city of Kolkata on Wednesday. Each year millions of small farmers suffer due to scant irrigation facilities that reduces the yield and leads farmers into a deadly cycle of debt and suicides.

India lacks a robust irrigation infrastructure and most of the country’s farmland relies on annual monsoon rains. Labo Banigo from eastern Orrisa state said he is under huge debts after his crops failed due to back-to-back bad monsoons.

“My farm is a wasteland. There is hardly 10 percent produce,” Banigo told AFP. “Modi promised to double our income but we can’t even feed ourselves.”