Akcent is in Pakistan for his concert where he met DG ISPR and things got hilarious when Akcent mentioned the 'Fantastic Tea' served by Pakistan to Indian Air Force pilot Abhinandan. 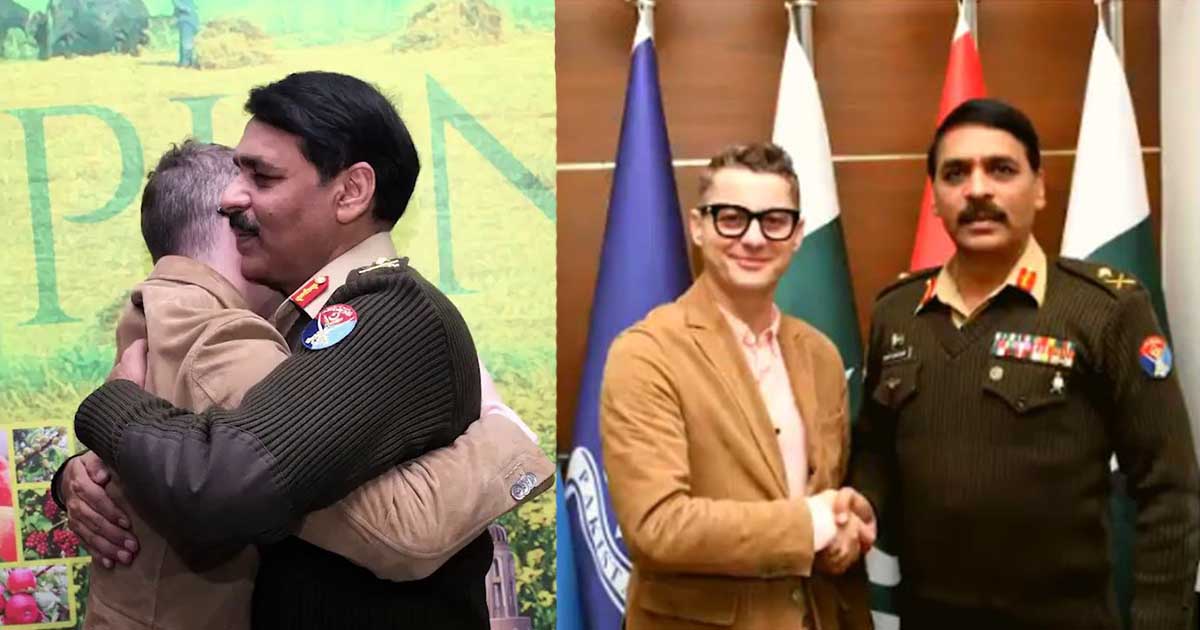 Akcent met DG ISPR on Monday. The moments from the meet up were shared on social media with a hilarious video that not only hailed the friendly relations of Asif Ghafoor with Adrian Sena – band’s lead singer but also took a dig at Wing Commander Abhinandan Varthaman.

Popular Romanian singer, Adrian Sena from pop band Akcent, met DG ISPR Asif Ghafoor on Monday. The singer shared the video of his visit to ISPR Headquarters on his Twitter account, which showed DG ISPR and Adrian Sena warmly embracing each other.

Sena said that he met DG ISPR over a cup of tea describing it ‘fantastic‘ in a short video message; emulating the captured Indian Wing Commander Abhinandan Varthaman from his viral video of praising the tea served to him by Pakistan Army.

Akcent reached Pakistan for a concert in Lahore last week. Last month, the singer announced his visit to Pakistan in a hilarious way, taking a dig at the captured Indian pilot.

Read more: Akcent gets an official invite for Tea Cup from DG ISPR

As announced in his tweets, Akcent was scheduled to perform at Governor House Punjab in association with Voice of Kashmir platform. The singer went on to thank the Prime Minister Imran Khan, Governer Punjab, CM Punjab and Chairman Women Development Task Force Punjab, Ms. Tanzila Imran Khan. He also tagged DG ISPR in his tweets.

DG ISPR reciprocated the gesture by extending an invitation to meet over a cup of tea.

For the Solidarity of Kashmir, Akcent live in concert for the voice of Kashmir.
Thank you Buzdaar Govt. pic.twitter.com/9dsxQDN3A9

His concert in Lahore was marred by controversy when pamphlets associating his concert with a gesture of expressing solidarity with the people of Kashmir by the government of Punjab pinged on social media on Saturday.

The online promotional messages spurred reaction on social media; users had questioned the logic of raising highlighting the catastrophe of Kashmir through a musical concert. The social media backlash forced the government of Punjab to make amendments to the concert.

Read more: Akcent gets an official invite for Tea Cup from DG ISPR

Punjab government including Chief Minister Usman Buzdar and Governor Chaudhry Muhammad Sarwar had rescinded their support. Hence the venue for the concert was shifted from Governor House Punjab to Alhamra Cultural Complex. The government also disapproved of the distribution of the Kashmiri flag among the attendees of the concert. Even the banners of solidarity with Kashmiris were taken down from the government.

Removing all the symbols of expressing solidarity with Kashmir, the concert was turned into a usual music gathering.

Tanzila Imran Khan, the chairperson of Chief Minister’s special Taskforce for Women, said that she contacted the band’s lead vocalist Adrian Sena and made payments from her pocket.

The organizers, however, added that Akcent was disappointed when he was stopped from speaking for Kashmiri people.

No, No, Establishment is Not Packing Imran Government