Disappeared for a day: Ayaz Khan declines report of kidnapping 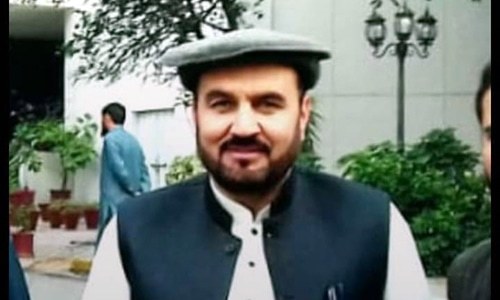 In an interesting development, Deputy Director of Capital Development Authority, Ayaz Khan, who went missing yesterday, has been found safe and sound.

In the early hours of Friday, personal assistant and brother in law of DD CDA Ayaz Khan registered an FIR saying Mr. Khan had left office on Thursday around 2:30 pm and a day had passed but his whereabouts were unknown as his cell phone was powered off.

According to the complaint filed in the Aabpara police station, Khan was in contact with his wife until 8 pm on Thursday and told her he would be back home shortly. But later on both, his numbers were switched off and family lost contact with him. It was also reported that his daughter’s wedding was on Friday, same day family reported him missing fearing he was abducted.

The news of disappearance stirred panic in the social media users as a few weeks ago, SP Tahir Khan Dawar had gone missing in the same manner and later his dead body was found in Afghanistan.

His family members went to his office in Sector G-6 and found his car parked in the building but he was not there either. On Friday, Mr. Khan issued a video statement at night, almost 24 hours after his disappearance, saying he was in Dera Ismael Khan with his relatives, all safe and sound.

He introduced himself in the video as Ayaz Khan, CDA official and addressing the concerned authorities said he was safe and sound with his relatives in DI Khan. HE told he had lost his cell phones due to which he was unable to contact his family in Islamabad. He also requested the general public and Pashtun Community to refrain from spreading rumors of his abduction which were causing trouble to state institutions.

Read more: Kidnapped from Pakistan, murdered in Afghanistan: The curious case of SP…

The news of disappearance stirred panic in the social media users as a few weeks ago, SP Tahir Khan Dawar had gone missing in the same manner and later his dead body was found in Afghanistan.

Although it is relieving that DD Ayaz Khan is safe, the incident has raised many questions. As it was reported that his daughter’s wedding in Islamabad was scheduled on Friday, observers wonder why would he, without telling his family, went to DI Khan especially when he did inform his wife he was heading back home soon. Why would he not contact his family for straight 24 hours to inform them of his whereabouts using other means than his own cell phone he claimed he had lost?

News Desk - 27 July 2021
In the video shared on social media, Afghan soldiers thanked Pakistan Army for hospitality and taking good care of them, adding that they will remember the hospitality of the Pakistan Army.