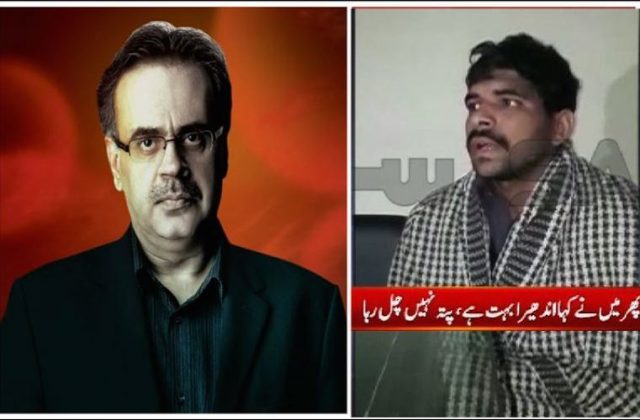 The State Bank of Pakistan (SBP), on Friday, released a report in which they clarified that the accused in Zainab’s murder case has no foreign bank accounts, contradicting Dr. Shahid Massod’s claims. The SBP started an investigation into the foreign accounts matter after they received a request from the Joint Investigation Team (JIT), which was formed to probe into the Zainab murder and rape case.

According to the report, the SBP sent the CNIC of the suspect, Imran Ali, to all commercial banks but found no account being operated by the suspect. The SBP in its report declared that the nation is being misled through a fake list of accounts.

Legal experts believe that Dr. Masood will land into deep trouble for his false news because the Supreme Court took a suo moto notice of the allegations and had already warned Masood that if the allegations were proven wrong, it would result in dire consequences for him.

On Wednesday, senior anchor person Dr. Shahid Masood in his program on channel ‘NewsOne’ alleged that the suspect in Zainab’s murder case held 37 foreign accounts and was part of an international pornography ring. Masood also alleged that the pornographic organization had links with a senior Punjab minister. Chief Minister Punjab Shehbaz Sharif formed a six member JIT to probe into Dr. Shahid’s allegations. The Supreme Court also took a suo moto notice of the case and summoned Dr. Shahid on Thursday, and asked him to provide evidence of his claims.

Shahid Masood received nationwide condemnation for his false news. Media circles criticized him stringently for politicizing such a sensitive issue by linking it with the Punjab government.

Earlier on Friday, Dr. Masood was summoned by the JIT probing Zainab’s murder case but he failed to show up. Punjab government had added two experts from the SBP and Punjab Forensic Science Agency (PFSA) into the JIT after Masood’s allegations but he failed to report to the JIT. According to a tweet by the official Punjab government account, Shahid Masood didn’t show up and his cellphones were switched off when they tried to contact him.

Despite written notice, Dr. Shahid Masood didn’t appear before the JIT formed by Punjab govt to share the proof of information he claimed about bank accounts allegedly held by the accused in Zainab case. His contact numbers are switched OFF and we couldn’t connect .

Yesterday, another senior anchorperson Hamid Mir denied Dr. Shahid Masood’s allegations on his television show ‘Capital Talk’. Mir claimed that there was no evidence to back any of Masood’s claims and all the alleged accounts that he provided to the SC were false. He advised Masood to not waste the time of the government by providing false information through the media.

Man involved in Kasur killings have no bank accounts don’t waste the time of Govt and courts by spreading disinformation on media pic.twitter.com/EnjYnIV40Y

When Dr. Masood was approached by the journalists for his comments after the SBP report, he said that sometimes news is wrong and it is corrected with developments. Masood asked the journalist to not make a big deal out of his claims because false information was reported on media all the time and it was the job of the government to probe into them. He prayed that his news is wrong and Zainab’s murder is not part of a bigger picture.

Shahid Masood received nationwide condemnation for his false news. Media circles criticized him stringently for politicizing such a sensitive issue by linking it with the Punjab government. Legal experts believe that Dr. Masood will land into deep trouble for his false news because the Supreme Court took a suo moto notice of the allegations and had already warned Masood that if the allegations were proven wrong, it would result in dire consequences for him. Some media analysts support Masood, saying that it was the job of a journalist to look into every aspect of a case and highlight any irregularities that they observe.

Imran and Maryam continue their war of words on Twitter