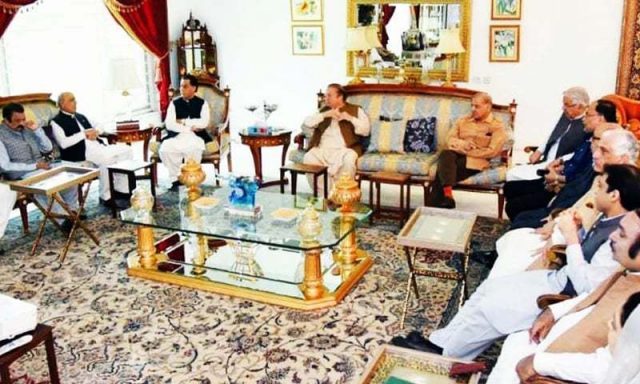 On Monday, the Election Commission of Pakistan (ECP) nullified all the postings and promotions after the issuance of the election program.

The ECP’s order revoked all the postings that have been made after May 31 – which was the last day of the PML-N government. The ECP also issued the election program on the same date, which makes the postings void.

In its notification, the ECP referred to the Sections 5 (4) and 230 (2) (f) of the Elections Act 2017, which prohibits the government from making any postings without the prior approval, in writing, of the ECP.

Read more: Will caretaker government be able to hold free and fare elections?

According to Sections 5 (4), “after the Election Programme has been issued and till the publication of the names of the returned candidates in the official Gazette, any government or authority shall not post or transfer any official appointed or deputed in connection with an election without prior approval in writing of the Commission, including posting or transfer where the decision in respect has not been implemented, and the Commission may itself issue necessary directions to any such government or authority for the posting or transfer of any official”.

Even if the caretaker government decides to transfer certain individuals, it should make sure that fair and just elections are not compromised.

According to 230 (2) (f) and (g), the caretaker government must ensure that it only “transfers public officials unless it is considered expedient” and [that too] after approval of the Commission; and [any] attempt to influence the elections or cause anything which may, in any manner, influence or adversely affect the free and fair elections.”

The upcoming polls are scheduled for July 25 and many bureaucrats which are considered close to the PML-N were posted to important positions, apparently to get the desired results in the general elections.

After the oath-taking ceremony of Justice Nasir ul Malik as caretaker Prime Minister, a major reshuffle in the cabinet took place.

Fawad Hassan Fawad, Secretary to PM and the blue-eyed boy of the PML-N, who also acted as de facto PM under the premiership of Nawaz Sharif, was removed from his position and posted as the director

General Civil Services Academy’s BS-22 officer of Secretariat Group, Sohail Aamir replaced him as the secretary to the PM. Fawad has been under the National Accountability’s radar over corruption charges which he denies.

Fawad’s transfer to Lahore may solve the traveling issues and make it easy for him to appear before the court but the purpose of this slot was not this.

Since he has a close association with the Sharif’s, he was allegedly transferred to control the Punjab based bureaucracy on behest of the Sharif’s.

In other high profile transfers, Syed Abu Ahmed Akif was transferred as the Cabinet Division Secretary and Dr. Kazim Niaz as Additional Secretary in the Prime Minister’s Office. Moreover, Joint Secretary Hassan Baig was posted as the Civil Aviation Authority (CAA) Director General (DG) and Kamran Ali Afzal has been posted to the Finance Division.

The appointment of Dr. Kazim Niaz in particular raised eyebrows because the officer in question had already served as the Joint Secretary in the PM office under Fawad Hasan Fawad.

Previously, Fawad Hassan Fawad’s batch-mate and a BS-22 officer of PAS, Maroof Afzal, who had been appointed as an Establishment Division Secretary, was retained in the position. ECP has taken the timely action to consider these appointments void. These appointments seriously question the impartiality promised under the interim setup.

After coming to government in 2013, in one of his first decision as PM, Nawaz Sharif had appointed Fawad as the Additional Secretary to the Prime Minister.

Bureaucrats from Punjab appear to have a stranglehold on the Prime Minister’s Secretariat in PML-N’s tenure and the situation has apparently remained the same. Only handful of the bureaucrats served in the Federal Capital who belonged to Sindh. Bureaucrats hailing from Punjab have kept almost all the BPA-20 or above posts.

Read more : Will Pakistan be able to become a strong democracy as government completes its tenure?

In 2013, despite the major reshuffle in Punjab’s bureaucracy, six influential secretaries of the PML-N led Punjab government kept their role in the controversial 2013 polls.

It is one of the reasons that the PML-N wanted to ensure early elections. Because it can use its dominant position in the bureaucracy to affect the elections.

It does not matter how honest and professional an official is, a level playing field should be provided to all the political parties and the old blessed [lords] should be replaced to ensure fair and free elections.