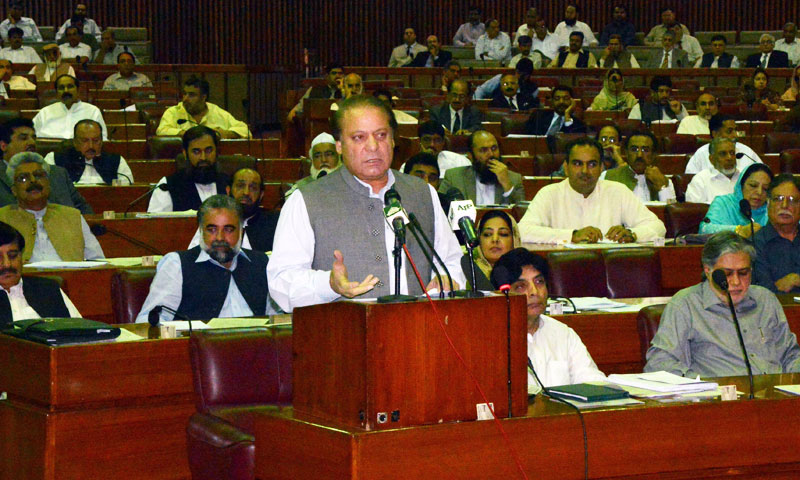 In the post-indictment interview, Maryam Nawaz stated that ex-PM Nawaz Sharif is coming back to face the proceedings in accountability court. The significance of Sharif’s non-appearance in the court and now, all of sudden, possibly an abrupt decision to come back challenges the intellect of a rational mind. But, the decision to face the court after the indictment may look perplexing, but insight into details reflect a master plan to cater the alleged meddling of the corruption case with intensity.

House of Nawaz apparently seems to have crafted a very well devised & informed strategy to tackle the ongoing crises with zeal. In fact, in the first phase, it decided to play a delaying tactic which is evident from the number of no-shows by the family.

The House of Nawaz is treating the current proceedings in a way that when they eventually take the case into final high court appeal, the intensity and pressure created at the moment will ease out

The early appearances of the family in the court were to leverage the political ground. Though, Nawaz did not appear on 19th September but returned much to the media frenzy on 26th September and 2nd October. Despite the deployment of rangers, amid the rowdyism of the PML-N lawyers, the court was unable to put the indictment on Nawaz. This ruckus and mayhem were to dismantle the regular court proceedings and delay the hearings for as long as possible. So, the stage was set by adopting the intimidating behavior and message was sent to move slowly, otherwise, face the music.

Read more: How will Sharif save his political career after NAB indictment?

Expecting the impact of pressure through rowdyism, Nawaz decided to miss the hearings on 9th and 13th October sighting the wife’s ill health. He pleaded not guilty through the Khawaja Harris’s junior lawyer-Zafir Khan, (who acted as a pleader). It appears that this drama was staged to create pressure on the honorable judge, gather sympathy among the supports by portraying themselves as victims of an establishment.

Now, after the indictment, the situation has turn on its head, as Maryam stated that her father is coming to face the trial, sighting the improvement in her mother’s condition, which is mindboggling as it is completely opposite stance to her pervious rhetoric.

The agitation and agony together brought expected comments from Maryam. The desperation of the family from the system is understandable given the leverage of the past, culminating into distant reality.

The fact of the matter is that Nawaz is trying to emulate Benazir’s delaying tactics. He is more interest in the waiting game. Ex-PM wants a situation where the court, prosecution or the political environment is acquiescent to their needs and wants

Maryam Nawaz looked visibly disturbed, and some of the scenes post indictment showed her agony. Her choice of words depicted the ongoing tussle and expected extreme scenario for the house of Nawaz. What disconcerted her the most and made her life difficult over the course of JIT investigation and subsequent trial in accountability court has been the NAB’s ‘collected evidence.’

Those vary boxes—labeled as evidence have been the key to expose the reality of the family. With the reports suggesting that NAB officials have flown to London to investigate further the cases cannot put the decisiveness and bitter truth of the 10-volume of JIT.

Under current circumstances, where the large part of the media, opposition parties, establishment and general public share a sentiment of resentment against the ex-PM, Sharifs are deciding to file an appeal in the high court. The decision is to delay the court proceedings. As of now, tense political circumstances cannot allow them a breather, the house of Nawaz wants to buy some time.

The apex court restricted that NAB must have to perform under the supervision of appointed Supreme Court Judge.

Asma Jahangir, three former and present SCBA presidents have questioned the decision of Apex Court to appoint a Supreme Court judge to supervise the reference in NAB. Now, again, one must understand that it was indispensable to do so as elaborated in the judgment. In normal circumstances, the investigation of alleged corruption should have been conducted by the National Accountability Bureau (NAB) but NAB’s chairman appears to be indifferent, and his position is compromised therefore unwillingly, the court had to constitute a joint investigation team (JIT).

Pakistan’s legal system is extremely flexible and favors the defense immensely, resulting in only 5-6% conviction charges in murder cases and even less than 1% of the white-collar crime and corruption cases

Why delay the proceedings? House of Nawaz Sharif had witnessed the same tactics previously adopted by the late Benazir Bhutto in the corruption charges against her and Asif Ali Zardari in 1998.  The charges brought forward against the Bhutto were very well researched and substantial evidence was collected by the Senator Saif-ur-Rehman. He hired a reputed international investigative firm to dig out the money trail and corruption in infamous Swiss case. It was likely that the pair would face a jail term, very much akin to the situation in the case of Nawaz (if proven guilty, he faces ten years in jail).

But, unfortunately for Pakistan and luckily for the Bhutto family, Nawaz Sharif government was overthrown by the General Pervez Musharraf in October 1999. The general never had the same venom against the Bhutto clan which gave them relief in this high profile and well-crafted corruption case.

Read more: Why are NAB references against Sharif family important?

Benazir had subsequently left the country in a self-imposed exile. This piece of history is a critical case study for these willing to understand the Pakistan’s judicial system. Pakistan’s legal system is extremely flexible and favors the defense immensely, resulting in only 5-6% conviction charges in murder cases and even less than 1% of the white-collar crime and corruption cases.

In Pakistan’s judicial system, whether you are politically influential or not; it is challenging to proceed as defense seek time, delay prosecution, and the lawyer remain absent for miscellaneous reasons. Benazir Bhutto and Asif Ali Zardari approximately sought one hundred and forty-five adjournments in their corruption case.

The fact of the matter is that Nawaz is trying to emulate Benazir’s delaying tactics. He is more interested in the waiting game. Ex-PM wants a situation where the court, prosecution or the political environment is acquiescent to their needs and wants. The question is why did Zardari get an acquittal in his NAB cases? Why does he walk as a free man today, despite having a very dubious and crafty person reflecting his true self? Nawaz wants a similar respite, and the house of Nawaz and his close aides are building a case which appears as if they are targeted at someone’s behest, and prosecution is taking place in undue haste. If this is the case then why did the apex court appoint the supervisory judge to conclude the trial within six months?

Why delay the proceedings? House of Nawaz Sharif government had witnessed the same tactics previously adopted by the late Benazir Bhutto in the corruption charges against her and Asif Ali Zardari in 1998

Ex-PM filed the four applications in the accountability court on 19th October. It was requested to handover the all-important volume-10 and detailed transcripts of the witnesses used against the family. The family also put forward the application in the Supreme Court to converge the four-references into the one reference.  It asked the accountability court to wait for the decision by the apex court and indictment should be postponed. But, the Supreme Court had purposely directed NAB to file three references against Nawaz and his children.  It pointed that crimes had taken place in three different countries-KSA, UAE, and the UK. The nature of crimes, time periods, and the people involved in the process varied resulting in the formation of multiple references against the culprit.

The House of Nawaz is treating the current proceedings in a way that when they eventually take the case into final high court appeal, the intensity and pressure created at the moment will ease out. They wish to drag the case until Senate elections and ideally after the general elections of 2018, to defuse the pressure created by the electronic and print media and opposition parties or maybe through a change in the unpredictable landscape of Pakistani politics.

Under current circumstances, where the large part of the media, opposition parties, establishment and general public share a sentiment of resentment against the ex-PM, they are deciding to appeal in the high court

House of Nawaz wants to replicate Bhutto family’s acquittal. The wish list includes the retirement of the notable members of the judiciary, NAB and other relevant stakeholders. The creation of cases against Imran Khan to diffuse the pressure and making changes in the law to reduce the ages of the judges are all part of the ‘rules of the battle’ to win at any cost.

One of the trump-card is to wait until the Senate elections. The win in Senate elections could guarantee a more potent power weapon to terrorize the judiciary, NAB, opposition against the agitation and to retake control of the party. The way Nawaz sent a strong message by electing himself as a party head by the alteration in law. Similarly, by winning Senate, Nawaz again wants to ensure that rebellion forces conspiring against him go to rest.

Finally, by securing the services of the lobbyist in the Washington, Nawaz again wants to create a similar pressure which Benazir put on Musharraf through Condoleezza Rice which facilitated the NRO. House of Nawaz wishes to wait for the right moment to deliver the final soccer punch. Hoping to secure a settlement which favors Maryam’s future political prospects is the least what egoistic Nawaz desires.