Eid-ul-Adha 2017: Glimpses from around the world 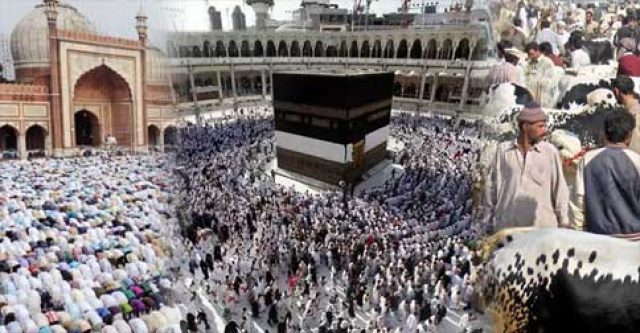 Eid-ul-Adha, or the Festival of Sacrifice, is the second most revered festival in the Muslim world, which is celebrated to mark the end of the “Annual Pilgrimage” or “Hajj” each year. Muslims from around the world, perform their religious obligation to sacrifice animals in the way of God (Allah).

Millions of Muslims around the world are celebrating the Eid al-Adha holiday as some two million pilgrims carry out the final rites of the annual Hajj in Saudi Arabia.

Hundreds of thousands of Muslim pilgrims on Friday made their way towards a massive multi-story complex in Mina after dawn to cast pebbles at three large columns.

A Muslim pilgrim collecting stones to perform the last rites of Hajj on 10th of Zilhaj.

Traditionally it’s a four-day festival, which is celebrated from the 10th to 13th days of the Islamic month of Dhul Hijja. Muslims around the world celebrate Eid al-Adha with great devotion and enthusiasm.

For people in Saudi Arabia, it is a 16-day public holiday beginning on Thursday, September 1. Other places like Ghana, Turkey, and the Philippines too have public holidays for this festival.

In India, it is a 4-day festival with people celebrating with prayers, greetings, and gifts. Mosques like Jama Masjid in Delhi, host massive prayer sessions attended by a large number of devotees.

Women in Hebron, Palestine, are preparing traditional sweets filled with nuts and dates to sell in the bakeries and confectioneries ahead of Eid-ul-Adha 2017.

People are busy shopping in the Hamidiya Market in Damascus.

Eid ul Azha is celebrated in Malaysia by the name of Hari Raya Haji. There is a single day of public holiday as opposed to a three-day long festivity like in Pakistan. Family reunions are an especially cherished aspect of this Eid among Muslim Malaysians.

Filipino Muslims offers Eid-ul-Adha prayers in congregation in a park in Manila.

A Syrian Man read Quran while a visit to the grave of the relative on the first day of Eid-ul-Adha.

Eid al-Kabir (literally translated as ‘Big Holiday’) is celebrated as the most important Muslim festival in Morocco. Since Moroccan cuisine is heavily focused on meat based dishes, the variety of foods prepared especially for this festival is tremendous. At the start of the day, locals enjoy a breakfast dish of cracked wheat prepared with condensed milk and butter and sweetened with honey. But expect the table to be filled with 7alwa (cakes/biscuits) as well.

While trending on Twitter, greetings, and wishes are heavily floating on social media from throughout the world.

A very happy #Eid to Muslims worldwide! Our wishes for a joyful holiday. @StateDept pic.twitter.com/dDAk3r0rDV

Palestinian Muslims and Christians together are celebrating and welcoming #Eid Al-Adha in Ramallah city . United we stand pic.twitter.com/IPsYYNK3Cv

To everyone celebrating across our city and around the world: Eid Mubarak! #EidMubarak pic.twitter.com/q0Zxm56XHy

If we all pointed the finger at ourselves the way we point it at others, the world would be a better place. Eid Mubarak. Love & peace pic.twitter.com/hX79oAvWZ9

Where the Muslim world is enjoying and busy in preparing for celebrations, it is an utmost duty to remember the refugees living under crisis today.

Eid-ul-Adha Mubarak to all the Muslims!