Eid-ul-Fitr celebrations across the globe! 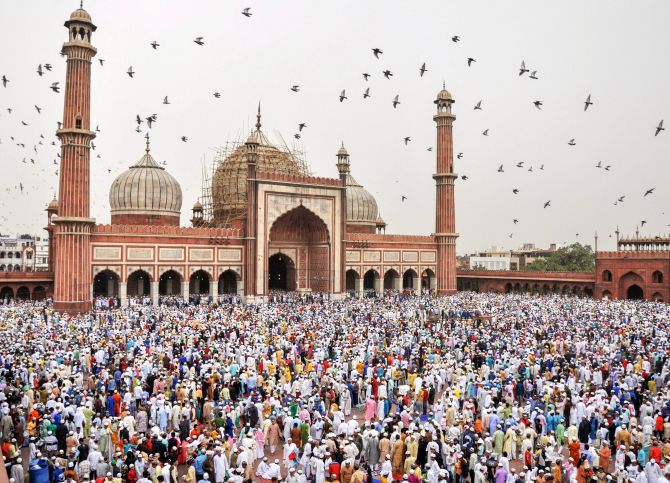 Eid-ul-Fitr is an auspicious and the most awaited celebration of the year in the Muslim world. From the Moroccan deserts to the plains of Central Asia to the Alps in Switzerland, Muslims in each part of the world celebrates the event unanimously at the beginning of the 10th month of the Islamic Calendar.

Eid-ul-Fitr, which is an Arabic word, literally means the blessed celebration. This three-day celebration is a gift for the Muslims for their month-long religious obligatory act of fasting in the 9th month of Ramadhan.

The Muslims in every part of the world celebrate the event wholeheartedly. However, there are few common traditions that are shared by Muslims irrespective of their culture, language, race, color and ethnicity.

Those shared traditions are offering mass congregational Eid prayer at the start of the day, exchange of gifts and sweets, wearing new clothes, greeting fellow Muslims, enjoying meals together, spending the day with the extended family and giving charity.

Read more: Eid: How one of the holiest gifts of God divides Pakistan!

Unlike in Western Countries, Eid in the Muslim countries of the East is celebrated to its fullest where Eid-ul-Fitr is given the status of a three-day national event.

However, the most amazing thing is to acknowledge the fact that in spite of following few shared traditions throughout the globe, at the same time the colors of the celebration tends to speak different variations in terms of the native culture and traditions of each country.

In Pakistan the day starts with, offering Eid prayers in the mosque. The day is followed by sharing gifts, and meals with family and friends. In most cases, those who have large extended families organize grand lunch and dinner. Sheer Khurma, which is made up of milk and rice, is the most widely consumed sweet on Eid in the sub-continent regions of India, Pakistan and Bangladesh.

People belonging to these nationalities make this sweet dish to mark their celebrations no matter in which part of the world they are living in. Biryani, a rice dish, and other meat items such Chicken Karahi and BBQ stuff also dominate the main course of the meal on Eid day.

The Turks on the Eid day visit the cemeteries and flower the graves of their loved ones. The flower stalls are set around the cemeteries for these three days of Eid. Joyous children go from door to door in their neighborhood to wish Bayram in return they are gifted with sweets such as Baklava and other traditional Turkish delights.

In evening, community theater shows are also organized for the families by the municipality of the area. Leisure activities such as the performance of Mehter (a Janissary Band established at the time of the Ottoman Empire) are organized on the streets of Turkey.

Read more: 4 ways to remain active, and productive, in Ramadan

Lebaran or Idul Fitri are the two popular names given to the festival in Indonesia; where the world’s 13% percent of Muslim population resides.

The most notable tradition of the culture is to visit the house of relatives and friends to ask for forgiveness for the wrong doings on in the past year.

This wish in the phrase “Mohon Maaf Lahir Batin” which means “forgive me from the bottom of my heart/soul for my wrongdoings in the past year.”

However, the Eid greetings are expressed in the phrase “Minal Aidin Wal Fa Idzin.”

Though, food is central to every culture’s celebrations, ketupat; a rich made dumpling packed inside a diamond shaped container of woven palm leaf pouch.

Africa is a continent alone which has so many different flavors of local traditions and culture to celebrate Eid as compared to the whole Muslim world.

In Tunisia for example, special biscuits are prepared to distribute to relatives and friends on the day, including several kinds of “ka’ak” and Baklava. There may be dancing and music during the daylight hours, but the feasting lasts throughout the day.

In Egypt, the family gatherings are considered must on the first day of Eid so that people may go out for other recreational activities such theaters, cinemas, park and cruise on the Nile on the second day.

In the family gatherings, Egyptian food like Fata, but Kahk, which are cookies with nut fillings and covered with powdered sugar are prepared at home by females.

In Somalia following the same traditions, large feasts are organized in the banquets where halva or Xalwo a sweet dish is served.

In South Africa, however, Muslims gather at the Green Point in Cape Town to celebrate the festival, where exchanges of food such as cakes, biscuits, pies, samosas and tarts are shared and served to visitors.

The USA accounts for only 1% of Muslim population. No official holidays are given but Muslims, however, can take a day off from schools and work if it falls on weekdays.

People belonging to different nationalities organize large community gatherings and feasts in their localities where people mingle up, wear new clothes, women apply henna on hands along with sharing their traditional dishes.

Previous articleThe modern Eid; how and why it changed.
Next articlePerks of Eid: Discount on consumer products!

25 September 2021
Previous articleThe modern Eid; how and why it changed.
Next articlePerks of Eid: Discount on consumer products!

US fails to bring Turkey under pressure- Russian Missiles delivered