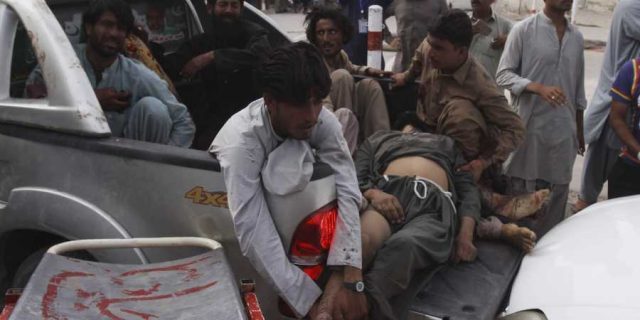 The death toll from a suicide bombing that hit southwestern Pakistan on Friday has risen to 149, making it the second most lethal attack in the country’s history, officials said Sunday as top politicians joined a day of national mourning.

Raisani’s body was then driven from Quetta to his ancestral home of Kanak, near where he was killed, for the second set of funeral prayers tightly guarded by paramilitary forces.

The attack claimed by the Islamic State group was the latest in a series of deadly blasts at various election campaign events ahead of national polls on July 25. A suicide bomber detonated as local politician Siraj Raisani spoke to a crowd of supporters in southwestern Mastung district on Friday. Raisani was among those killed.

Read more: A matter of growing insecurities: Terror during elections

The latest toll topped that of a 2007 bomb attack in Karachi targeting former premier Benazir Bhutto, which killed 139 people. The country’s worst-ever attack was an assault on a school in the northwestern city of Peshawar in 2014 that left more than 150 people dead, many of them children.

Authorities will publish adverts in local newspapers on Monday seeking information on bodies taken home directly after the latest attack and buried without informing the police, Lashari said, meaning the official toll could rise again.

“We are trying our best to ascertain the exact date of those killed in the blast,” he told AFP. Saeed Jamal, another senior government official, confirmed the latest death toll and number wounded in the attack.

“It was a huge tragedy,” Khan told a press conference, calling for the military, police and civilian government to prevent further attacks.

Friday’s blast came hours after another bomb killed at least four people at a campaign rally in Bannu in the country’s northwest. A third bomb killed 22 people at another rally in Peshawar on Tuesday.

A suicide bomber detonated as local politician Siraj Raisani spoke to a crowd of supporters in southwestern Mastung district on Friday. Raisani was among those killed.

The visits took place hours after funeral prayers were offered for Raisani in a ceremony attended by Pakistan’s powerful military chief General Qamar Javed Bajwa. Raisani’s body was then driven from Quetta to his ancestral home of Kanak, near where he was killed, for the second set of funeral prayers tightly guarded by paramilitary forces.

He was laid to rest beside the grave of his son Akmal, who was killed in a grenade attack in 2011. Raisani’s father and other male relatives, killed in tribal warfare, are also all buried there.

One of the mourners in Kanak, Ali Ahmad, said: “no house in the area” had been unaffected by the attack.

“Every eye is tearful,” he told AFP. Two of his nephews had attended the rally in order to taste the cold sweet syrup that political parties often serve at such events, he said. They were both killed.

Mohammad Shoaib, who had attended the rally but escaped with just minor injuries, said the moments after the blast was “terrible”. “Everybody there, like me, was helpless — all they could do was wail or cry”, he said through tears.