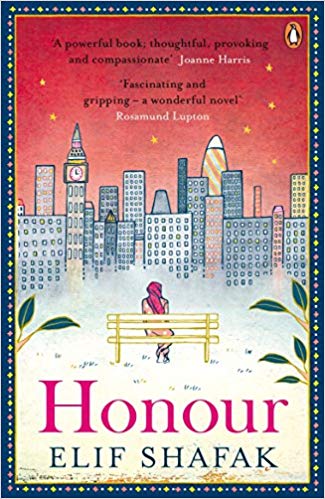 I still remember today, the night when my mother and her sister sat on the sofa whispering about a distant uncle living in London, who killed his daughter. She had apparently fallen in love with a non-Pakistani boy. All memories of this event came flooding back to me as I read this heartbreaking and powerful book, which holds you spellbound till the end.

Honour is about two Turkish twin sisters Pembe who marries Adem Toprak and moves to London and Jamila who stays in their village and practices as the ‘Virgin’ Midwife as they call her. The book goes through the trials faced by the Topraks, as a new immigrant family settling in the UK. The conflicts they face while adopting parts of the UK culture while trying to retain their identity as Turks.  The story relays the strong unsaid social codes, where men are the breadwinners and are meant to uphold the honor of their families and gain respect from their neighbours. While, women on the one hand are the passive recipients of these norms, but on the other hand, are themselves the silent yet rigorous enforcers of these social norms.

“Not everyone would understand this, but their honour was all that some men had in this world.”

As the story unfolds, it becomes apparent that Adem, who is not fulfilling his end of the bargain by not earning enough, ends up running away from his family into the arms of an exotic dancer who makes him feel good; ironically, because she thinks he is richer than he is. Once Adem leaves the house, his role is thrust upon his eldest son, Iskender, who Pembe calls her ‘Sultan’. Iskander is a teenager who is himself in throes of trying to understand what it means to be a man. He is conflicted by his role as the eldest son and upholder of the Turkish code of honor and the demands of a teenager’s life in the UK. He discovers that his English girlfriend is pregnant at the same time as he is informed that his mother is seeing another man. His decision of what he needs to do is made for him when his uncle Tariq tells him that “Not everyone would understand this, but their honour was all that some men had in this world.” There is an intriguing twist in the tale as we discover in the end of the book, but it doesn’t leaves you feeling much better.

Elif Shafak is a Turkish writer who is very popular in Turkey and across the world. She has won numerous awards for her novels. Her first novel, Pinhan (The Mystic) was awarded the “Rumi Prize” in 1998, which is given to the best work in mystical literature in Turkey. She writes both in Turkish and English.

To order a copy from Amazon

How rogue lawyers are destroying courts?

Pakistan’s new ambassador to US?