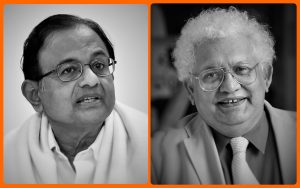 Desai argues that the Modi has struck a master move through the move to demonetize high currency notes as cash hoards circulating sustain clandestine activities. On the other hand P. Chidambaram, former Congress Finance Minister, argues that there is nothing new about replacing higher currency for lower currency notes.

Modi has by fiat made hoards of cash valueless

The master stroke that Narendra Modi struck on the night of the American elections is that, by fiat, he made hoards of cash valueless.

Money is a means of payment. It can also be a store of value, but its value declines with time since it earns zero interest rate if hoarded; inflation erodes it further.

Radical means going to the roots. The black money problem has been troubling India since before Independence, when excess war-time profits were hoarded by a few in cash mountains. In a largely poor society, cash payments are the norm. The thin veneer of modern tax laws and revenue services further encouraged hoarding of cash. Socialists of all parties, whose economics is theoretical rather than practical, compounded the problem by introducing punitive rates of taxation, making hoarding more profitable.

The Indian economy has, as a result, become enmeshed in the black economy. Not all kala dhan is the same. Sending money abroad illegally to a foreign bank is criminal, but does not affect the daily running of the Indian economy. Routine income tax evasion is also small beer. The problem is with hoards of cash acquired in a variety of businesses. It is this money which not only circulates in clandestine activities — drugs, prostitution, gambling — but also enters legitimate sectors such as real estate, jewellery and luxury consumption. This sort of black cash has become not just a part of the economy but a dynamic part at that. Electoral politics has also been shaped by these hoards of money.

ATM van at AIIMS gate helps people avoid rush at banks
Money is a means of payment. It can also be a store of value, but its value declines with time since it earns zero interest rate if hoarded; inflation erodes it further. The advantage is of the tax evaded and the chance to invest in other ‘black’ activities. Yet money is just a piece of paper. Unlike gold, it has no intrinsic value. Its value depends on its legal acceptability.

The master stroke that Narendra Modi struck on the night of the American elections is that, by fiat, he made hoards of cash valueless. The government had tried amnesty and it yielded Rs 66,000 crore. The money abroad is being brought back. But the cancer is money at home. By demonetising the old currency, the value of those vast hoards of cash has been wiped out. It is the biggest redistributive policy move of the past 70 years. We will never know the full extent of the impoverishment of the cash hoarders, unless opposition parties march in support of the new poor! But we will see its impact on the slowdown in luxury consumption, jewellery and real estate sectors, where this money was being openly converted into real wealth.

The trouble is that black cash looks just like white cash. In striking at the big hoarders, surprise is of the essence. The sudden demonetising of the old currency and changing over to new currency causes teething problems. But these will last no more than a week or two. There will be hardship to some, but then as Lenin said, “You can’t make a revolution without breaking heads….”

In this revolution, there is no need to break heads, but important not to lose them. What is of essence is to stop the regeneration of the same cycle of black money accumulation. The answer lies in what has been done. The hoarders now know that any time the government wishes, it can demonetise the hoards of currency. This threat must be kept alive, making hoarding not just illegal but unprofitable.

Modi has shown that he is a risk taker where it matters.[/vc_wp_text]

Across the aisle: Old notes for new is not game-changer

Money, inherently, has no colour. In most countries, specified money transactions are taxed. This gives rise to two classes of money — money that is not taxed and money that is taxed. If money that is liable to be taxed is not offered to tax or otherwise escapes taxation, that money is usually referred to as unaccounted money or ‘black money’.

The best known tax on money is income tax. It is regarded as a progressive tax — more the income, more the tax. Not many are happy to pay income tax. They view income-tax rates as excessive and income-tax as confiscatory.

The tax evader is regarded as a villain. Sometimes, wrong persons are dubbed as villains. If, for policy reasons, a significant part of the incomes earned by the people is not taxed, those incomes are perfectly legal and legitimate. The best example is India where agricultural income is not taxed but is legitimate and legal income.

As long as taxable income and non-taxable income co-exist, when money passes from one person to another, it may change colour. Consider money passing from a farmer to a shopkeeper to a doctor. Depending upon who is a taxable entity, it may turn from white to black and to white again.

Besides, as any economist will point out, black money is not entirely ‘stock’. Mostly, it is a ‘flow’. In the old days, perhaps unaccounted money was stored as cash — the proverbial ‘under the mattress’. Nowadays, unaccounted money is mostly hidden in real estate, buildings, bullion, jewellery and shares/securities.

A few days ago, the government announced that currency notes of the denomination of Rs 500 and Rs 1,000 had been ‘demonetised’. ‘Demonetisation’ has a special meaning. It means that the currency note of that denomination will, henceforth, be a scrap of paper! Nothing of that kind happened.

The government’s notification of November 8, 2016, withdrew the “legal tender status” from the notes of the two denominations but made it clear that those “holding these notes can tender them at any office of the Reserve Bank or any bank branch and obtain value thereof by credit to their accounts”. So, we can be clear on one thing, there was no demonetisation, and the government’s spokespersons would be well advised to avoid that word. The correct way to describe the decision is ‘Old notes for new’!

Both the government and the RBI have declared three objectives for the ‘Old notes for new’ decision. Firstly, to “tackle counterfeiting Indian banknotes”. This is nothing new, the RBI does this from time to time, new series notes are issued and the old series notes are impounded over a period of time and destroyed.

The second objective is to “curb funding of terrorism through fake notes”. This is really a part of the first objective.

The third objective is to “nullify black money hoarded in cash”. The assumption is that unaccounted money is stored in Rs 500 and Rs 1,000 notes and therefore they must be “nullified”. At the end of March 2016, there were 1,570 crore

Rs 500 notes and 632 crore Rs 1,000 notes in circulation, representing 85 per cent, by value, of all notes in circulation. Step one: pull them out by forcing people to deposit them in banks within a 51-day period ending on December 30. Step two: if it is true demonetisation, destroy the notes, which for obvious reasons the government dare not do — unless it wanted a revolution!

There are many uncertainties and unknowns in the government’s plan:

1. How did the government come to the conclusion that the Rs 500 note was, in the present day, a high denomination note?

2. Was the government prepared to handle the demand for new notes? The first few days have been utterly chaotic and people have been put through a lot of hardship.

3. What will be the cost of replacing the old notes with new notes, including the cost of printing the new notes? My estimate is Rs 15,000 to Rs 20,000 crore. Was the cost worth the effort?

4. The present cash to GDP ratio is 12 per cent. Will it come down to the world average of about 4 per cent?

5. The value of the high denomination notes currently in circulation is about 15 lakh crore rupees. Will that value come down significantly?

6. Will gold imports surge indicating that unaccounted income/wealth will seek refuge in bullion and gold jewellery?

7. How will the government’s plan stop the generation of fresh black money?

8. And the most puzzling aspect: how will the government’s objectives be met if new and higher denomination series of notes (Rs 2,000) are introduced?

I have been derisively referred to as a columnist. Will the bloggers, if not the ministers, please answer the questions of this columnist?