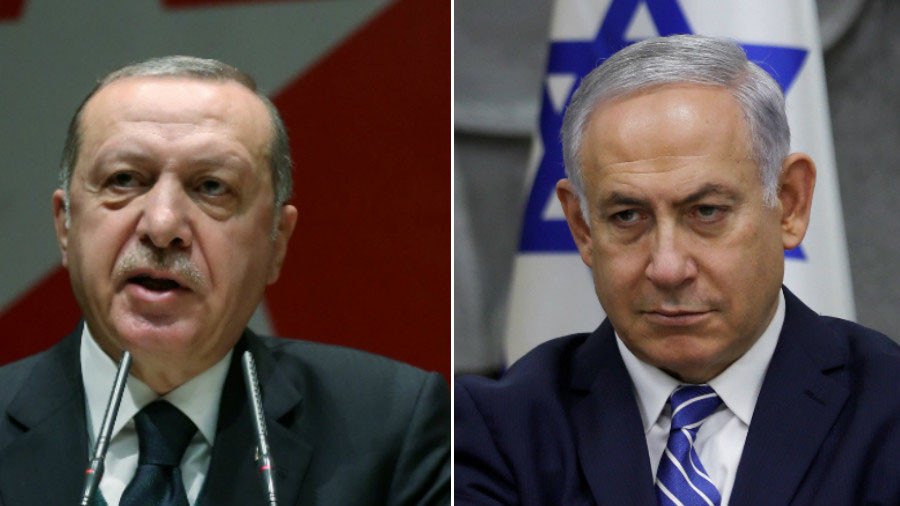 The personal rivalry between Turkish President Erdogan and “Israeli” “Prime Minister” Netanyahu has been simmering for some time, especially since they last came to rhetorical blows with one another following the Gaza flotilla raid in 2010, and it finally boiled over following Trump’s controversial decision to recognize Jerusalem as “Israel’s” “capital”.

Erdogan said that “Israel” is a “terrorist state” that “kills children”, while Netanyahu fired back by accusing the Turkish President of killing his own Kurdish citizens, jailing journalists, and helping Iran evade international sanctions. Each side is trying to gain soft power points at the expense of the other.

To wrap it all up, the takeaway is that Erdogan and Netanyahu are using their personal row with one another over Jerusalem to improve their soft power standing within their own civilizational blocs.

Turkey wants to position itself as the leader of the international Muslim community, or “Ummah”, drawing on its Ottoman-era past in this regard and recently driven forward by its vocal support for the Palestinian cause. “Israel”, on the other hand, wants to show the West that it won’t hold back in its criticism of Erdogan, with whom the US and EU have very delicate and shaky relations nowadays that thus require a certain degree of diplomatic sensitivity in handling, but to the disappointment of their citizens who would rather that their leaders take a harder line towards Turkey.

Read more: There’s more to the Saudi-“Israeli” alliance than meets the eye

In a sense then, one can say that Turkey and Israel aspire to lead different civilizational blocs, and that each of them are therefore using the Palestinian issue to promote their respective agendas. Turkey is the current chairman of the Organization of Islamic Cooperation (OIC), and it’s executing this role at just the right time too because it could serve as a “balanced” middle ground mediator in bringing together the competing camps involved in the Iranian-Saudi Cold War. As for “Israel”, its powerful international lobbying groups have already proven more than capable of presenting Tel Aviv as a friendly “frontline state” in the Mideast “worthy” of Western support and sympathy.

Turkey wants to position itself as the leader of the international Muslim community, or “Ummah”, drawing on its Ottoman-era past in this regard and recently driven forward by its vocal.

Each of these two competing actors have their disadvantages, though, namely in that they’re both exceptionally polarizing within their respective civilizational blocs and especially outside of it. Many Westerners fear Erdogan because they see him as an unpredictable “strongman” who’s Islamifying his constitutionally secular state and trying to become a 21st-century Sultan, the latter point of which concerns some Arabs who are afraid that he’ll try to reconquer their countries in a neo-imperialist form like what happened in the aftermath of the theater-wide “Arab Spring” Color Revolutions. When it comes to “Israel”, most Muslims don’t trust it because of its contentious modern-day creation and decades-long application of the regional divide-and-rule stratagem of the Yinon Plan, while there are an ever-growing number of Westerners who strongly oppose its treatment of the Palestinians.

Read more: Writing “Israel” In Quotation Marks Is A Peaceful Form Of Pro-Semitic…

To wrap it all up, the takeaway is that Erdogan and Netanyahu are using their personal row with one another over Jerusalem to improve their soft power standing within their own civilizational blocs, but that their intended audiences are eventually going to ask them to “walk the walk” one way or another after “talking so much talk” if they want to be seen as credible.

PIA, Railways once the top notch institutions reduced to burden the nation

US vows to force N.Korea back to nuclear talks