Esra Bilgic-Halime Sultan returned the love from Pakistan despite being subjected moral policing by a cross-section of Pakistani social media users who slammed her for western dressing. She is excited to meet her fans in Pakistan. She expressed her wish during the exchange of comments with a Pakistani fan on Instagram.

Esra Bilgic-Turkish actress popular for her character of Halime Sultan in the Turkish serial, Dirilis Ertugrul says she is excited to meet her fans in Pakistan. She expressed her wish during the exchange of comments with a Pakistani fan on Instagram.

In her comment, she thanked the love and appreciation she is receiving in Pakistan. “I would like to say thank you with all my heart for your precious compliments. Your support makes me happy.” To another comment, she said, “lots of love from me to Pakistan.” 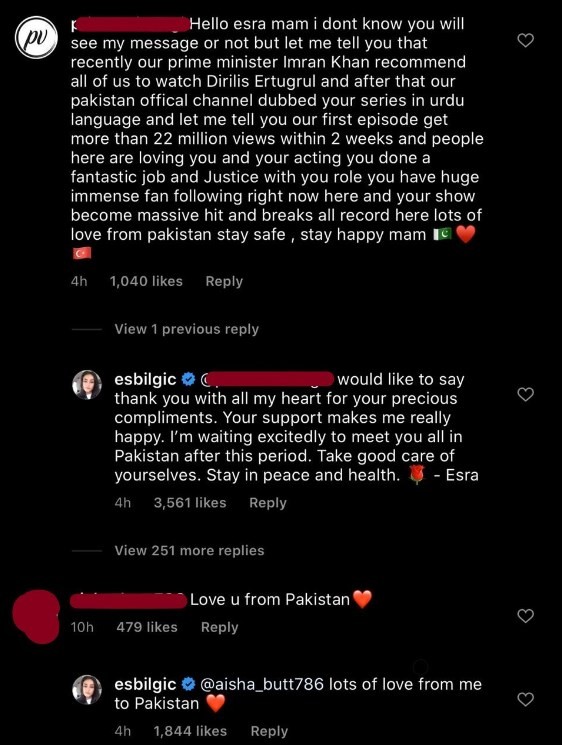 A Pakistani fan informed how the serial Dirilis Ertugrul has smashed popularity records in Pakistan. Pakistan’s state-owned television, PTV is broadcasting the serial in Urdu dubbing this Ramzan upon the request of PM Imran Khan.

Also, another Dirilis Ertugrul actor Cavit Çetin Güner who played Dogan Alp in the serial in his latest interview said he is also excited to visit Pakistan and meet his fans. He said Pakistan is like his ‘second home’ and he has learned this from his parents. Like Esra Bilgic, he also expressed his wish to visit Pakistan soon. He said he is receiving immense love and appreciation from Pakistan. In the end, he asked his Pakistani fans to continue watching Dirilis Ertugrul.

However, Esra Bilgic-Halime Sultan returned the love from Pakistan despite being subjected to moral policing by a cross-section of Pakistani social media users who slammed her for western dressing.

Pakistani fans- inspired by the exquisite representation of Muslim characters played by these actors on screen- rushed to their social media accounts. However, the western lifestyle of Turkish actor disappointed Pakistani fans.

Pakistani fans swarmed the Instagram accounts of Esra Bilgic with rude and unpleasant comments. They blasted her for not emulating the traditional Halime Sultan in real life. They commented she played the role of a noble and modest woman in the serial. Then she should emulate that character in real life too. Moreover, some even asked the Turkish government to take action against Esra Bilgic for disrespecting the ‘Halime Sultan’.

Perhaps, fans expected Esra Bilgic to be living the same traditional life she played in Dirilis Ertgurul. The disgruntled fans went on to say that they have started hating her after seeing her pictures.

Despite, unpleasant comments from a few Pakistanis, she has a growing fan base in Pakistan. She is cheered for her flawless performance as Halime Sultan in Dirilis Ertugrul.

On the other hand, Pakistani actor Shaan Shahid is unhappy with PTV airing Turkish serial, Dirilis Ertugrul. He believes that the state should promote and produce local content instead.

The actor added that there is no need for celebrating the Turkish warriors. Instead, Pakistan should produce such projects on the local heroes of the sub-continent. His comments came in response to senator Faisal Javed’s tweet. The senator had shared the link of PTV’s YouTube channel airing Dirilis Ertugrul.