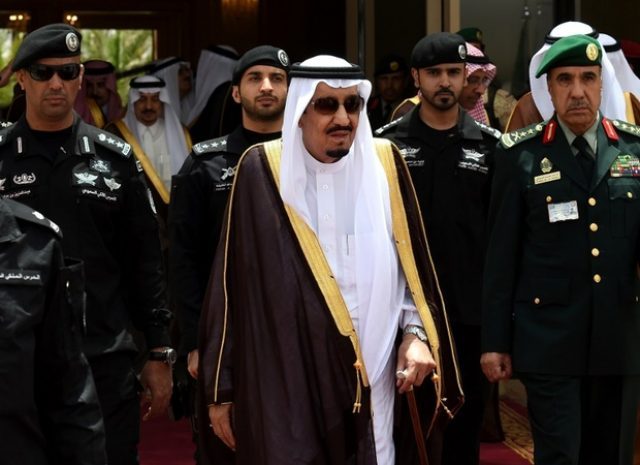 Christopher Davidson aptly pointed out, in his treatise “After the Sheikhs: The Coming Collapse of the Gulf Monarchies”, the root causes due to which a forthcoming demise of gulf monarchies can be anticipated. Nevertheless, recent developments in Saudi Arabia including the introduction of VAT (value added tax), appointment of Muhammad bin Salman (MBS) as deputy crown prince, recent arrest of Saudi princes, MBS’s aggressive foreign policy, and MBS’s ambition to modernize Saudi Arabia, evidently specify the imminent parting of a Saudi monarchy.

Role of the Oil Economy to Prop up Monarchy

Declining oil prices further instill and are currently infusing political, economic, and social instability in Saudi Arabia. Saudi Arabia is one of those countries which have been labeled as “rentier states” by social scientists and Middle Eastern experts. Saudi Arabia’s economy is simply an oil based economy, where oil accounts for nearly 80% of budget revenue and approximately 90% of export earnings.

MBS’s ambition to disrupt a deep-rooted pact between the clerics and monarchy by shifting Saudi Arabia into a moderate state. All these factors, point to the looming collapse of Saudi Monarchy in near future.

Oil prices are not merely generating a fiscal deficit, unemployment, and depleting foreign exchange reserves, there is more to it. The entire Saudi monarchical structure is dependent on the oil economy. Oil revenues enable the Saudi monarchy to be the provider of wealth rather being an extractor of wealth. Hence, an alien nature of relationship exists between the society and state in Saudi Arabia, where state/monarchy provides wealth rather than extracting and in turn the society accepts the legitimacy of the state/monarchy and does not demand for political representation.

Additionally, the concept of taxation which was absent in Saudi Arabia, has emerged, due to declining revenues; Saudi government has introduced VAT on certain goods.  Under vision 2030, which has been proposed by MBS, many more new taxes will be implemented and public subsidizes will be eradicated.

Saudi Arabia is a country with nearly fifty percent of its population under 25 and with an approximately 30% unemployed youth. According to few economic experts unemployment will be doubled by 2030, if the government fails to implement its vision of 2030. Dependence of the people and Saudi Monarchy on a social contract reliant on an oil economy/rentier income, vision 2030 is the last hope to retain this contract, otherwise, the demise of monarchy in Saudi Arabia is foreseeable.

Lowered oil prices, changing relationship between the Saudi monarchy and society, political instability due to elevation of MBS and recent arrest of princes, failed foreign policy adopted by MBS.

MBS may have played the wrong move by arresting hundreds of princes in an alleged corruption purge. It is an open secret that corruption, lavish lifestyle, and extravagant spending are wide spread in Saudi monarchy; recently MBS, himself purchased an expensive yacht of nearly $500 million. Consequently, according to most of the experts on Middle Eastern Affairs, the recent arrests have more to do with power consolidation by MBS than corruption purge. Nevertheless, backlash of these arrests are surely to arise in near future which can further add to already shaky political environment.

Last, during recent interviews and other occasions the most powerful player, MBS, in Saudi Arabia right now, has revealed his ambition to convert Saudi Arabia into a more liberal country. According to him Saudi Arabia cannot afford to be a conservative country anymore, consequently, he has already introduced relaxations for women and announced further reforms. Additionally, many reforms including promoting entertainment for youth, elevation of tourism, and reforms in education has been proclaimed in vision 2030. This move has been applauded by certain fractions of society.

Though, in reality it will not be a tranquil chore to transform an ultra-conservative Saudi Arabia into a moderate country. Ultra-conservative Wahhabi clerics are the binary source of legitimacy for the regime. This support by clerics is not one-sided, in fact, a pact took place between Al-Saud and Al-Wahhab, according to which Al-Saud will ensure protection and incentives, and in return Al-Wahhab will offer religious backing for the regime. That pact is still intact, nevertheless, new and inexperienced crown prince desires to break this pact by modernizing the state of Saudi Arabia without the approval of the clergy. Where the entire state structure/monarchical legitimacy revolves around religious backing, all of a sudden, aiming to alter this structure by instilling a moderate environment, rather than an ultra-conservative one, is quite naïve.

Lowered oil prices, changing relationship between the Saudi monarchy and society, political instability due to elevation of MBS and recent arrest of princes, failed foreign policy adopted by MBS, and MBS’s ambition to disrupt a deep-rooted pact between the clerics and monarchy by shifting Saudi Arabia into a moderate state. All these factors, point to the looming collapse of Saudi Monarchy in near future.

Junaid Jhandad is a lecturer at NUML University Islamabad in IR department and a Visiting Lecturer at NDU Islamabad in SS Department. He specializes in the area of International security, Middle Eastern security, political violence and terrorism, and international politics. The views expressed in this article are the author’s own and do not necessarily reflect Global Village Space’s editorial policy.