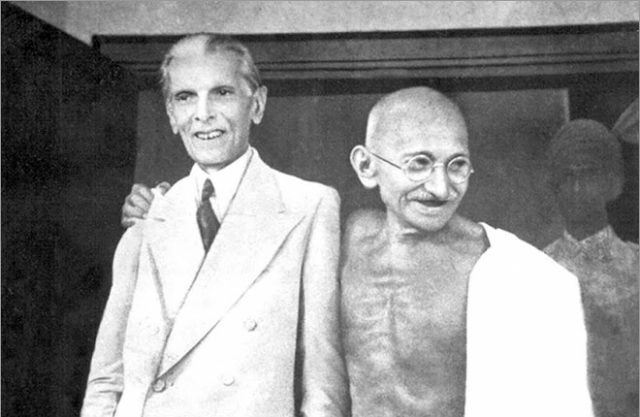 On the 71st Independence Day of Pakistan, it is useful that we remind ourselves why there had to be a separate nation for the Muslims of the Indian subcontinent. The following are excerpts from the letters exchanged between Quaid-e-Azam Muhammad Ali Jinnah and Mahatma Gandhi. From the 9th of September to the 27th of the same month in 1944, a total of 24 letters were exchanged between the two leaders, in addition to fourteen interviews or face-to-face meetings. The letters were released to the press on the 27th.

A brief look at these letters is very helpful in understanding what was going on in the minds of two of the most influential personalities in the Indian subcontinent, and probably, all of Asia at the time. The Lahore resolution had been passed in 1940 and the second world war was coming to a close. It was only a matter of time before the British left India. There had to some kind of agreement between the leaders of All India Muslim League and India National Congress about the path forward for independence.

I can only speak on behalf of Muslim India and the All-India Muslim League as the President of the organization which I represent and as such, I am subject to and governed by its constitution, rules, and regulations. I explained to you the Lahore resolution of March 1940 and tried to persuade you to accept the basic and fundamental principles embodied in it, but you only refused to consider it but emphasized your opposition to the basis indicated in that resolution and remarked that there was “an ocean between you and me”.

My life mission has been a Hindu-Muslim unity which I want for its own sake but which is not to be achieved without the foreign ruling Power being ousted. Hence the first condition of the exercise of the right of self-determination is achieving independence by the joint action of all the parties and groups composing India. It is true that I said an ocean separated you and me in outlook. But that had no reference to the Lahore resolution of the League. The Lahore resolution is indefinite.

I proceeded to discuss matters with you naturally because I am anxious to convert you to my point of view if possible. I urged on you that the only solution of India’s problem is to accept the division of India as Pakistan and Hindustan, as briefly laid down in the Lahore resolution of March 1940, and proceed to settle the details forthwith. You say the Lahore resolution is indefinite. You never asked me for any clarification or explanation of the terms of the resolution, but you really indicated you emphatic opposition to the very basis and the fundamental principles embodied in it.

You say “the first condition of the exercise of the right of self-determination is achieving independence by the joint action of all the parties and groups composing India”. This in my opinion, as I have repeatedly said, putting the cart before the horse. In order to achieve the freedom and independence of the people of India, it is essential, in the first instance, that there should be a Hindu-Muslim settlement.

I do hold that unless we oust the third party we shall not be able to live at peace with another. That does not mean that I may not make an effort to find and means of establishing a living peace between us.

Please let me have, as soon as you can, your promised letter indicating in what way or respect the Lahore resolution is ‘indefinite’ I hope that you do appreciate my point when I am requesting you to let me have rough outlines of the proposed provisional interim government according to the formula, so that I may have some idea.

Of course, I can quite understand that such a provisional interim government will represent all parties and would be of a character that will inspire confidence at the present moment of all the parties but before we can deal with this formula in a satisfactory manner, I repeat again that, as it is your formula, you should give me a rough idea of the provisional interim government that you contemplate and of your conception.

(This letter and the ones after it gets to the heart of the disagreement between Quaid-e-Azam and Mahatma Gandhi) with your assistance am applying my mind very seriously to the famous Lahore resolution of the Muslim League.

You must admit that the resolution itself makes no reference to the two nations theory. In the course of our discussion, you have passionately pleaded that India contains two nations i.e. Hindus and Muslims and that the latter have their homelands in India as the former have theirs. I find no parallel in history for a body of converts and their descendants claiming to be a nation apart from the parent sock.

It is my duty to explain the Lahore resolution to you today and persuade you to accept and even though you are talking to me, as you have often made it clear, in your individual capacity. I have successfully converted non-Muslim Indian in no small number and also a large body of foreigners and If I can convert you, exercising as you do tremendous influence over Hindu India, it will be no small assistance to me.

We maintain hold that Muslims and Hindus are two major nations by any definition of a test of a nation. We are a nation of a hundred million, and, what is more, we are a nation with our own distinctive culture and civilization, language and literature, art and architecture, names and nomenclature, sense of value and proportion, legal laws and moral codes, customs and calendar, history and traditions, aptitudes and ambitions-in short we have out distinctive outlook on life and of life. By all canons of international law, we are a nation.

I hope you do not expect me to accept the Lahore resolution without understanding its implications. If your letter is the final word, there is little hope. If the regions holding Muslim majorities have to be separated according to the Lahore resolution, the grave step of separation should be specifically placed before and approved by the people in that area.

I have already given you all the clarifications you require so far as the Lahore resolution goes and its text is concerned. You again raise further arguments, reasons, and grounds. It seems to me that you are laboring under some misconception of the real meaning of the word “self-determination.” Apart from the inconsistencies and contradictions of the various positions that you have adopted in the course of our correspondence, as indicated above, can you not appreciate our point of view that we claim the right of self-determination as a nation and not as a territorial unit and that we are entitled to exercise our inherent right as a Muslim nation, which is our birthright?

The more I think about the two nations theory the more alarming it appears to be. I am unable to accept the proposition that the Muslims of India are a nation distinct from the rest of the inhabitants of India. Mere assertion is no proof. The consequences of accepting such a proposition are dangerous in the extreme. Once the principle is admitted there would be no limit to claims for cutting up India into numerous divisions which would spell India’s ruin.

I can be no willing party to a division which does not provide for the simultaneous safeguarding of common interests such as defense, foreign affairs and the like….we seem to be moving in a circle. I have made a suggestion. Let us call in a third party or parties to guide or even arbitrate between us.

I am sorry that you think I have summarily rejected the idea of common interest between the two arms and now you put it somewhat differently. My answer, already given, is that it will be for the constitution-making body of Pakistan and that of Hindustan or any other party concerned, to deal with such matters on the footing of their being two independent states.

From the very first day of our talks you made it clear to me and you have repeatedly said in the course of our correspondence and talks that you have approached me in your individual capacity and you assured me that you were a seeker of light and knowledge and that you seriously and earnestly wanted to understand the Lahore resolution and were open to conviction and conversion. Therefore, in deference to your wishes, I made every effort all these days and in the course of our prolonged talks and correspondence to covert you, but unfortunately, it seems, I have failed.

Our talks and our correspondents seem to run in parallel lines and never touch one another. We reached the breaking point last evening but, thank God, we were unwilling to part. We resumed discussion and suspended it in order to allow me to keep my time for the evening public prayer. (Excerpts from Gandhi-Jinnah Talks-Text of correspondence and other relevant matter. Preface by Mr. C. Rajagopalachari, the last governor-general of India).

The rest of the letters make for an interesting read, as the two leaders exchange rhetorical arguments to substantiate their respective positions and mull over the various possibilities of forming a provisional government to facilitate a transfer of power. The efforts made by Quaid-e-Azam in trying to convince Mahatma Gandhi to his point of view are merely a microcosm of the mighty endeavor he made in winning a separate homeland for the Muslims of the Indian subcontinent.

Previous articlePakistan’s Imran Khan to be sworn in as PM August 18: Party
Next articleA.Q. Khan: Nuclear hero to Pakistan, villain to West

16 September 2021
Previous articlePakistan’s Imran Khan to be sworn in as PM August 18: Party
Next articleA.Q. Khan: Nuclear hero to Pakistan, villain to West

Pakistan’s new ambassador to US?