Netflix has a huge hit on its hands, thanks to Chris Hemsworth's lead role in ‘Extraction’. The movie is set to become the biggest Netflix film. Must watch for you if you're a MARVEL FAN! 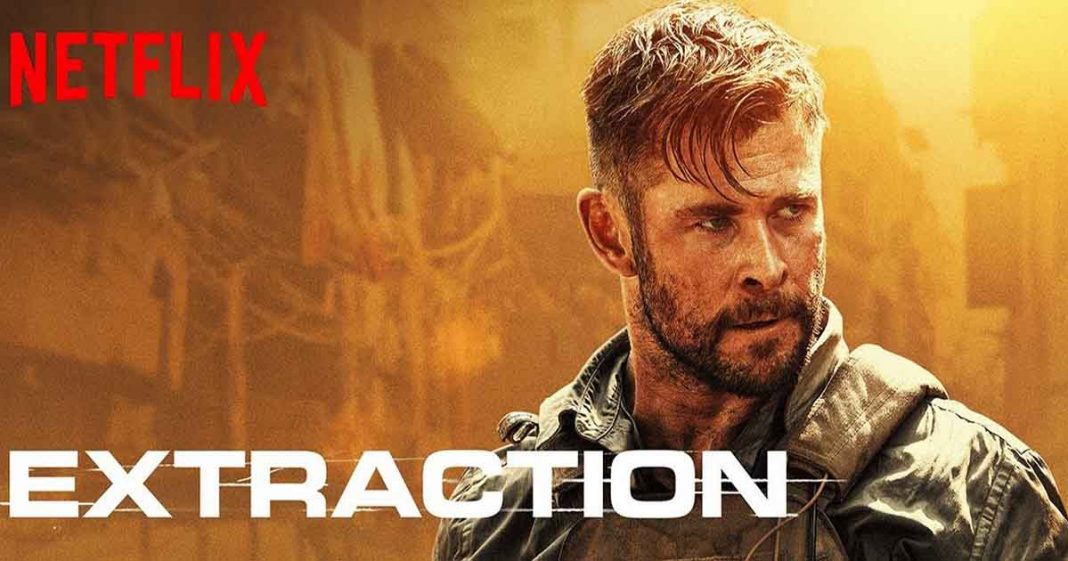 Netflix has a huge hit on its hands, thanks to Chris Hemsworth’s lead role in ‘Extraction’. The movie which premiered last month is set to become the biggest Netflix film of all time. The official Netflix account tweeted in celebration:

EXTRACTION is well on its way to becoming the biggest-ever film premiere on Netflix — with a projected 90 million households getting in on the action in the first 4 weeks.

Thanks to everyone who watched so far! pic.twitter.com/WqZWrW2gBV

“Extraction is well on its way to becoming the biggest-ever film premiere on Netflix — with a projected 90 million households getting in on the action in the first 4 weeks. Thanks to everyone who watched so far!”

Netflix measures the success of a film by how many clicks it gets on a movie and how many times it has been viewed. So if the film autoplayed for you or you clicked on the movie and saw it for a minute, for Netflix that’s a view. Granted, it is a bit of a cop-out with the streamer never fully revealing how many people finish their full series or movies. However given the game-changing success of Netflix, they have no-one to answer to at this point.

Why Extraction is such a big deal

Extraction is a special project of Netflix for all involved. Not only does it count as the directorial debut of Marvel stuntman Sam Hargrave, but it also reunites Marvel alum, Chris Hemsworth. Chris is known for playing the swoon-worthy god of thunder Thor in the Marvel Cinematic Universe with the Russo Brothers.

Russo Brothers conceived the graphic novel from which the movie seeks inspiration from and one of the brothers even wrote the screenplay for the feature. However, fans know the Russo Brothers for delivering some of the most epic superhero films in history as they directed Captain America: Winter Soldier, Captain America: Civil War, Avengers: Infinity War and Avengers: Endgame. So in a way, Extraction is a reunion for many of Marvel’s finest.

The film also works out well for Chris Hemsworth who has struggled to connect with audiences outside of his Marvel movies. And while there’s no telling if this will enable him to do well in other non-Marvel theatrical releases. It does birth a new franchise for him to be involved in after his Marvel days are over.

Of course, the biggest winner in all of this is Netflix. The company just saw its subscribers increase to 182 million worldwide. Plus, the service is enjoying a nice boost with people watching more entertainment programmes while sheltering at home. This propelled Netflix to a strong first three months this year. However, Extraction works for the streamer in another major way as well.

The streaming video giant has invested $400 million on Indian content for 2019 and 2020 that covers both originals and licensed content. During an earlier visit to India in 2018, CEO Reed Hastings had said that Netflix’s next 100 million subscribers will be “coming from India” given the fast growth of internet connectivity and usage in the country.

Hastings had also revealed that some of the Indian content on the platform is finding wider acceptance beyond India. There is a huge following of Bollywood in Middle Eastern countries as well as the immigrant population outside of India. This makes Netflix’s investment more than just for the Indian locals. Shows like Sacred Games have taken off too, while not enjoying the success of Money Heist, the show does stand among one of the most-watched foreign series from the East on the service. Extraction shooting in India only boosts the country’s economy which they work with on the production and expenditure of the film.

Bear in mind that Netflix doesn’t have a headstart in India with Amazon and Disney (in the form of Hotstar in India) having already made themselves at home. However, Netflix is making all the right moves, partnering with hotshot film stars like Saif Ali Khan and Shah Rukh Khan on projects, as well as well known directors such as Karan Johar and Anurag Kashyap to produce films and shows. And given its giant investment in the country as well as the love for Indian content around the world, it is no doubt that their relationship will pay off.

Read more: Tigertail: Of love and pain in the lives of immigrants

Who you got in a fight? Tyler Rake or John Wick? #Extraction @Bosslogic pic.twitter.com/KlGL0NlOLl

A sequel is expected

There’s little doubt that Netflix wouldn’t want to pursue a franchise with leading man Hemsworth as Tyler Rake given how much interest the first film has garnered. With Extraction being a gritty and street smart James Bond-type series, there’s a likely chance that the world is not seeing the last of Rake. There’s every possibility that the company will greenlight a sequel in a different exotic location around the world and attach bigger stars. And at the rate Netflix is going, that too will probably be a smash hit for the unstoppable streaming service.

Why “Avengers: Infinity War” is a must watch