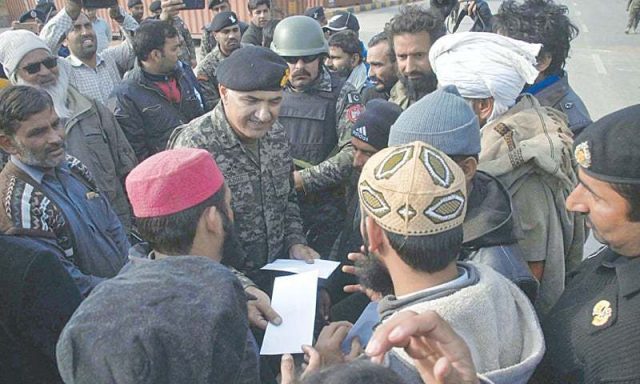 Let’s take this from the top.

The Faizabad sit-in started early in November. Obscure religious parties – foremost amongst them Tehreek-e-Labaik Ya Rasool Allah (TLY) – occupied the key throughway to protest the modifications to laws concerning the status of Ahmadis and the changes to the oath of belief in the finality of Prophet’s (peace be upon him) prophethood.

These changes could not possibly be a result of a “clerical error”, this much has been established.

But why touch this sensitive issue?

Capt. Safdar’s ideological peers now occupy the capitals nerve center. The dots are too close in proximity to not be connected.

Political analysts and commentators have implied that this focus on the Ahmadi issue is a tactic to pressurize a certain influential power player who is said to be associated with the Qadiani community.

Rewind to October 10th when Captain Safdar, son-in-law to Nawaz Sharif, unleashed a tirade against the Ahmadi community on the floor of the National Assembly. This was the first indicator for what was to come.

Capt. Safdar’s ideological peers now occupy the capitals nerve center. The dots are too close in proximity to not be connected.

The fact is that Khadim Hussain Rizvi was practically invited into the capital. He had announced his plans a fortnight in advance yet no attempt was made to placate him.

Reportedly, the cost of feeding the protestors is 25 lakhs per day and these costs are being borne by PML-N associated wealthy traders of Rawalpindi.

Law Minister Zahid Hamid, whose resignation was the principal demand of the protestors, was not even allowed to go on leave.

The so-called investigation committee led by senator Raja Zafar-ul-Haq purportedly came up with a report. This report was neither made public nor are there any indications that any action was taken as a result of the committee’s findings.

All of these facts indicate the true intentions of the government with regards to this protest.

On Saturday, the police launched an operation to disperse the protestors in accordance with the orders of the Islamabad High Court. Shortly afterward, the broadcast of all television news channels was suspended by PEMRA. Facebook, Twitter, and YouTube have also been blocked.

The Game Plan is now unfolding: Create a crisis by exacerbating the protestors. Force the military to intervene. Then, after making the issue a nationwide crisis, portray the military as being sympathetic to the Ahmadis when they suppress the protests, further stoking the fire. Use this as leverage to seek another NRO and create international sympathy.

What is abundantly clear is that this situation is not a spontaneous occurrence. Events taking place at Faizabad have the potential to change the national political landscape.

The question is: will the Chief take the bait? So far, it doesn’t seem likely. But what happens if the situation really gets out of control. If police fail to disperse the protestors, Rizvi and his fraternity would be emboldened even further. There is no telling how the situation will degenerate if this operation fails.

Currently, demonstrations are taking place in several cities including Lahore and Karachi. Prime Minister Shahid Khaqqan Abbasi and COAS General Qamar Javed Bajwa have reportedly been in contact. The Cheif has advised the PM to resolve the situation peacefully.

A military intervention is still unlikely. But if the situation degenerates into uncontrollable chaos, the army will be forced to intervene. The fluidity of the scenario makes it difficult to come up with distinct possibilities.

What is abundantly clear is that this situation is not a spontaneous occurrence. Events taking place at Faizabad have the potential to change the national political landscape.