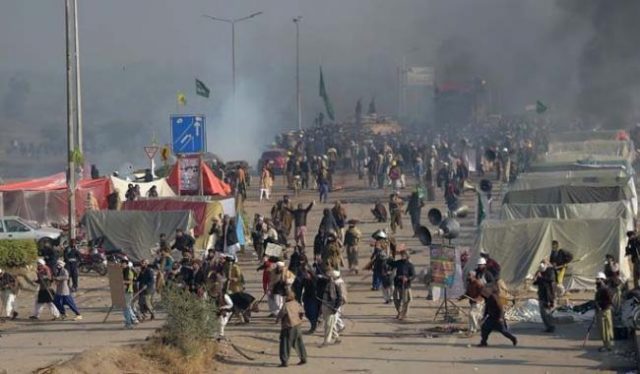 The good news is that Pakistan has successfully moved up from the state when it struggled to establish writ across the country; the bad news is that we are now in a state where we face a more complex and challenging task: establishing the state’s competence.

There is only one alternative to state’s competence: prayer. And when a government happens to be incompetent, people’s belief in prayers grows proportionally. A state’s competence is to governance as oxygen is to breathing. And Pakistan has a list, a long list, of governance failures.

If Faizabad Dharna was anything, it was about the lack of our government’s competence to establish trust, coordinate with the people and different agencies, restore law and order and diffuse the situation, not to mention the carelessness showed to the public’s rights and beliefs. The government that is already struggling with the accountability problem proved utterly incapable of resolving the conflict and solving the challenges it faced.

The government (quite contrarily to its unwise practice of restricting media coverage during Faizabad Operation) must acknowledge and pledge to honor the freedom and independence of news media.

The levels of Pakistan’s savings and investment are dolefully low. The export sector of Pakistan instead of serving as an engine of growth is continuously declining. As for the development of human capital, the government seems to be least concerned about its persistent negligence to focus on raising highly educated and skilled manpower, crucial to rapid economic growth.

Resultantly, at the national level, the economy is increasingly lagging in generating jobs required for its large young population and on the other hand at the international fronts Pakistan’s share in global manufacturing exports is declining.

In order to address the lack of our state’s competence and sweeping governance crises, Pakistan should reinforce democratic institutions; strengthen social policies; promote decentralization; promote an efficient public administration; build the capacity of its public sector to support the creation and application of knowledge, innovation, and technology for sustainable growth.

A state’s competence is to governance as oxygen is to breathing. And Pakistan has a list, a long list, of governance failures.

And to minimize the chances of risk in the future and cope with the pace and depth of growing challenges, the government must work to create common agenda and raise social capital. Finally, the government (quite contrarily to its unwise practice of restricting media coverage during Faizabad Operation) must acknowledge and pledge to honor the freedom and independence of news media. It needs not be reminded that in the absence of a free and independent media, good governance and transparency cannot take hold.

For enhancing and building our state’s competence, Pakistan must learn from the Chinese and Japanese experiences. Learning from China becomes especially more important because Pakistan needs to strengthen its national economic health. Surely there are some aspects of governance to be learned from the West. But as the West is rotting (especially because of its arrogance; military-centric policies; and polarizing national ethos), so it is better to be careful.

As for the people, it is their duty to struggle to make the government more inclusive, functional and accountable. People must remain active and vigilant and remember the warning The Spectator quoted more than two centuries ago that the “sloth has ruined more nations than the sword”.

5 leopards spotted in the hidden cameras at Margalla Hills Islamabad