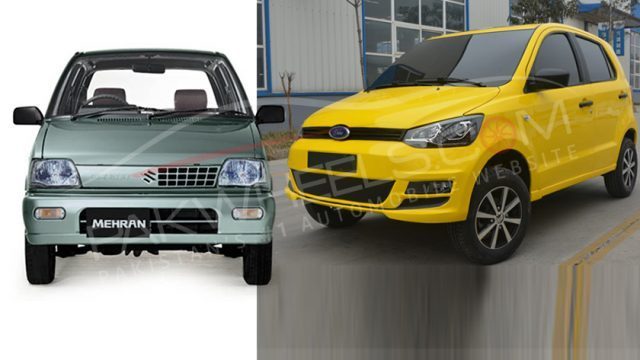 Suzuki Mehran and Nawaz Sharif have ruled Pakistan for over a span of three decades and the way things are going; the reign of both might come to an abrupt end.The 1989 prodigy and now an overpriced vehicle, the sales of Suzuki Mehran are finally in danger because of the announcements of United Bravo and Datsun Redi-Go. Under the latest government auto policy, numerous global and local automaker brands are looking towards entering the Pakistani market. Two of them are United Autos and Nissan. United Autos has already been operating under a motorcycle manufacturing flag and Nissan-Gandhara is all set to launch operations later this year. Both companies are going to launch domestic cars in Pakistan that could prove to be a death blow for Suzuki Mehran.

Although the ‘boss’ has faced criticism for lack of advancement in features over so many years, it still managed to sell more than 42,000 units during 2017. Last month, rumors surfaced that Suzuki has given into criticism and is revamping Mehran into a new Alto model. According to a local auto industry-specific publication, Pak Suzuki Mehran’s engine will be fitted into the new Alto. The new Alto variant will have a 796cc engine instead of a 660cc engine. Moreover, the new Alto might have a 5-speed manual. The possibilities for an Automatic transmission are slim, Global Village Space earlier reported.

Redi-Go can travel 25 kilometers per liter while 35 liters of petrol can be added in its fuel tank, which is a huge attraction for Pakistani audience, with sky high fuel prices lower income per capita.

Rumor has it that that Pak Suzuki has assembled a few units of this new car; reportedly 50 units. The units have been sent to be subjected to various types of testing. Once the testing is complete, Pak Suzuki will hopefully unveil this new car to the Pakistani market. Pak Suzuki has not made any official announcement about the new variant yet, its engine, its design and its release date.

Read more: 6 cars that blew our minds at the New York Auto..

United Autos has also announced launching an 800 CC car in Pakistan. This vehicle is named Bravo. Its engine will be 800 CC with three cylinders. United Autos Sales and Marketing General Manager Afzal told a local publication this car will have all the features and security arrangements that are not available in other local vehicles. United Motors recently leaked a semi-formal ‘first look’ of the United Bravo. With a spectacular hatchback outlook and a well-equipped interior, the car is rumored to be priced at PKR 6, 60,000 which is a little shy of what the Suzuki Mehran has been selling for.

This car’s length is 3,429 mm, width 1,560 mm, height 1,541 mm and wheel base is 2,348 mm. Redi-Go can travel 25 kilometers per liter while 35 liters of petrol can be added in its fuel tank, which is a huge attraction for Pakistani audience, with sky high fuel prices lower income per capita. A special feature of this car is that it has air bags which are not (would never have been) available in Suzuki Mehran. The company plans to introduce Datsun Go and Datsun Go Plus in Pakistan. Both these cars have also been seen test driving on Pakistan’s roads.

United Autos has also referred to Intellectual Property Organization of Pakistan (IPO) to get copyrights of this model’s design. The company has also established its manufacturing plant in Lahore. The tough competition between Mehran, redi-Go and Bravo will be exciting as the people in market are also awaiting the launch of these vehicles.