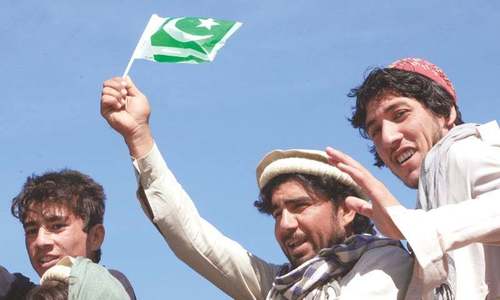 24th May 2018 marks a historic day as the National Assembly of Pakistan passed the long-awaited constitutional amendment to merge the Federally Administered Tribal Areas (FATA) with Khyber Pakhtunkhwa (KP).

All the political parties showed remarkable solidarity on this landmark day with a vote of 229-11 in favor of the merger.

The ruling party PML-N’s closest allies Jamiat Ulema-e-Islam-Fazal (JUI-F) and the Pakhtunkhwa Milli Awami Party (PkMAP) opposed the bill and decided to walk out of the house in protest.

According to the census of 2017, the population of FATA is 4, 996, 556 and it has 12-general National Assembly seats out of the total 272. FATA is comprised of seven passes; Bajaur, Dir, Khyber, Mohmand, Peiwar Kotal in Kurram Agency, the Bolan Pass and Gomal in South Waziristan.

Fata’s merger with KP can bring prosperity and economic development in one of the most impoverished and neglected regions of the country.

Though mainstreaming FATA has been on the agenda for decades, none of the governments had ever shown seriousness to alleviate this land out of poverty.

In the PML-N government, the will was shown to mainstream the region but political altercation and coalition of the government became a major hurdle to float the bill in the Assembly. Many national and international elements were against the merger. Moreover, Afghanistan along with the section of the population and the political parties which favored otherwise did not conceal their opposition to this much-awaited merger.

Thursday witnessed an extraordinary session when the PTI Chief Imran Khan was in attendance after an absence of two-years from the Parliament.

He specifically came to vote in favor of the FATA merger being a vivid campaigner of the cause.

Nevertheless, he could not manage to avoid the controversy. During his address to the
Parliament, Imran Khan congratulated the parliamentarians from all the parties for putting aside the differences for a national interest.

After reflecting on the benefits of the merger, he first spoke over his party’s epic struggle to oust Nawaz after the alleged rigging in 2013 general elections and on the revelation of the Panama Papers which depicted that Nawaz Sharif’s children had bought the properties worth millions of dollars using the money laundered from Pakistan.

These remarks ignited a huge uproar from government benches especially when he addressed Nawaz as a money launderer. The PTI lawmakers chose to walk out of the house after his 13-minute speech.

Right after his speech, Prime Minister Shahid Khaqqan Abbasi raised objection over Imran Khan’s decision to speak on such a controversial topic on a blessed day. He congratulated and thanked the opposition for voting in favor of the ‘historic bill.’

A long road to success

After delaying the bill, amid pressure from opposition parties, the government decided to go against its coalition partners to finally present the bill only a few days before the end of its tenure.

MQM-P supported the bill only for the sake of political unity for the country, otherwise, according to Farooq Sattar, FATA should have become a separate province.

The rulers of this country usually made decisions which suited best to their crony allies.

No one cared if the tribesmen were deprived of their fundamental rights as long as their friends and associates of the super-rich crones were served well.

The militancy-hit and economically damaged people of tribal areas were denied their rights to protect the interests of small parties with only a meager/small presence in the Provincial and National Assemblies.

The Chief of Army Staff General (COAS) Qamar Zaman threw ihis weight behind the merger. He assured tribal elders of full Army support in mainstreaming the region according to the wishes and aspirations of the tribal people.

At the start of this year in January, after the National Assembly passed the bill and extended the jurisdiction of the Supreme Court and the Peshawar High Court to FATA, It was the first practical step towards the much-awaited mainstreaming of the region.

According to the government, an estimated Rs100 billion will be required to initially provide all the basic facilities. Moreover, a massive push is expected to start next year to unleash a wave of development in one of the most deprived areas of the country and to put a smile back on the faces of its people who have suffered the most in recent past.

Political parties may have passed the bill but the implementation of the reform package is the daunting task facing the next government.

If the government shows will, it can overcome the constitutional and political challenges to achieve the prosperity for the most deprived generations of the country.

FATA and KP had been running under systems which are completely alien to each other. Overcoming the administrative and legal differences will take time and will to allow them to work as one coherent unit.

California moms on frontline of battle against homelessness