Justice Faez Isa personally appeared before the 10-member bench of the apex court and convey his wife’s message. “FBR humiliated my wife,” said the judge. Read this report for details. 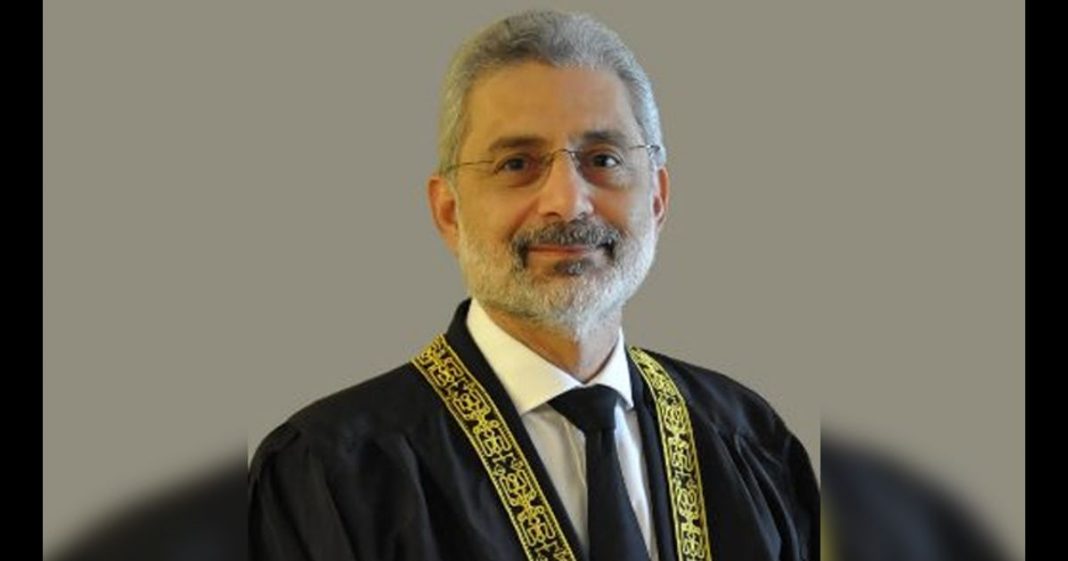 Justice Qazi Faez Isa appeared before the Supreme Court of Pakistan and explained conveyed his wife’s message to the bench hearing the case pertaining to a presidential reference against him on Wednesday. Justice Isa also said that that the FBR (Federal Board of Revenue) had humiliated his wife. He informed the court that his wife wants to reveal her sources of income before the apex court via video call, requesting the judges to grant permission for the same.

Judge ho tu aisa – Kudos to Justice Qazi Faez Isa. He volunteered before 10-member bench his wife is ready to answer questions from the panel about her British properties.— Tariq Butt (@tariqbutt_) June 17, 2020

“My wife has suffered a lot due to the presidential reference against me. Today I want to convey her message to court that she wants to talk about her assets in the UK through a video call. She isn’t in a position to write a written reply. Her father is suffering from cancer,” Justice Isa said during the hearing, to which SC judge Justice Umar Ata Bandial remarked that this was a positive development in the case.

Justice Qazi Faez Isa himself appeared before SC on Wednesday. He told court that he is 'messanger' of his wife who is willing to disclose source of fund regarding purchase of UK properties before full court through video link. SC has taken short break to consider her request.— Hasnaat Malik (@HasnaatMalik) June 17, 2020

The judge said the statement of Justice Isa’s wife will be crucial and will help ensure transparency in the case. After hearing Justice Isa’s arguments, the federal government’s lawyer Farogh Nasim said that he respects Justice Isa and his wife and doesn’t have any personal enmity against him.

Back in October 2019, the government informed the Supreme Court (SC) that Justice Qazi Faez Isa was the ‘ostensible owner’ of three properties in the United Kingdom as his family members purchased the assets at a time when they had no independent source of income. The government in its response lamented over the behavior of Justice Isa who instead of addressing the questions raised in the reference started vilifying the complainant. The response was submitted by then-Attorney General of Pakistan Anwar Mansoor Khan.

“The petitioner’s spouse and children own expensive properties in the UK which were purchased in the year 2004 and 2013 at a time when they had no independent source of income of their own. The inescapable conclusion which follows is that the properties are Benami and that the petitioner is the ostensible owner,” it said.

Justice Isa has questioned the eligibility of SAPM Shahzad Akbar’s appointment as the head of the Asset Recovery Unit (ARU) and for public office. Justice Isa has raised some points on what experts believe to be ‘some valid technical grounds’ and maintained that the appointment of the SAPM was illegal.

The Supreme Court inquired about where the ARU received funds from for initiating an investigation in Justice Faez Isa case. The court maintained that there can be no investigation through illegal means to obtain personal information.

It is important to recall that the Supreme Court Bar Association (SCBA) has made it clear that it would stand by Justice Qazi Faez Isa. The SCBA believes that “the reference was illegal and filed with mala fide intention”. As the SCBA stands by Justice Faez Isa, the battle for the government has become even complex and tough.

A resolution on the matter was adopted during the 22nd meeting of the SCBA’s executive committee on June 6 in Islamabad which was presided over by SCBA President Syed Qalbe Hassan.

Why did you write letters to the President? SJC issues show-cause notice to Justice Qazi Faez Isa