The Cuban revolutionary 'Fidel Castro' performed a central role in overthrowing the US-backed dictator Fulgencio Batista in 1959 through guerrilla warfare. He then held sway over Cuba for half a century, making him one of the world's longest-serving government leaders. 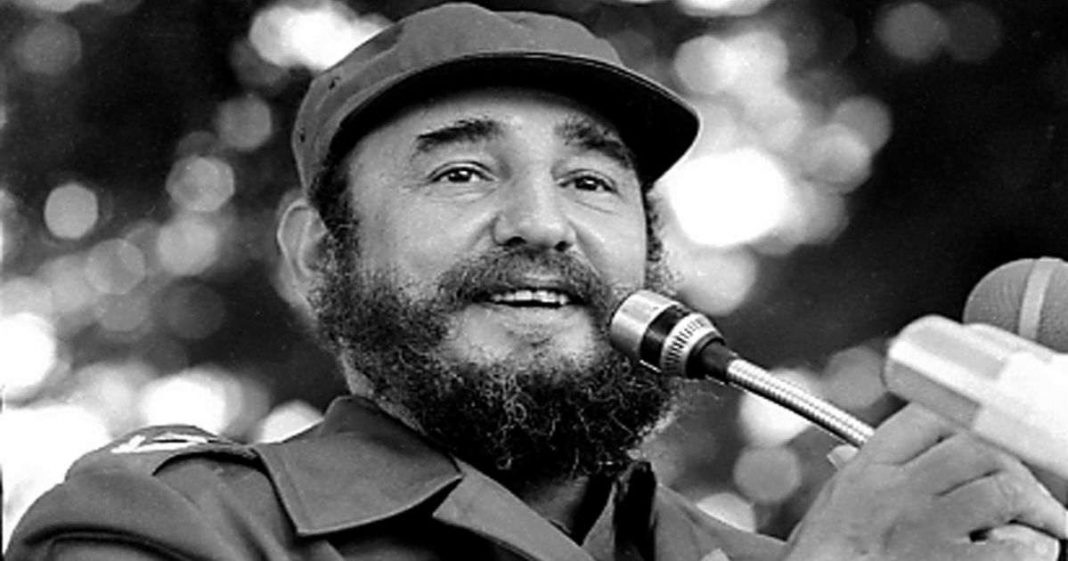 Examining the introduction of communism to Cuba over 60 years ago, and the revolution’s survival despite large-scale American attacks, one can conclude these occurrences would likely not have been possible without the involvement of Fidel Castro, the country’s former head of state. The Cuban revolutionary performed a central role in firstly overthrowing the US-backed dictator Fulgencio Batista in 1959 through guerrilla warfare, and he then held sway over Cuba for half a century, making him one of the world’s longest-serving government leaders.

History and the life of Fidel Castro

Castro was among the most influential men in living memory. From 1959, until his death 57 years later, Castro enjoyed the backing of the majority of Cuba’s people. His popularity was highlighted early on by the Central Intelligence Agency (CIA) in a secret document since declassified, ‘he retains widespread support among the poorer classes’, in the effect of the Cuban population. This view is supported by a US National Security Council (NSC) Memorandum, which noted to its dismay how “Castro still has great support at the grassroots.”

Nor was Castro’s popularity restricted to Cuba, as the CIA file even outlines. The longer his revolution survived the more he attained hero status with leftist circles across Latin America, and also in parts of Africa, following his direct intervention in that continent. An analysis of Castro’s career reveals that he produced two notable miracles: First, that he managed to evade over 630 illegal attempts on his life, a number of assassination plots on one person never compiled before or since, and yet – through extreme caution, cunning and some luck – he frustrated his enemies time and again.

The second miracle constitutes the fact that his revolution endured, despite concerted attempts to topple him by governments and special services of America

The second miracle constitutes the fact that his revolution endured, despite concerted attempts to topple him by governments and special services of America, the world’s most powerful country. This latter miracle increased in scope when reflecting on the 1991 collapse of the USSR, Cuba’s major ally and largest trading partner by far.

As the Soviet Union was falling apart, Castro was by then aged in his mid-60s and in power for over 30 years. He was faced with what was his greatest challenge. The loss of Soviet support precipitated a level of devastation in Cuba, a small nation, that was worse than the turmoil inflicted by the Great Depression on North America and Europe. Moreover, Cuba remained under a punishing embargo enacted by Washington, which was tightened by the Clinton administration during March 1996. In 1992 the CIA had estimated that Castro would survive for another two years, as recalled later by Wayne Smith, a former US diplomat.

On global issues, Castro was the first leader to address the climate change crisis. His warnings on this planetary threat were expressed as long as 28 years ago, at the June 1992 Earth Summit in Rio de Janeiro, Brazil – where 108 heads of state were present. Lan Angus, the experienced Canadian environmental activist, wrote of Castro’s stance on climate problems that “He was the one head of state who spoke out strongly in Rio and called for immediate emergency action”. Angus recounted that “Castro then returned home to support the implementation of practical policies for sustainable, low emission development.”

Pertaining to other areas, the Cuban government wasted little time in enacting universal literacy programs, while they also developed a remarkable healthcare system. From 1959 to 2005, the average life expectancy of Cuban citizens rose by 15 years, a greater increase by comparison to the US during the same time. This came in spite of an American blockade, which among other things deliberately targeted important medical equipment that Cuba could not obtain as a consequence.

The Canadian journalist and author, Keith Bolender, discerned that Cuban children are especially prone to the embargo’s brutal effects. Some youngsters have needlessly perished through being denied life-saving treatments for illnesses because of the US embargo. Bolender writes in his work Cuba Under Siege that one of the reasons for this strangulation “is to counteract the substantial amount of international political capital Cuba has achieved, with its involvement in sending doctors and staff around the world.”

Castro government played a decisive part in defeating rampant oppression and apartheid in southern Africa. From the 1970s, tens of thousands of Cuban troops were flown to the region, along with healthcare workers, teachers, technicians, etc.

Havana’s focus on healthcare includes the pursuit of medical internationalism, mainly in the world’s poorer countries. During the coronavirus crisis, Cuba’s medical personnel have been at the frontline in some of the worst-affected nations. Cuban doctors and nurses were, for example, flown to Spain and Italy to aid these reasonably wealthy states in their fight against Covid-19. The far-right government in Brazil has in recent days been forced into a humbling U-turn by rehiring over 150 Cuban medical experts.

Elsewhere, it can be noted that the Castro government played a decisive part in defeating rampant oppression and apartheid in southern Africa. From the 1970s, tens of thousands of Cuban troops were flown to the region, along with healthcare workers, teachers, technicians, etc.

Merits and demerits of Castro’s government

While it is important to highlight the Cuban revolution’s commendable achievements, it may be necessary for covering some of its less palatable aspects. In July 2016 the acclaimed American author and activist Noam Chomsky, while at pains to mention the more destructive US actions, said “There have also been severe human rights violations” committed by Cuba’s authorities.

This is primarily with regard to the shootings of Batista’s underlings. Many of these ex-Batista henchmen, previously bankrolled by Washington, had recorded as murderers and torturers. Yet the execution of people, extrajudicially or not, can only be regarded as crimes which any human rights organisation will agree on. Instead of shooting Batista’s former loyalists, lengthy prison sentences should have been handed out which, not only more just and humane, would have acted as an equally firm deterrent.

The executions were endorsed with rigour by Castro’s younger brother Raul, and likewise, Ernesto “Che” Guevara, who sanctioned in writing some of them. Guevara wrote to a friend in early February 1959 that “The shootings were a necessity for the people of Cuba”. Richard Gott, the left-leaning English historian and Latin American specialist, outlined in his book Cuba: A new history, that “Guevara personally signed at least 50 death sentences, while Raul was alleged to have presided over the mass execution of 70 of Batista’s soldiers, shot down with machine guns in front of an open trench. Always known as a radical, with a toughness that bordered on brutality, Raul’s hawkish reputation was publicly confirmed by his elder brother.”

Fidel commented that “If he was killed, someone younger and more radical than himself would take over (Raul). As commander-in-chief.” However, the older Castro was ultimately responsible for human rights abuses under his leadership. Gott, who travelled to Cuba on different occasions and had met Guevara, wrote that “Several hundred former Batista associates, policemen and torturers were shot by firing squad after perfunctory trials… the executions took the shine off the Revolution for many outsiders.”

The seeds of Stalinism were present in the early Bolshevik years, partly attributable to the exigencies of the civil war and foreign invasion, partly to Leninist ideology. Under Stalin, it became a monstrosity

In more recent times, complaints of human rights breached against the Castro government, led by Human Rights Watch (HRW) and Amnesty International, have centred mostly on the repression of civil liberties; rather than executions which had become increasingly rare. Due to the pressure on Cuba from the American colossus – which is growing again under President Donald Trump – one can at least understand the Cuban government for feeling paranoid, and in clamping down on protests. Extraordinary circumstances clearly exist in Cuba which should be taken into account.

By far the worst human rights violations in Cuba this century have occurred in the country’s south-eastern corner – at the US-run Guantanamo Bay Naval Base – where a military prison was opened in January 2002 under president George W. Bush. Over elapsing years hundreds of prisoners taken from far-flung places, many of them mere suspects, have been held at the Guantanamo prison camp without charge, and torture has been committed there on occasion. Other detainees have had no access to lawyers or family for extended periods.

Focusing on Cuba’s government once more and specifically Castro, he professed himself to be “a Socialist, a Marxist and a Leninist.” Yet the latter figure, Lenin, from the beginning of his takeover of Russia had discarded many of the socialist ideals that his supporters had fought for. Chomsky said of Lenin and the Soviet Union, “I would place the abandonment of socialism much earlier, under Lenin and Trotsky, at least if socialism is understood to mean at a minimum control by working people overproduction. The seeds of Stalinism were present in the early Bolshevik years, partly attributable to the exigencies of the civil war and foreign invasion, partly to Leninist ideology. Under Stalin, it became a monstrosity”.

Examining the system of governance in post-1959 Cuba, one can query whether socialism, in reality, exists there. Gott wrote how, “Castro allowed the Russians free rein in reorganising the Cuban economy, but in foreign affairs, he ran the show himself”. From various literature available on Cuba, there is little evidence of public participation in production or economy, nor in decisions on foreign policy ventures, however heroic they were.

Nevertheless, there are mitigating circumstances involved in Cuba’s case. This entails the blows unleashed on the country by US governments. It began in the spring of 1959 with bombing and incendiary air raids, carried out by right-wing Cuban exiles operating freely from Miami, Florida. The aerial raids on Cuba increased in frequency during the winter of 1959-1960, causing some alarm on the island. It can be instructive to learn how the Castro government reacted.

Chomsky wrote that “We need not tarry on what the US or its clients would do under such circumstances. Cuba, however, did not respond with violent actions within the United States for revenge or deterrence. Rather, it followed the procedure required by international law. In July 1960, Cuba called on the UN for help, providing the Security Council with records of some twenty bombings, including names of pilots, plane registration numbers, unexploded bombs, and other specific details, alleging considerable damage and casualties and calling for resolution of the conflict through diplomatic channels”.

Overwhelming evidence of attacks emanating from America was provided by Castro to the UN. America’s Ambassador to the UN, Henry Cabot Lodge Jr., assured that “The United States has no aggressive purpose against Cuba”, which was, quite clearly, a falsehood. Four months before, in March 1960, the Eisenhower administration had made a formal decision in secret to overthrow Castro.

Shane Quinn has contributed on a regular basis to Global Research for almost two years and has had articles published with American news outlets People’s World and MintPress News, Morning Star in Britain and Venezuela’s Orinoco Tribune. The views expressed in this article are the author’s own and do not necessarily reflect Global Village Space’s editorial policy.