Fighting climate change in the shadow of Mount Everest 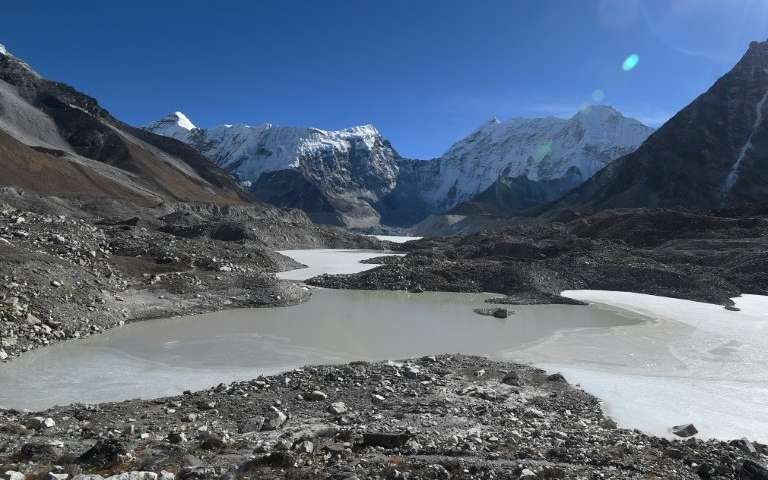 Formed in the shadow of Mount Everest, the turquoise depths of Nepal’s Imja glacial lake would be a breathtaking miracle of nature to behold — were they not a portent of catastrophic floods. Scientists warn that as climate change causes Himalayan glaciers to melt at an alarming rate, lakes like Imja could swell further and eventually collapse, triggering a terrifying deluge in Nepal, an impoverished nation at the mercy of a warming planet.

Those tasked with staving off disaster fear a ‘glacial lake outburst flood’ — sending torrents of water, mud and rock hurtling downstream — could reach as far as Nepal’s densely populated southern plains, wiping out roads, vital energy projects and entire villages in its path.

The lake was lowered by 3.5 metres, draining more than five million cubic metres of water. “Now, you have a channel.

“The risk is getting bigger,” said Arun Bhakta Shrestha, a climate scientist from the Kathmandu-based International Centre for Integrated Mountain Development. “These valleys are getting more populated, and infrastructure is developing rapidly.”

Hundreds of these lakes have appeared out of nowhere in the Himalayas in recent decades. A 2014 survey found one quarter of Nepal’s glaciers shrunk between 1977 and 2010, leaving behind 1,466 lakes. Twenty-one have been identified as potentially dangerous and Nepal is racing to stay a step ahead of disaster, as global warming reshapes its mountain geography.

“As a small country, there is little we can do to stop what is happening to our glaciers,” said Rishi Ram Sharma, the director general at Nepal’s department of hydrology and meteorology. “But we have to do what we can do to adapt and protect our people.”

Nepal’s fastest-growing lake, Imja once posed little threat to the villagers of Surke, a picturesque hamlet perched high in the Everest region. In the early 1980s, the small lake at the foot of the Imja glacier at 5,010 metres (16,437 feet) was unremarkable.

But by 2014, it had more than tripled in size, contained only by a natural wall of debris, known as a moraine, which experts warned might not hold back the waters much longer. A year later, when a massive earthquake struck Nepal, villagers in Surke assumed Imja had collapsed and would soon bury them all.

“We were terrified the quake would trigger a flood from the lake. All of us ran for safety,” villager Phudoma Sherpa told AFP. The lake miraculously held — sparing the 12,000 people directly in its path. But the quake served as a wake-up call for policymakers.

Experts told the government that the gigantic glacial lakes were effectively a ticking time bomb.  With thousands of lives at stake, a massive undertaking began in late 2016 to drain Imja, which then measured 150 metres deep and two kilometres (1.2 miles) long.

Only the second operation of its kind in Nepal’s history, the project was a testament to the monumental challenge posed by glacial lakes, which are often remote and very difficult to access.

Yaks and helicopters transported materials and teams of workers to the high-altitude region, where they toiled in thin air for six months until a drainage canal and early-warning system were installed.

Nepal’s fastest-growing lake, Imja once posed little threat to the villagers of Surke, a picturesque hamlet perched high in the Everest region.

The lake was lowered by 3.5 metres, draining more than five million cubic metres of water. “Now, you have a channel. So any water that accumulates is drained out. That is how the risk is lowered,” said Deepak KC, a climate change analyst from the United Nations Development Programme that backed the project.

The project cost $7.4 million, an expensive commitment for a nation heavily reliant on its wealthier neighbours and on international aid that contributed 12 percent to its GDP in the last fiscal year. In this case, over 80 percent of the money came from the Global Environment Facility, an international fund that provides green financing to developing countries. The rest was covered by UNDP.

With a paltry economy and 26 million people, Nepal has a tiny carbon footprint compared to its giant patrons China and India, major polluters that are home to a third of humanity. Melting glaciers from climate change pose a huge threat to Nepal — as well as an undeserved extortionate burden, authorities say.

“We feel as if we have been penalised for the mistakes we never made,” President Bidya Devi Bhandari told world leaders at a climate summit in Poland this month. “We are compelled to spend (a) significant amount of our national income in addressing disasters-induced problems.”

Nepal is asking the global community for further assistance to fight climate change. For those no longer living under Imja’s shadow, the cost is well worth it. “There was a sense of fear before, but we feel a lot safer now,” said Sherpa.