Focusing on ISIS: Are we losing sight of a bigger enemy in Afghanistan? 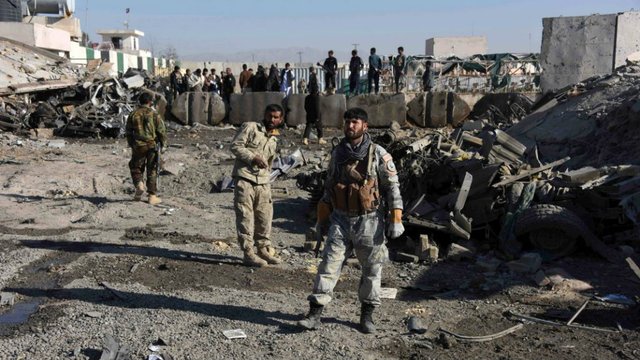 On April 13, the U.S. military dropped a huge bomb on caves and tunnels used by Islamic State fighters in eastern Afghanistan. The resulting blast reverberated several miles away, reportedly killing dozens of terrorists, and exposing the poverty of U.S. policy in Afghanistan.

The “mother of all bombs” was devastating — but it was used against the wrong target, for the wrong reasons. Analysts and Trump administration officials, including Vice President Mike Pence, have suggested that the bomb was targeted more at intimidating North Korea and Syria than battlefield objectives in Afghanistan.

The Islamic State’s savagery has drawn eyes away from the true danger: the Taliban and al Qaeda, which continue to sit pretty after nearly 16 years of unsuccessful efforts at elimination.

It’s true that Islamic State-affiliated militants in Afghanistan have claimed a series of attacks over the last few years — including, most recently, a hit on a NATO convoy in Kabul on May 2 that killed eight civilians. Still, they’ve struggled to carve out a major presence in the country. They’ve alienated locals with their savagery and made the Taliban look gentle in comparison. Punishing and sustained U.S. strikes, often undertaken jointly with Afghan forces, have already killed their leaders and badly degraded their ranks.

Taliban and al Qaeda: Not to be neglected

Now, according to top U.S. officials, that threat is backed by another old foe, Russia. On April 24, Gen. John Nicholson, the top U.S. commander in Afghanistan, said during a visit to Kabul by Secretary of Defense James Mattis that he was “not refuting” multiple reports that Moscow is funneling arms to the Taliban. In congressional testimony back in February, Gen. Nicholson had already said that Russia is “overtly lending legitimacy to the Taliban.” But his allegations of direct material aid this time went much further.

In 2016, U.S. forces killed the al Qaeda leader in eastern Afghanistan, his deputy, and more than 200 al Qaeda and affiliated fighters.

The Taliban threat, now perhaps backed by Russian arms, is rising as rapidly as that of the Islamic State is declining. The Taliban controls more territory than at any time since 2001, civilian casualties are the highest they’ve been since these figures were first tracked in 2009, and fatality rates of beleaguered Afghan security forces are soaring. An April 21 assault on an Afghan military base in the province of Balkh, which killed nearly 150 Afghan troops in a region far from the Taliban’s traditional bastion in the south, underscores the serious nature of the threat.

Alongside (and not to be confused with) the Taliban is another persistent foe, al Qaeda. It’s been six years since the death of Osama bin Laden, but the group remains a powerful threat. Back in 2012, Gen. John Allen, then head of U.S. forces in Afghanistan, said that al Qaeda had reemerged in Afghanistan. Media reports stated that the group was fighting U.S. troops, spreading propaganda, fundraising, and recruiting young Afghans. That was confirmed in 2015 when the U.S. military discovered an al Qaeda training camp in southern Afghanistan stretching a whopping 30 square miles.

The extent of al Qaeda’s presence in Afghanistan today can be gleaned from Gen. Nicholson’s recent congressional testimony. He reported that in 2016, U.S. forces killed the al Qaeda leader in eastern Afghanistan, his deputy, and more than 200 al Qaeda and affiliated fighters.

Battlefield successes against al Qaeda won’t make the group go away any more than it did in 2001. In other words, killing off al Qaeda fighters and leaders won’t kill off the organization.

He also said that about 50 al Qaeda and affiliated “leaders, facilitators, or key associates” were killed, captured, or transferred to the Afghan government. The pattern has continued into this year. The Pentagon confirmed that a March 19 drone strike had killed Qari Yasin, who was implicated in a 2008 attack on the Marriott Hotel in Islamabad, Pakistan, that killed more than 50 people, including two Americans. And on April 19, Afghan officials announced that airstrikes had killed three al Qaeda members.

Some might seize on these figures to argue that the al Qaeda threat in Afghanistan is being robustly tackled, or at least being kept under control. While that may be true on a short-term, tactical level, it misses a broader, more troubling point: Battlefield successes against al Qaeda won’t make the group go away any more than it did in 2001. In other words, killing off al Qaeda fighters and leaders won’t kill off the organization.

The same goes for the Taliban. The war in Afghanistan can’t be won militarily; 100,000 U.S. troops couldn’t end the insurgency during the height of the surge in 2010 and 2011. Today, with far fewer U.S. troops in theater, the Taliban’s battlefield successes give it few incentives to launch a peace process with Kabul.

How has IS helped al Qaeda and Taliban

“Al Qaeda has transformed itself from a close-knit terrorist outfit with a handful of struggling affiliates into a vast network of insurgent groups spread from Southeast Asia to northwest Africa.”
– Ali Soufan

While the Islamic State is unrelenting and indiscriminate in its use of terror, al Qaeda has increasingly demonstrated a more refined targeting strategy that singles out “worthy targets” that appeal to potential recruits. Those murdered include progressive and secular thinkers and those harshly critical of Islam. Gartenstein-Ross and Barr also note that al Qaeda leader Ayman al-Zawahiri has called on regional leaders in Syria to cultivate better ties with local communities.

Read more: The Art of Making a Deal With the Taliban

We don’t typically associate terror groups with marketing campaigns, but al Qaeda is clearly trying to reinvent itself. In the words of counterterrorism expert Ali Soufan, writing in the Wall Street Journal on April 21, al Qaeda “has transformed itself from a close-knit terrorist outfit with a handful of struggling affiliates into a vast network of insurgent groups spread from Southeast Asia to northwest Africa.”

According to Soufan, this is part of al Qaeda’s broader goal, originally implemented in 2011, to shift away from a focus on the United States (“the far enemy”) and instead “join the popular battle to bring down” local regimes. The hope of the late Osama bin Laden, Soufan contends, was to strengthen al Qaeda for “an eventual showdown” with the United States.

And what better ally for al Qaeda in the Indian Subcontinent (AQIS) to pursue this hearts-and-minds strategy than the Afghan Taliban, one of the world’s most effective insurgent organizations? As Gartenstein-Ross has pointed out, AQIS has already engaged in “insurgent-style warfare” in Afghanistan to help support Taliban goals. Al Qaeda’s resilience there can also be attributed to its relationships with powerful local partners. It enjoys close ties to the most active and lethal terror groups in the Afghanistan-Pakistan region. These actors include the Haqqani Network, a branch of the Taliban that has committed several high-casualty attacks against U.S. troops in Afghanistan in recent years.

In September 2014, Khorasan Group members were targeted in one of the first U.S. airstrikes in Syria — an indication of the deep concern with which the Obama administration viewed this faction. U.S. air power hit them again there in 2016.

After reporting to Pakistan-based al Qaeda leader Ayman-al-Zawahiri, the Khorasan Group focused its efforts on stemming the tide of defections and by 2014 was planning out-of-area terrorist attacks. In September 2014, Khorasan Group members were targeted in one of the first U.S. airstrikes in Syria — an indication of the deep concern with which the Obama administration viewed this faction. U.S. air power hit them again there in 2016.

And while all eyes are on the Islamic State, al Qaeda still has very real potential to target the United States directly. Nearly 16 years after 9/11, it still poses a bona fide threat to the U.S. homeland. Al Qaeda may be trying to pass itself off as your local friendly insurgent group, but it continues to subscribe to the ideology of global Islamist terrorism — and there’s no reason to believe the organization has given up on its long-standing desire to stage another spectacular attack on American soil.

Read more: Taliban tell Trump to get out of Afghanistan

How to deal with the situation?

With the Taliban controlling large swaths of territory in Afghanistan, opportunities abound for al Qaeda to reconstitute its former sanctuaries and plot another attack on the United States. To be sure, a safe haven doesn’t necessarily facilitate the ability to coordinate faraway attacks, and particularly if one has to worry about defending territory from state security forces. However, consider the current state of play in Afghanistan: Overmatched Afghan forces and depleted foreign troops have been unable to penetrate many areas of Taliban control, some of which are located in difficult-to-navigate terrain in places like Uruzgan, Helmand, and Kandahar provinces.

The relentless campaign being waged by Afghan and U.S. forces against al Qaeda on the battlefield shouldn’t be put on hold. On the contrary, it should be intensified.

One of America’s mistakes after waging war on Iraq in 2003 was taking its eye off the ball in Afghanistan following early successes. This time around, Washington needs to maintain a laser-like focus on depriving al Qaeda of new Taliban-shielded sanctuaries in Afghanistan. In so doing, it must make a better effort to understand what makes al Qaeda tick these days — and particularly how it has undergone a strategic shift that aims to win over populations it may have previously preferred to ignore. More attention must be paid to the ideologies of hate that fuel terrorism, no matter how many terrorists are shot down or smoked out. While ample analysis has rightly been dedicated to understanding the success of the Islamic State’s use of social media to radicalize Westerners, there remains a need to better understand the continued clout of al Qaeda ideology in the developing world, both in Afghanistan and beyond.

But the relentless campaign being waged by Afghan and U.S. forces against al Qaeda on the battlefield shouldn’t be put on hold. On the contrary, it should be intensified. Short-term tactical victories against al Qaeda matter, but they can’t be the endpoint of strategy.

Ramping up the counterterrorism fight shouldn’t be difficult. U.S. military officials have urged Washington to deploy more troops to Afghanistan, and President Donald Trump should send several thousand more. When he announces the decision, he shouldn’t justify it merely on the grounds of providing more support to Afghan forces. Such a rationale won’t sit well with an understandably war-weary American public.

Instead, he should underscore that more troops are being sent to Afghanistan to help prevent another attack on the U.S. homeland. That’s an “America First” justification if there ever was one. And it’s a more prudent move than dropping the mother of all bombs on a declining threat, just to telegraph a message of bravado to faraway foes.

Michael Kugelman is deputy director and senior associate for South Asia with the Asia Program at the Woodrow Wilson International Center for Scholars in Washington, DC. This article was first published in Foreign Policy and has been reproduced with permission. The views expressed in this article are the author’s own and do not necessarily reflect Global Village Space’s editorial policy.

Previous articleKashmir: An “integral part” of India, the most militarized zone in the world
Next articleIsrael-Palestine soccer battle puts FIFA in a pickle

21 September 2021
Previous articleKashmir: An “integral part” of India, the most militarized zone in the world
Next articleIsrael-Palestine soccer battle puts FIFA in a pickle

Activist dies in wave of increasing violence in Iraq