The Khyber Pakhtunkhwa (KP) Wildlife Department team and a WWF-Pakistan’s filmmaker captured a Himalayan lynx hunting a markhor on the steep, rocky cliffs of Chitral valley. Here is the video. 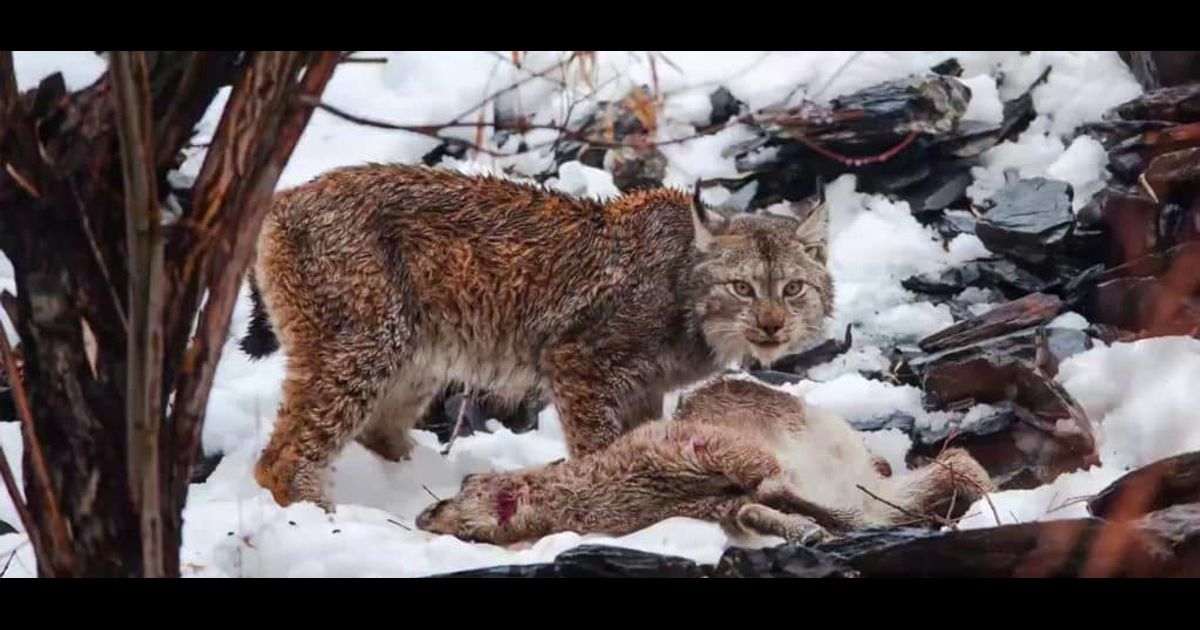 Khyber Pakhtunkhwa (KP) Wildlife Department team and a World Wide Fund for Nature-Pakistan’s (WWF-P) filmmaker captured a Himalayan lynx hunting a markhor on the cliffs of Chitral valley. According to an official statement, this is for the first time that a nocturnal hunter and highly elusive animal has been filmed in the area.

The lynx, locally considered as a rare species, is known to be present in Chitral, as well as other northern areas of Pakistan including Gilgit-Baltistan, read the statement, adding that the exact distribution and range are not known.

Recently, WWF-Pakistan’s filmmaker Nyal Mueenuddin and the KP Wildlife Department team were on a mission to Chitral to film the Kashmir markhor.

While filming a group of markhors outside Chitral town, the crew spotted a Himalayan lynx preparing for a hunt. The lynx did not attack the large group of passing markhors, but it caught a yearling markhor, which was grazing by the riverside along with its mother.

According to the team, when the lynx was sure that the prey had been killed, it retreated to a nearby tree to rest. The camera team waited for about an hour and a half before the lynx returned to the site of the hunt and began eating the carcass.

With a river separating the crew and the lynx, the filmmakers were able to move close to the lynx feasting on the markhor. Afterwards, the lynx returned to the cliffs where it perched itself on a rock to rest and digest. The crew also captured drone images of the cat on the rock. This illustrates how important it is to bring the right optics gear (like spotting scopes, cameras, and drones) with you when going to capture the wildlife.

Regarding filming of this hunt, Director General, WWF-Pakistan Hammad Naqi Khan said that the Himalayan lynx is one of the last remaining apex predators in the area.

Commenting on this rare shoot, Muhammad Idrees, Divisional Forest Officer (DFO Wildlife) said that the lynx attacks on ungulates, such as the Himalayan ibex and markhor, have been reported for the past many years and are common in Chitral, especially in Chitral Gol National Park.

He was of the view that humans are the biggest threat to wildlife due to an increase in the human population, retaliatory killings, habitat loss, habitat fragmentation, deforestation and lack of awareness regarding the ecosystem and food chains. However, hunting markhor is now prohibited.

The WWF-P recently issued a statement and warned that the country is going to face several challenges as of result of its inability to protect the wildlife. If the prevailing trend continues by 2020, the planet will lose two-thirds of its wildlife species. This can only be reversed if we accelerate and intensify our actions and investments which support wildlife conservation in the long run.

“Human activities and the accompanying use of non-renewable natural resources have grown so dramatically that since the mid-20th century, environmental conditions that fostered our development and growth are beginning to deteriorate. There is a need to understand the scale of human impact on the vanishing population of wild species and develop a robust mechanism to address this issue,” it says.

It also talks about the global threat to wildlife and states that nearly 58 per cent of all vertebrates, including fish, birds, amphibians, reptiles and mammals, have been wiped out directly as a result of human appetite and activities from 1970 to 2012.

Climate Change: A Serious Threat To World And Pakistan

Amazon rainforest being cut down at record pace under Bolsonaro

Rabi Pirzada acquitted in a case of keeping dangerous pets