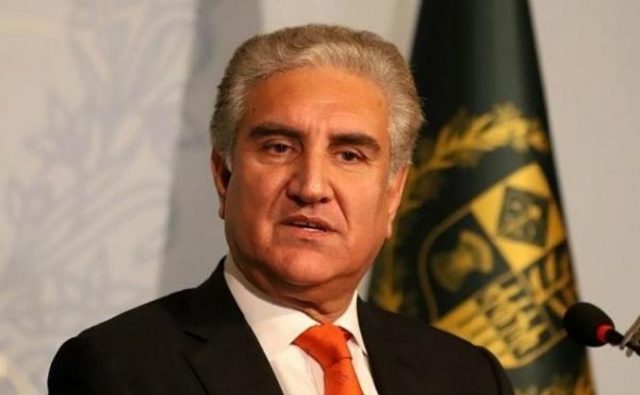 Shah Mehmood Qureshi, the foreign minister of Pakistan, is visiting Afghanistan for a one day trip on Saturday, the 15th of September. The fact that this is his first overseas visit underscores the importance of relations with Kabul for Islamabad. There has been a flurry of diplomatic activity since the new government took the reins of power. The American delegation came for a brief two-hour visit en route to India.

The US Secretary of State along with the Chairman of Joint Chiefs General Dunford met their Pakistani counterparts in what was described by the Pakistan foreign office as a ‘cordial visit’. Within two days, the Chinese foreign minister also came to Pakistan for a three-day visit in which the ‘all-weather friendship’ between Pakistan and China was reaffirmed. The Turkish foreign minister also visited in the past week. Last Sunday, Prime Minister Imran Khan also met the Saudi Media Minister Awwad Bin Saleh Al-Awwad.

The president of Afghanistan is essentially the mayor of Kabul along with some adjoining districts. What began as an insurgency in 2006 now threatens to take over the country.

After receiving and entertaining a series of delegations from other important countries, the foreign office of Pakistan is now set to send Pakistan’s representatives abroad. The Prime Minister, in his inaugural address, mentioned how peaceful relations with neighbors are critical to Pakistan’s security and international standing. In recent years, ties between Islamabad and New Delhi and Kabul have been particularly strained. Pak-Iran ties have also met various bumps along the road in the form of the delayed Iran-Pakistan gas pipeline, border management, and smuggling. Having ‘unfriendly’ relations with three out of four neighbors is unacceptable. It is a good sign that the new government is taking steps to remedy this situation.

On Friday, the senior civil and military leaders met at the PM secretariat for talks about bilateral relations and security. The Chief of Army Staff, the Director General of the Inter-Services Intelligence, the foreign minister, the foreign secretary was all in attendance. It is likely that talking points for the FM’s visit to Kabul were finalized during this meeting. The security of Afghanistan and Pakistan is likely to be on the agenda in Mr. Qureshi’s visit to Kabul.

Read more: After US, the Chinese foreign minister visits Pakistan

Ties with Afghanistan have almost always been problematic for Pakistan. After Partition in 1947, Afghanistan didn’t initially recognize Pakistan. The government in Kabul has persistently made irredentist claims on Pakistani territory that includes virtually the entire Khyber-Pakhtunkhwa province along with the former Federally Administered Tribal Areas. The Pashtuns are split between the borders of the two countries, with the majority on the Pakistani side and Kabul has attempted to fan the flames of sub-nationalism and ethnonationalism in Pakistan, arguing that the Durand Line was supposed to be abolished in a 100 years after being demarcated in 1893.

More recently, with Indian and American funding keeping the government afloat, Kabul blames Pakistan for instability and terrorism within its borders. Afghanistan is reeling from a series of terrorist attacks perpetrated by the Taliban. And 17 years into the war, Afghan security forces appear to be unable to handle the increasingly dire situation. District after district have been falling into Taliban hands over the years and more are likely to follow, as things stand. By some estimates, at least 48% of the country is in Taliban control. The president of Afghanistan is essentially the mayor of Kabul along with some adjoining districts. What began as an insurgency in 2006 now threatens to take over the country.

The success of the talks today can be judged by reciprocal invitation by Pakistan to the Afghan government to visit Islamabad for further talks. There is a consensus that political solution is the only way forward for peace and stability in the region.

There have been various attempts at ending the war in Afghanistan through dialogue. But it remains unclear who will dictate the terms of peace talks. The US government maintains Operation “Resolute Support” is a resounding success, despite suffering several tactical defeats. But the security situation on the ground seems to suggest the Taliban might have the upper hand. Talks have been organized by China, Pakistan, Russia, India, the US and Iran on various platforms. In this vein, the Afghanistan Pakistan Action Plan for Peace and Solidarity may prove to be a more viable path forward. After Kabul, Islamabad suffers the most from instability and terrorism in Afghanistan because these problems tend to cross-over into Pakistani territory through the porous border between the two countries.

Read more: Shah Mahmood to start a new era of cooperation with neighbors

The Afghan Foreign Minister Salahuddin Rabbani called on his Pakistani counterpart at the beginning of September to congratulate him on his new appointment and invited Shah Mehmood Qureshi to Kabul. The success of the talks today can be judged by reciprocal invitation by Pakistan to the Afghan government to visit Islamabad for further talks. There is a consensus that political solution is the only way forward for peace and stability in the region. 17 years of war have not achieved anything. By some accounts, the Taliban now control as much territory as they did before 9/11. It is time for a serious debate on how to end the longest war in modern history peacefully.

Previous articleAnother round of impeded back-door talks between the Taliban and the US expected
Next articleWhy IMF looks unavoidable?

26 July 2021
Previous articleAnother round of impeded back-door talks between the Taliban and the US expected
Next articleWhy IMF looks unavoidable?

Shahbaz Sharif Arrested: What Next?

Cricket returns to a Karachi plagued by water & energy shortages