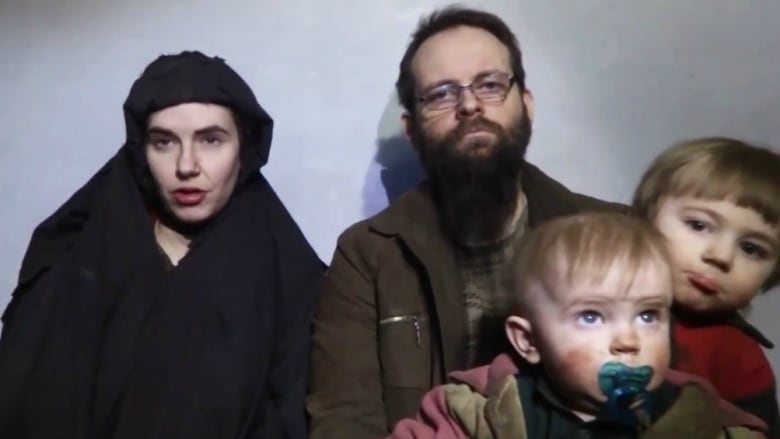 Caitlan Coleman, the recently freed member of the Coleman-Boyle family has given out details of violence and sexual assault perpetrated by Taliban-linked militants on her and her entire family during their 5 years of captivity.

“This was an intolerable situation for a child to be in,” Caitlan Coleman told ABC News on Monday. She expressed her regret at how her young son was beaten by their captors. Last month, the Pakistan Army rescued the five-member American-Canadian family in an Intelligence-Based Operation (IBO) in the areas adjacent to the frontier region of Kohat.

Caitlan Coleman, her three children, and her Canadian husband, Joshua Boyle were freed after a brief yet intense firefight between the Pakistani Army and members of the Taliban that had kidnapped the family.

Coleman confirmed her husband’s claims. “They came into the cell, and they took my husband out forcibly, dragging him out, and one of the guards threw me down on the ground, hitting me and shouting “I will kill you, I will kill you’”

The ordeal of the Coleman-Boyle family started in 2012, when the Haqqani Network, a group the US believes is being supported and protected by Pakistan, abducted them. Coleman, along with her husband, Joshua Boyle are trying to rebuild their lives in Canada now. Coleman said the guards could be very violent with them. They assaulted their four-year-old son as well as her and her husband. “I would get beaten or hit or thrown on the ground,” she told ABC News. She broke a cheekbone and three fingers while intervening to protect the children, her husband told ABC news.

Coleman said that in order to counteract the fear of beheading, the family made toys and created a game. Toys were made of bottle caps and bits of cardboard while the game was based on England’s Charles I and Oliver Cromwell.

“Obviously with people like this, the idea of a beheading is always on the table, so he [Boyle] certainly knew that this type of thing could happen to his family but then we would come up with games to make it not seem so scary,” she said while adding that “he [Boyle] had great fun pretending to be Oliver Cromwell and chasing Charles I around and trying to behead him [their son],” she said. “We made it a game so that he wasn’t afraid.”

“This was an intolerable situation for a child to be in,” Caitlan Coleman told ABC News on Monday. She expressed her regret at how her young son was beaten by their captors.

After their release last month, the family while thanking Pakistan for the rescue operation said that the militants were brutal. Boyle had said: “The stupidity and evil of the Haqqani network’s kidnapping of a pilgrim and his heavily pregnant wife engaged in helping ordinary villagers in Taliban-controlled regions of Afghanistan were eclipsed only by the stupidity and evil of authorizing the murder of my infant daughter.” He added that the guards in their cell raped his wife.

Coleman confirmed her husband’s claims. “They came into the cell, and they took my husband out forcibly, dragging him out, and one of the guards threw me down on the ground, hitting me and shouting “I will kill you, I will kill you’” she said while adding: “And that’s when the assault happened. It was with two men. And then there was a third at the door. And afterwards, the animals wouldn’t even give me back my clothes.”

Read more: Where were the US-Canadian hostages before they were freed?

The event, deemed as a positive development in the fractured Pak-US ties, made a few things clear. One was the need for Pakistan and the US to cooperate with each other to fight the menace of terrorism. Two, terrorism is an epidemic that has to be ended without discrimination as it is against human kind.

Indian among 3 foreigners killed in Afghanistan