Moeenuddin Ahmad Qureshi, passed away yesterday in Washington at the age of eighty-six. He was suffering from acute lung infection and was in hospital. Moeen Qureshi was a prominent economist and former civil servant, who served as the caretaker Prime Minister of Pakistan in 1993. Moeen Qureshi, will not be remembered in history as a senior executive in the World Bank, but as the interim prime minister of Pakistan, at a very tumultuous period in the country’s history. In a short span of 90 days, he left behind a legacy of institutional reform and ideas for change.

In 1993, the then Army Chief Gen. Waheed Kakar, forced both Prime Minister Nawaz Sharif and President Ghulam Ishaq Khan to resign. The country had been in a stalemate, with political warring between the President and Prime minister. A compromise was reached whereupon both were removed. The resolution is important in Pakistan’s political history because both the elected government and the President were pushed to voluntarily step down in order to avoid a possible military intervention.

Moeen Qureshi was in Singapore when he received a call from the President, Ghulam Ishaq Khan, who offered him the position of leading a caretaker government. Being an outsider at the time of his appointment, Moeen Qureshi was totally unknown in Pakistan. It became very quickly known that when he reached Pakistan, to take oath as caretaker PM, he did not even have a CNIC or Pakistani Passport. However, it was felt that since he was a political outsider, he would remain neutral during the elections.

Moeen Qureshi served as caretaker Prime Minister for an interim period, from July, 18 1993 to October, 19 1993. During his brief period he undertook numerous steps, which left a mark. This included exposing the mega corruption of Pakistani ruling elites by publishing a list of 5000 defaulters of bank loans and taxpayers whose total bad debt was 62 billion rupees. These lists exposed a number of affluent persons, present in Politics and bureaucracy who were involved in abusing the banking system and dodging the tax collectors.

Moeen Qureshi made the State Bank of Pakistan an autonomous body, to keep out influential people and political interference.  He took numerous other steps including the imposition of a nominal temporary tax on agriculture, making Pakistan Television and Radio Pakistan autonomous, and ensured that PTV gave equal coverage to all parties who were contesting elections. His initiatives included downsizing of the administrative machinery and abolishing the discretionary power of the Prime Minster and the Chief Ministers, of allotting residential plots to their favorites for political leverage. It goes to his credit that he undertook various endeavors in a short period of time and made a serious effort to recover Government dues with assistance from IMF and World Bank.

As ever, throughout Pakistan’s history, political and economic reforms were needed in the 1990’s, but no political party wanted to be the one to take up the mantle. Pakistani governments had never shown the necessary will to impose agricultural tax, necessary to increase tax collections. But none wanted to take on the powerful landholding classes, which sat as MNAs and MPAs in both parties. Moeen Qureshi’s government, imposed a temporary agricultural levy. Ian Talbot, British historian argues that both Nawaz Sharif and Benazir Bhutto accepted him precisely to do these ‘undesirable’ reforms that their parties would have found difficult to undertake themselves. 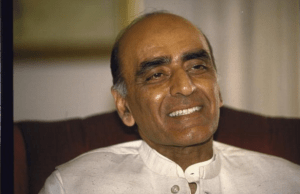 Moeen Qureshi was born in Lahore, Punjab, British India, on 26 June 1930. He hailed from an eminent family of Kasur. His father, Mohyeddin Ahmad Qureshi, was a civil servant in the British government.  Moeen Qureshi attended the Islamia College, Lahore now G.C University, where he did his B.A. (Hons.) in Economics and later went on to receive M.A. in Economics from the Punjab University. He received the Fulbright Scholarship and went to the Indiana University, United States where he earned a Ph.D. in Economics in 1955.

He began his career in the Government of Pakistan in 1955, where he stayed for a brief period, holding positions in the Planning Commission. From 1958 to 1970, he served with the International Monetary Fund. During 1974-77, he was Vice President in the International Finance Corporation (IFC). From 1977-1981, he was appointed as Executive Vice President and then Chief Operating Officer of the IFC, responsible for managing IFC’s global operations. During 1981-1987, he worked as Senior Vice President in the World Bank and from 1987 to 1991, he was in charge of all World Bank operations.

Qureshi was married to an American citizen, Lilo Elizabeth Richter, and has four children: two sons and two daughters. Mr Qureshi’s funeral will be held on Saturday at 10am at a mosque in Rockville, Mary Land , United States.

Engagement ceremony of Bakhtawar Bhutto to be an intimate affair

Bakhtawar Bhutto to be engaged with son of US-based businessman

THROWBACK: Murtaza Bhutto rails against ‘looting’ of country under PPP

US freezing aid will have little impact on Pakistan