Freed from Pakistan’s custody: Mullah Baradar to lead Taliban in talks with U.S 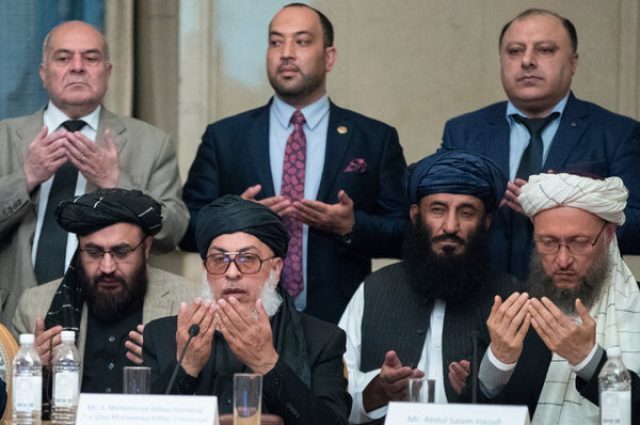 Mullah Abdul Ghani Baradar, the co-founder of Taliban movement, will be spearheading the ongoing dialogue process for his side against the United States of America. He will be leading the negotiation team of Taliban in Doha which underwent a straight fourth day of talks with U.S special envoy Zalmay Khalilzad.

The current session of talks was originally scheduled for two days but the stretch seems to point at the possibility that both sides are taking longer than anticipated time to come to mutually acceptable grounds. It is not yet sure how soon will Mullah Baradar take charge of the Taliban’s office in Qatar.

It was believed that the young cadre of Taliban movement, the real strength of the insurgent group might not give the due respect to Mullah Baradar and the strategy to use him in the negotiations might not work.

“This step [nominating Mullah Baradar for talks] has been taken to strengthen and properly handle the ongoing negotiations process with the United States,” the Taliban said in a statement. “Baradar will soon fly to Qatar. He has been given the new position be­cause the US wanted senior Tali­ban leadership to participate in peace talks,” a senior Taliban official said.

Mullah Abdul Ghani Baradar was apprehended in a joint ISI-CIA operation in 2010 from Karachi. One of the founders of the Taliban movement, Mullah Abdul Ghani Baradar served second in command to the deceased Taliban chief Mullah Umar. He was also in charge of the Taliban insurgency in Southern Afghanistan. It is not the first time that the news of his apparent release has surfaced.

He was scheduled to be released on Sept 21, 2013, as the first Taliban prisoner to go free under the arrangement made between Pakistan and Afghanistan at Chequers Summit. But due to unknown reasons, his release was postponed. His release in October 2018 was expected to result in breaking the stalemate in the ongoing process of negotiations with Zalmay Khalilzad, and apparently, it has started to take effect.

His release initially was interpreted as a move which could work both ways since he was in custody for years, increasing the chances of being perceived among the Taliban as establishment’s stooge. Since his arrest, Taliban had undergone a leadership change twice, first being Mullah Akhtar Mansoor who succeeded Mullah Omar, after the news of his death was finally revealed to the world.

Since U.S special envoy Zalmay Khalilzad has taken over the negotiations process from Alice Wells, developments have been speedy.

Later, when Mullah Akhtar Mansoor was assassinated by the direct strike of Hellfire missile from a U.S Predator drone, on his way from Iran to Pakistan, Taliban nominated Mullah Haibatullah Akhunzada to replace him. It was believed that the young cadre of Taliban movement, the real strength of the insurgent group might not give the due respect to Mullah Baradar and the strategy to use him in the negotiations might not work.

But approach seems to have worked just fine and the chances of a breakthrough have significantly improved. Though the Taliban have been gaining significant momentum in recent years and have kept taking ground from the government and foreign forces there is also a cost to it.

Continuous fighting and immense loss of civilian life in the process is counterproductive for the group’s image, even after the settlement is reached and Taliban retain the political leverage in Afghanistan as the result ongoing dialogue process. Plus, after fighting for 17 years, it is natural to get weary of fighting and it is precisely the reason why Taliban wrote an open letter to American people, urging them to force their government to end the longest military campaign in the history of United States.

Read more: Taliban leader freed after US talks with the group

Since U.S special envoy Zalmay Khalilzad has taken over the negotiations process from Alice Wells, developments have been speedy. But the key U.S concern of involving the Afghan government to settle the matter is still existent and Taliban have rigidly opposed this proposition. The key will be if both sides can get over this constant deadlock once and for all under Mullah Abdul Ghani Baradar.