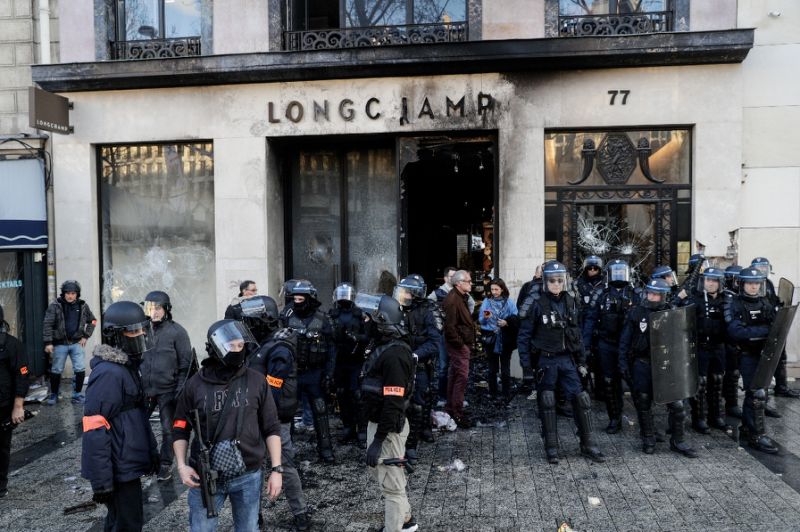 Claims for damage linked to three months of yellow vest protests in France have been estimated at 170 million euros ($190 million) even before this weekend’s riots on the Champs-Elysees, the French Insurance Federation said on Monday.

The FFA said that 10,000 claims had been filed since the outbreak of protests in November over fuel taxes, which then snowballed into a revolt against the governing style and policies of President Emmanuel Macron.

Since the end of December, the number of protesters has fallen, but each Saturday thousands still take to the streets, including far-right and far-left groups as well as anarchists who are responsible for much of the violence.

The FFA said that 10,000 claims had been filed since the outbreak of protests in November over fuel taxes.

On Saturday, 91 shops including luxury outlets such as Longchamps and Bulgari were damaged, burned or looted on the Champs-Elysees, according to the Paris Chamber of Commerce, in scenes that were broadcast worldwide.

Economy Minister Bruno Le Maire convened a meeting Monday to discuss the economic impact of the demonstrations, which have tarnished the country’s image abroad.

The government and Macron were on the defensive again Monday amid renewed questions over why security forces were again unable to prevent the violence on France’s most famous avenue.

On December 1, protesters ransacked the Arc de Triomphe and ran amok through wealthy areas of the city, torching cars and damaging businesses, in scenes that shook the country and Macron’s presidency.

“Enough is enough. What happened on the Champs-Elysees on Saturday is just the repetition of what shopkeepers have already lived through,” the Confederation of Small and Medium-Sized Companies said in a statement on Monday.

“It’s unacceptable that this was allowed to happen again,” it added, calling on the government to “take the measures which are its responsibility. Now.”

Trump says coronavirus is worse attack on the US than Pearl Harbor, 9/11