Research Fellow at the Cato Institute in Washington D.C., Dr. Khan, explores the inherent difficulties between U.S. and Pakistan relations due to the lens through which they are viewed. She asserts that the only way forward is for the two countries to shed these biases and create a relationship of mutual trust and cooperation that is based on the least common denominator of interests.

The United States and Pakistan have had a fraught relationship for decades. Both blame each other for being an unreliable ally. While Washington blames Pakistan’s constant support of militant groups like the Afghan Taliban, Haqqani Network, Lashkar-e-Taiba, amongst others, and lack of adequate security safeguards for its nuclear weapons for the unstable bilateral relationship, Islamabad accuses Washington of being dismissive of the human toll Pakistan has suffered due to the U.S.-led Global War on Terror (GWOT) and always siding with India when Indo–Pak relations heat up.

With respect of the international community, Islamabad often finds itself on the defensive with almost no or negligible support from the United States. The question that plagues analysts on both sides is: can the U.S-Pakistan relationship improve? The answer is complicated.

Over the past two decades, the United States has developed two lenses by which to analyze its relationship with Pakistan. The first is the “Indo–Pak” lens, which was shaped by the Cold War and focuses on how the United States can balance the rivalry between India and Pakistan in way that enhances U.S. interests in the region.

The Indo–Pak lens implies that within South Asia, which consists of seven countries, India and Pakistan are the most important, and hence should dictate U.S. policy in South Asia.

The second lens routinely used by U.S. officials is the “Af–Pak” lens, a term created by former U.S. Special Representative for Afghanistan and Pakistan from 2009–2011 Ambassador Richard Holbrooke, which specifically focused on the U.S. mission in Afghanistan to dismantle al Qaeda, undermine the Taliban, and support the Afghan government.

Not only have these lenses created unproductive binaries but they have also failed to recognize nuances that are crucial for the development of an effective U.S. policy.

Similar to the Indo-Pak lens, the Af-Pak lens puts Pakistan in a dyad with Afghanistan, where the latter’s stability is a priority, and any action by Pakistan that seems to undermine Afghanistan’s stability is seen a strategic liability. These U.S. lenses, however, have created a myriad of problems within U.S.–Pakistan relations.

The aim of both these lenses has been to simplify South Asia as a region to enable U.S. administrations to create smart policies. But they have done the exact opposite. Not only have these lenses created unproductive binaries but they have also failed to recognize nuances that are crucial for the development of an effective U.S. policy.

Read more: US and Pakistan strive to improve relations

Kashmir, the disputed territory between India and Pakistan, remained on Washington’s backburner even as evidence emerged that Pakistan was sponsoring anti-Indian militant groups operating in Indian-administered Kashmir. 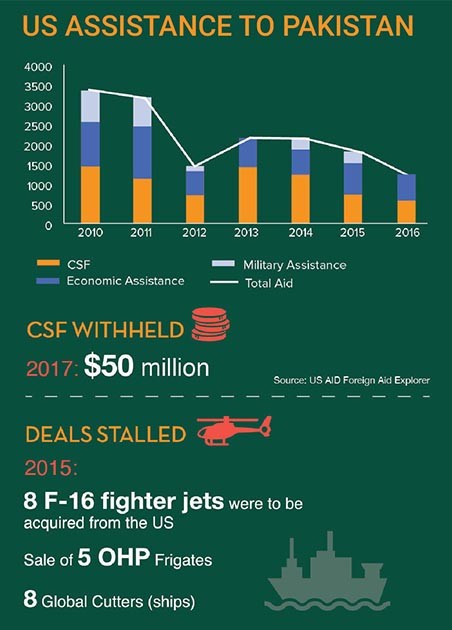 It was only after the Taliban took control of Kabul in 1996 did the Clinton administration shift its focus to Afghanistan, where Russia, Iran, and India were supplying arms to the ousted regime of Burhanuddin Rabbani, and Saudi Arabia and Pakistan were doing the same for the Taliban.

Clinton’s Indo–Pak focus, therefore, prevented the administration from analyzing regional dynamics and the Taliban’s upward trajectory within Afghanistan. Both the Bush and Obama administrations have also used the Indo-Pak and Af-Pak lenses to create their own policies toward Pakistan. The Bush administration’s foreign policy approach was shaped by the September 11, 2001 attacks and the subsequent launch of GWOT.

But the stability of the relationship largely depends on the acceptance of each other’s interests rather than persuading the other to adopt the other’s (or an alternative) point of view.

While Pakistan remained frustrated with Washington’s insistence on viewing U.S.-Pakistan relations in the context of Afghanistan, events like the uncovering of the Abdul Qadeer Khan illicit nuclear trading program and the discovery of Osama bin Laden hiding in Abbottabad further soured Washington’s relations with Islamabad, creating distrust that remains firmly in place under the Trump administration.

Read more: US & Pakistan Relations: Under the Lens of an “Eternal Optimist”

Similar to Washington, Islamabad has a tendency of looking at the U.S.–Pakistan relationship through two prisms. The first is a post–Cold War prism, which Pakistan uses to highlight how the U.S. disengaged from the region when the Soviets withdrew, eventually resulting in the rise of the Taliban.

The second is the Global War on Terror (GWOT) prism, which runs counter to Washington’s Af–Pak lens, and is centred on the U.S. led war effort to eliminate al Qaeda and dismantle the Taliban in Afghanistan and beyond. Through the GWOT prism, Islamabad highlights how Pakistan in not a sponsor of militancy, but rather a victim of militant groups. 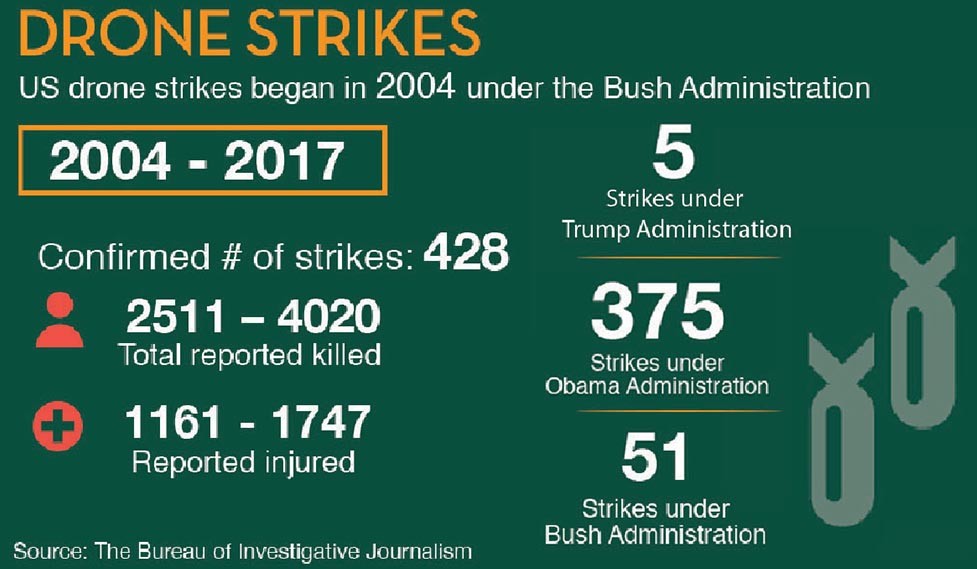 Pakistan has not only lost thousands of soldiers during GWOT but has also lost countless civilians in U.S. drone strikes in the tribal areas. Pakistan has routinely accused the U.S. withdrawal from the region after the Cold War, and subsequent negligence of Afghanistan, as one of the main reasons for the Taliban’s rise in the 1990s. But for many scholars and analysts, the key question is: what should the United States have done right after the Cold War? This is a difficult counterfactual to analyze.

From a restraint-oriented perspective, Afghanistan offers little strategic value because of its land-locked location and tendency for internal fractionalization and war. U.S. administrations, however, have found themselves overly reliant on questionable allies like Saudi Arabia and Pakistan when they have wanted to engage with Afghanistan (and other Central Asian states like Turkmenistan, Kazakhstan, and Kyrgyzstan) on economic issues.

Clinton’s Indo–Pak focus, therefore, prevented the administration from analyzing regional dynamics and the Taliban’s upward trajectory within Afghanistan. Both the Bush and Obama administrations have also used the Indo–Pak and Af–Pak lenses to create their own policies toward Pakistan.

In the absence of a coherent and consistent policy, the United States has overused its military, relying on its superior operational force to “solve” problems that should be resolved via vigorous diplomacy. Having a military-centric policy, therefore, has sidelined the use of restraint as a feasible strategy within U.S. policymaking.

For the past two decades, therefore, U.S. policy toward South Asia has been military-focused—and Pakistan has often taken advantage of this. As a partner in the GWOT and a non-North Atlantic Treaty Organization member, Pakistan’s military establishment has received millions of dollars in U.S. aid that includes grants to purchase U.S. arms and reimbursements for using Pakistani army bases.

U.S. drone strikes have killed thousands of civilians in the tribal areas, but the strikes have been carried out with Pakistan’s consent as the Pakistani military has launched its own counterinsurgency campaigns in tribal belt, namely Zarb-e-Azb (from June 2014 to April 2016) and the ongoing Radd-ul-Fasaad that began in February 2017. 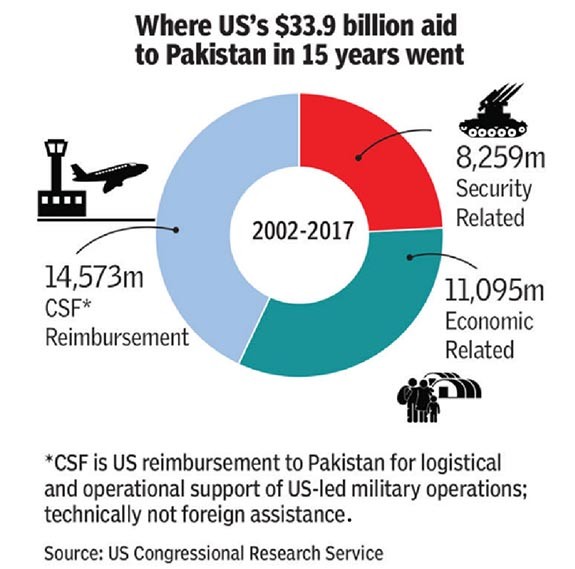 Yet, the military establishment continues to make a distinction between militant groups, targeting only those that attack the Pakistani state. For example, the military has not targeted groups like Lashkar-e-Taiba, responsible for the 2008 Mumbai attacks that killed over 150 people, and Jaish-e-Mohammad, which routinely targets Indian security forces in Indian-administered Kashmir, but it has actively pursued Tehrik-e-Taliban Pakistan (also known as the Pakistani Taliban) and Lashkar-e-Jhangvi, a militant Sunni group that targets Pakistani Shias.

This “good vs. bad” strategy has not only worsened Islamabad’s relations with Washington but have also increased political instability and violence within Pakistan, which continues to experience terrorist attacks on a monthly—and sometimes weekly—basis.

The Way Forward: Focus on Ending the U.S. War in Afghanistan

Despite their troubled past, it is imperative that both the United States and Pakistan remain engaged and committed to a bilateral relationship. Ultimately, it is in both of their interests to have a stable relationship. But the stability of the relationship largely depends on the acceptance of each other’s interests rather than persuading the other to adopt the other’s (or an alternative) point of view.

In other words, the United States and Pakistan need to stop persuading each other of the validity of their geostrategic interests. Instead, both states should focus on finding common ground on important issues that encourages cooperation and mutual benefits. For Washington, this means that it needs to stop expecting Pakistan to halt militant sponsorship.

Read more: US official visits Pakistan in quest to improve relations after FATF…

The Trump administration should use Pakistan’s relationship with the Taliban as leverage and a way to hold talks with the Taliban and Afghan government together. Similarly, Pakistan needs to stop acting like a victim, blaming U.S. negligence for the rise of the Taliban in the post-Cold War era and accusing the United States for not appreciating its sacrifices.

Pakistan’s involvement in Afghanistan may have started off with the U.S.-led Global War on Terror in 2001 but has since evolved where Pakistan has its own interest for remaining involved in Afghanistan. Pakistan’s new administration, therefore, should focus on how to reduce its reliance on militant sponsorship and increase security within its borders.

Dr. Sahar Khan is a visiting research fellow in the Cato Institute’s Defense and Foreign Policy Department. She holds a Ph.D in Political Science from the University of California. Sahar has also served as the Associate Editor of The Washington Quarterly at the Center for Strategic and International Studies.

CPEC: An opportunity or another East India Company?

While US destroys through incessant wars, China builds Economies

Suzuki to leave MotoGP at end of 2022

Aleem Khan turns down offer of ministry in Punjab

FIA steps back from cases on Hamza, Shehbaz Sharif?

Hindu Diaspora: a strategic ally of Modi & BJP but a threat to “Idea of India”

State of broadband penetration in Pakistan & the way forward

Afghanistan: The cornerstone of US-Pakistan mistrust?