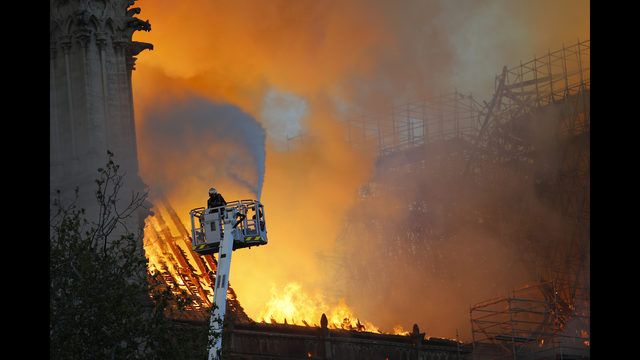 The Indian War of Independence (or the 1857 Indian Mutiny as the British call it) did not start as a “War of Independence” by the Indians against their British masters. British East India’s war machine was primarily composed of Indian native troops officered by the British, pure British-manned regiments were a handful in numbers compared to the vast Indian rank and file.

The many causes for the war i.e. political, social, economical, military and religious notwithstanding, all that was needed was a spark. This was provided when Indian Hindu sepoys refused to use rifle cartridges suspected to be greased with cow fat that had to be bitten off using their teeth, muslims similarly were led to believe that pig fat was being used. This was unacceptable to the religious feelings of both the Hindus and Muslims respectively.

Though not mentioned specifically by name Jerusalem has been referred to many times in the Quran. You can take an educated bet that religious extremists will try to exploit the situation.

Forced to use these greased cartridges, a Hindu sepoy killed two British army officers at Barrackpore on Jan 23, 1857, he was arrested and hanged in April. The news spread like wildfire, affecting all the regiments. Subsequently in May 1857 more than 80 Indian soldiers stationed at Meerut refused to bite the greased cartridges, thereafter entire regiments mutinied or were disarmed by the British.

Anyone with a grouse against the British joined the revolt, even those without a grouse but only intent on pillage and rape also did so. New leaders appeared everywhere, some with pure motives and some without. The mutiny remained limited to only a few cities such as Meerut, Delhi, Lucknow, Kanpur, Bihar, Jhansi, etc. Mughal Emperor Bahadur Shah Zafar at 82 years and in poor health, whose authority did not extend much beyond Delhi and an apology for the great Mughal dynasty he was the heir of, became a rather reluctant symbol of freedom for the mutineers. He remained a mere figurehead.

Movements starting with religious connotations tend to end up far removed from whatever aims and objectives were originally envisaged. In today’s environment of modern technological advances religious activism can be manipulated by motivated interest with considerable ease. Charlatan-ism among the leadership cadre has been endemic through the ages.

Pure unadulterated motives are easily overwhelmed by those who do not share the same altruism. When Muslim protests started in sincere interest against the publishing of the Danish outrage in late 2005, mindless motivated interests provoked it a few months later into becoming an outrage by itself that spawned violence leaving nearly 250 dead and 800 or so wounded.

Such reaction will be swift and violent. This can get out of hand very quickly as the State uses more force to quell the uprising, more people will be killed, it could well spiral into an “Arab Spring”  type civil war-like situation.

Starting on Nov 8 the ‘Dharna’ in Faizabad was called by an hitherto little-known political party Tehreek-e-Labbaik Ya Rasool Allah Pakistan (TLYRAP). Led by little known cleric Khadim Hussain Rizvi it lasted 21 days and heaped untold suffering on the people of the twin cities of Islamabad and Rawalpindi. The situation exacerbated by the incompetence of the govt and its machinery, the 2000 or so protesters demanded that Law Minister Zahid Hamid resign for allegedly amending the “Khatm-e-Nabuwwat” clause in the Election Act 2017.

Sparing only the Army, Rizvi used abusive language unbecoming of a religious leader, spewing extreme vitriol against every institution, the government, the judiciary, the civil administration and the media. The operation launched on the morning of Nov 25 was a ham-handed and amateurish attempt that was bound to fail. Interior Minister Ahsan Iqbal distanced himself saying the decision was made by the local administration in light of the Islamabad High Court (HC) orders.

Read more: nstitutional mismanagement in Pakistan: Who will expose the culprits?

With reports of casualties coming in, the operation was stopped. Six precious lives were lost and hundreds were injured. With this action protest dharnas also started in Karachi, Lahore and a number of other places. The general consensus among commentators was that the PML-N govt’s handling of the affair was not only unsatisfactory but disastrous. Untold damage was done to property all over the country and quite a quantum of livelihood was affected by a minority of extremists that no one had really heard of six months earlier.

Untold damage was done to property all over the country and quite a quantum of livelihood was affected by a minority of extremists that no one had really heard of six months earlier.

Becoming a direct threat to the writ of the state the protestors demonstrated how the government, despite all its authority and the means to impose then, remained helpless against a unified front posed by a hard-core religious group. That in the end proved to be pivotal to the resolution of the matter. The protest was called off on Nov 27 only after the resignation of the Law Minister but the perception that emerged was one that actually looked like an abject surrender.

Even if the perception was that the writ of the State was being abdicated, the govt’s first course of action should have been to try and defuse the situation. Once the situation came under control, the next step would have been to collate the intelligence to address what the protestors really wanted, who their leaders are, their background, their actual motives, who were supporting them, etc, etc.

The temptation to use force is a two-edged sword, once force is used casualties will occur and protestors will react strongly, and if the protest is spread across the country as was the case with the Faizabad protest, such reaction will be swift and violent. This can get out of hand very quickly as the State uses more force to quell the uprising, more people will be killed, it could well spiral into an “Arab Spring”  type civil war-like situation.

Pure unadulterated motives are easily overwhelmed by those who do not share the same altruism. When Muslim protests started in sincere interest against the publishing of the Danish outrage in late 2005.

Through the three weeks a constant supply of food, warm clothing, blankets, water, tea, etc, etc. kept the protestors going. The efficiency of this logistics aside, how could a few hundred protesters operating like de facto police set-up checkpoints so easily in the capital so that they could cripple the city? Management expertise notwithstanding these expenses would surely have run into tens of millions.

Surely not from the business community of the twin cities, as was suggested by a private TV channel! So what was the source of the funding and motive thereof? It is extremely curious how only during the PML-N tenure that protests completely shutting down the capital have become an almost regular feature.

Having survived one crisis because of religious connotation we are now faced with another, that of Jerusalem being recognized as Israel’s capital by the US. Though not mentioned specifically by name Jerusalem has been referred to many times in the Quran. You can take an educated bet that religious extremists will try to exploit the situation. The handling of this stoking of religious sentiment with mass appeal among the population have both domestic and international ramifications. This particular crisis must not be allowed to be blown out proportion