Gautam Gambhir jumps in on the national anthem debate! 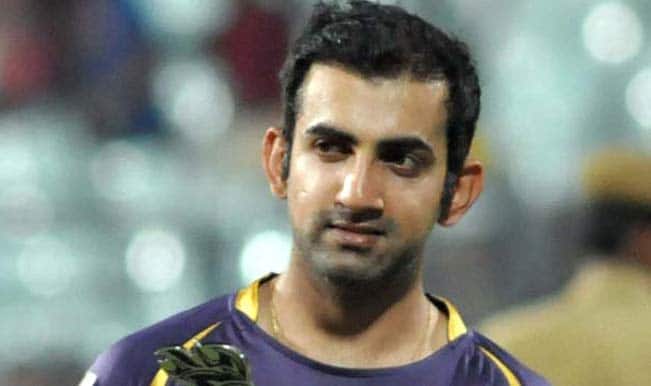 Fiery Indian opening batsman, Gautam Gambhir has given his two cents on the ongoing national anthem debate which has drawn comments from stars in the entertainment industry. The left-handed opening batsman, who is part of the Indian setup took to Twitter to express displeasure over people who are raising eyebrows on the mandatory anthem before movies in the cinema halls. He said: “Standing and waiting outside a club: 20 mins. Standing and waiting outside favorite restaurant 30 mins. Standing for national anthem: 52 secs. Tough?”

Gambhir is known for his hot-headedness and jingoistic comments on national issues. A day after Kashmiris expressed their ecstasy on Pakistan’s victory over India to clinch the Champions Trophy in June this year, Gautam took a jibe at Mirwais Umer Farooq and tweeted: “A suggestion @MirwaizKashmir why don’t u cross the border? U will get better fireworks (Chinese?), Eid celebs there. I can help u wid packing.”

Celebrities like Kamaal Hasan and Arvind Swami took exceptions to the need to test patriotism. While they said that they respect the anthem-like anyone else.

The left-handed batsman who last donned the Indian kit in 2016 is often invited to talk shows by the firebrand Arnab Goswami.

Earlier this week, giants of the Indian entertainment industry have said that no one has a right to judge patriotism by making it mandatory for cinema halls to play national anthems before the start of their shows. They contended that the respect for “Jana Gana Mana” should not be artificial but natural.

Read more: Are Hindu women being radicalized by RSS?

The Supreme Court mandated on Monday to play national anthems in public places including cinema halls. The wording of a November 2016 order on the very matter might be changed so that cinema halls “may” – instead of “shall” – play the national anthem before the start of movies.

The wording of a November 2016 order on the very matter might be changed so that cinema halls “may” – instead of “shall” – play the national anthem before the start of movies.

However, stars have lashed out at this compulsion. Music wizard Javed Akhtar said: Something is seriously wrong with those Indians who don’t get touched and don’t feel any reverence when they hear the national anthem. It really pains me that some people are trying to undermine the dignity of our national anthem.

Celebrities like Kamaal Hasan and Arvind Swami took exceptions to the need to test patriotism. While they said that they respect the anthem-like anyone else, making it a mandatory part of cinema proceedings does not stand to logic.

The famous Pakistani-turned-Indian star Adnan Sami said: Hey, it’s the national anthem; GET UP… PERIOD! Go argue about something else! ‘Where’ the national anthem should play is another matter; but whenever or wherever it is played, get up and respect it. From the heart — Not sleeve!

This radical mindset is prevalent in South Asia especially in India under the BJP-led Modi government.