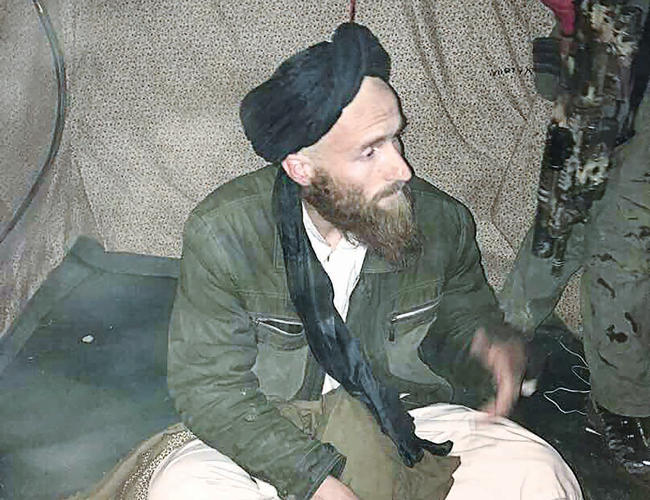 A German national believed to be a military advisor to the Taliban in Afghanistan has been arrested in the insurgency-racked province of Helmand, officials told AFP late Wednesday.

“A man with a long beard, wearing a black turban who identified himself as a German citizen and speaks Dutch, was taken along with three other suspected Taliban on Monday night in Gereshk district of Helmand province,” said Omar Zwak, the provincial governor’s spokesman.

Gereshk police chief Ismail Khplwak said the man — who was detained by Afghan Special Forces during a night raid — was the “military adviser of Mullah Nasir”, commander of the Taliban’s elite “Red Unit” in Helmand.

Photographs taken by the Afghan military show a man who looks to be in his 40s with a long reddish-brown beard speckled with grey, and wearing a black turban.

He is flanked by two members of the Afghan Special Forces dressed in combat gear and with night vision goggles pulled up onto their helmets.

The man is dressed in traditional Afghan dress, a long shirt and wide trousers, worn under a khaki military jacket.

Much of opium-rich Helmand in Afghanistan’s south remains controlled or contested by the Taliban who are heavily reliant on the proceeds of drug trafficking to fuel their insurgency.

The Taliban’s Red Units serve as the insurgents’ special forces and have carried out many fatal attacks on the Afghan army and police.

Previous articleI am the King – I don’t need courts to verify that!
Next articleWhat is actually happening in Eastern Ghouta?

18 September 2021
Previous articleI am the King – I don’t need courts to verify that!
Next articleWhat is actually happening in Eastern Ghouta?

20 years ago, US embassies in East Africa attacked

No democracy in Afghanistan: Taliban