Dissing the extremist propaganda, the sober social media stands in unity with the Hindu community, calling for a discourse on blasphemy laws. Muslims in Ghotki gathered to protect a Hindu temple from mob 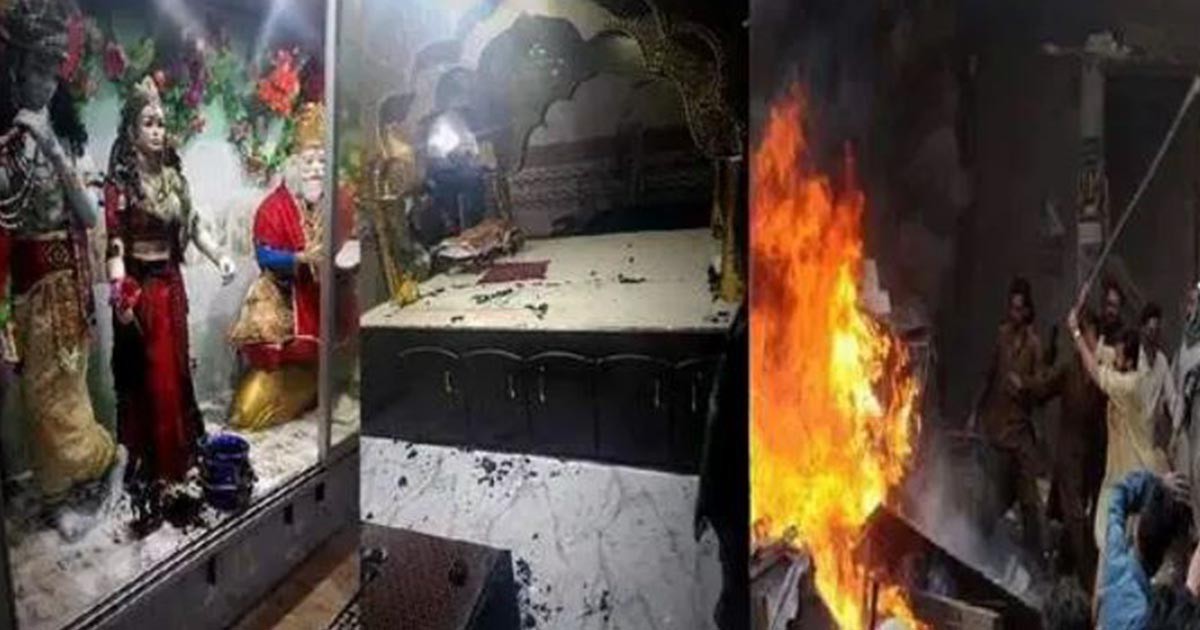 Social media has expressed furor following the vandalizing of a Hindu temple in Ghotki, a small city in interior Sindh, after blasphemy accusations against a Hindu principal. Aghast on the appalling Ghotki incident alarmed social media made calls for the authorities to take immediate action against transgressors to protect the Hindu community.

Netizens stress the government to arrest Mian Mathu, a prime accused in the Ghotki incident. Mian Mahtu is a local cleric notorious for his extremist outlook against religious minorities, especially the Hindu community. He is been charged in several cases for abducting Hindu girls and marrying them off to Muslim boys after conversion to Islam.

#Pakistan state must guarantee and protect places of worship, lives and properties of minorities (Hindus)as stated in Islam and also in constitution of Pakistan. I condemn #Ghotki incident in strongest terms. pic.twitter.com/vaQRxhreMu— WARSI (@WarsiBlunt) September 16, 2019

#Ghotki incident has laid the foundation of migration of Hindus from northern Sindh to Karachi. Mian Mithoo has become a state within state in Ghotki. Despite all proofs, no action is being taken against him. #ArrestMianMithoo #PakistanForAll— ~ (@shyfawkess) September 16, 2019

#blasphemylaws #Ghotki #Ghotki_Burning #MianMithoo About time we do that? How on earth a 14 year old can allege someone of #blasphemy and we blindly follow? He is not even an adult as per the law. #Think pic.twitter.com/w2NOc2mQe8

Let's start a chanda campaign to rebuild the vandalized Hindu temple. Let us show the world other side of progressive Pakistan#Ghotki #Ghotki_Burning— Zohaib Hassan (@zabi7474) September 16, 2019

The Ghotki incident ensued a discourse on the blasphemy laws on social media and how to protect the minorities from being unduly persecuted under blasphemy laws.

Few of the social media users pointed to the failure of the authorities in maintaining peace in the society, asserted that violent mob burning the school and a Hindu temple tantamount to undermining the writ of the law enforcement agencies.

Centuries old inter-faith harmony is at wane in beloved Sindh. Islam disallows to attack any religious places. Strongly condemn #Ghotki incident. Culprits must be brought to behind the bars. These types of transgressors have tarnished real image of the religion. pic.twitter.com/W7kA1XDZUy— Asif shar (@asifsharwrites) September 15, 2019

Ghotki incident is a stigma on Pakistan. Only harsh action against extremist elements can erase it. Inaction would be tantamount to a tacit support to extremist gangs

Social media expressed immense solidarity with the Hindu community and stated that Pakistan was created on the principles of protection and safety of minorities.

Are we literally following the sayings of Quaid-e-Azam or respect for him is just limited to our currency notes? Ghotki incident tells a different story about how “tolerant” Pakistanis have become. Time for some self-evaluation. #ArrestMianMithoo#Ghotki #Sindh— Khalid Raza (@iamkhalidraza) September 16, 2019

Govt must ensure immediate protection of life, property and all religious places of Hindu Community in Ghotki. A improved blasphemy charge resulting into mob violence isn't a coincidence and is never a coincidence. The incident reeks of malice on the accuser's part. https://t.co/vaX3ZeWmN7— M. Jibran Nasir (@MJibranNasir) September 15, 2019

PTI or PPP: Who is responsible?

Ghotki incident of A mob attacking the SSD dham temple is shocking but pls note the mob was controlled by Other Muslims Only. We have a few bigoted Muslims who spoil the good name of all Muslims Same like RSS is spoiling name of all Hindus . #InterFaithHarmony

Just one correction mian Mithu wanted to join PTI after meeting when @ImranKhanPTI was briefed about his extremist ideology he straight away refused to take him in PTI so he was never allowed to be part of PTI https://t.co/NHgFBQNBDS— Ch Fawad Hussain (@fawadchaudhry) September 16, 2019

Sir jee he NEVER joined #PTI. He tried to join once in 2015 and once in 2017. Both times he was NOT accepted. He even contested as an Independent . @PTIofficial https://t.co/HNRGRHjzpW— Dewan Sachal (@essel1) September 16, 2019

Several PTI legislatures including Minister for Science and Technology Fawad Chaudhry and Dewan Sachal dismissed the speculations and distanced themselves from Mian Mathu. Sachal maintained that Mian Mathu attempted to join PTI but was refused party ticket. Fawad Chaudhry also made similar assertions added that PM Khan denied him party membership for his extremist ideology.

Pictures were afloat on social media, which showed a large number of Muslim men in Ghotki turned up to protect the Hindu community.

Pictures shared by a few journalists on social media showed a group of Muslim men gathered in a Hindu temple to protect it from a violent mob.

The #Ghotki incident is not only against Hindus. It's against Pakistan. Silly ppl don't realise it will weaken our position on IOK issue and defame us in the world of being an intolerant and ignorant society. https://t.co/JJADAIuApj— Asma (@AsmaZhk) September 15, 2019

After unfortunate incident of religious frenzy in Ghotki a day ago, the Muslims of the area stood guard last night to protect Hindu temples and homes in Ghotki.

While Police has lodged FIRs against dozens of miscreants who attacked Temples. Pakistan stands with its Hindu minority. pic.twitter.com/aQxHenRKnn— Asfandyar Bhittani (@BhittaniKhannnn) September 16, 2019

US senator tweets against Floyd protests; suggests bringing in military