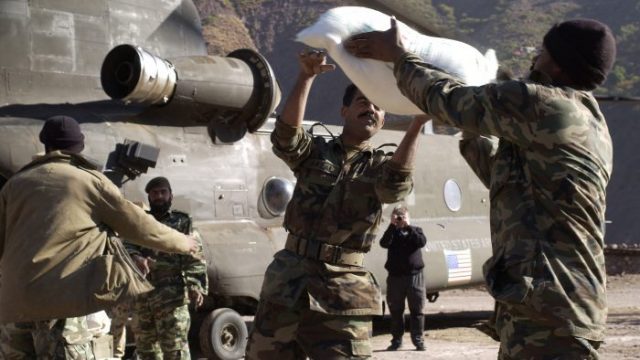 In the world of international relations where alliances are fickle and interests, constant, Pakistan stands at a very significant juncture in time. The changing world atmosphere is slowly giving rise to a wave of multilateralism which, has translated into a need for forging new alliances. Although the world is entering the era of economic interdependence, security cooperation of the conventional kind is still as important as it used to be a few decades ago.

Such security exchanges are a crucial form of cooperation between countries in this day and age, when the world powers, alongside other smaller states, are entering a new era of a global arms race. The nature of threat perception in the world today has modified due to the rise in the influence of non-state actors and the non-conventional nature of security hazards that exist in the world today. Having the 6th largest army in the world, Pakistan in this current era has a lot to offer to the world.

Pakistan should, as a future policy, increase security cooperation and military-to-military exchanges with other countries, especially the Muslim countries so that its true potential can be seen by the world and those who strive to malign its image.

In this regard, the Pakistan army has always maintained an extensive level of bi/multilateral military cooperation with countries around the globe, and particularly in the Muslim World. Currently, the State of Qatar is hosting 600 Pakistani Army personnel while Bahrain was hosting the same number between the years 2008 to 2013. According to the 1982 bilateral protocol on defense cooperation between Pakistan and Saudi Arabia, there are about 1400 Pakistani troops in Saudi Arabia and a little over 1,000 are to be sent soon.

Under this defense cooperation pact, Pakistan and Saudi Arabia have an agreement overtraining and advising of the Saudi soldiers by the Pakistan army. After this decision was announced, through a press release by the military spokesperson from ISPR (Inter Services Public Relations), a storm of controversial remarks ensued. With the Senate and the National Assembly members opposing this move, objections have also been raised in the media about the sagacity of this move.

It is also being grouped together with the parliamentary resolution previously undertaken against sending Pakistani troops to Yemen but this, however, is a totally separate matter. This contingent being sent is under the auspice of a defense pact that has been in place since decades, with a brotherly Muslim country with which, Pakistan’s ties are both religious and historic. The parallels being drawn, between sending troops to Yemen and sending this contingent to Saudi Arabia for internal security training purposes, are utterly ridiculous.

This move has been cast under a negative shadow due to a narrow-minded approach towards Pakistan’s foreign policy, by the disintegrative elements in the society. The failure to comprehend how this move is quite pertinent in this point in time, when Pakistan is experiencing a trough in its ties with an old and a powerful ally like the United States, proves that those criticizing this move are clearly delusional. They fail to see how our eastern neighbor is expertly lacing regional and extra-regional countries with tactful diplomacy and economic incentives.

Although the world is entering the era of economic interdependence, security cooperation of the conventional kind is still as important as it used to be a few decades ago.

The coy diplomacy of the Indian government is at its peak with the Indian Prime Minister, Narendra Modi’s, visit to Palestine and the Israeli Prime Minister, Netanyahu’s, visit to India which, depict how it has mastered the act of external balancing. Alongside its masterful approach towards international relation,s in luring goodwill and investment towards India, it is also propagating a maligning campaign against Pakistan. The new Chabahar Port deal with Iran is another indication of the Indian policy of encircling Pakistan slyly.

At this point in time, instead of criticizing Iran or India for their collaboration which, has been in the offing for many years now, Pakistan needs to diversify its own relations. This will include introducing an edge of diplomatic maturity in Pakistan’s foreign policy. This means, if Indian policymakers can use their enormous market size and cultural soft power campaigns in furthering their actual agenda of compounding their military might, then why can’t Pakistan use its strengths to intensify relations with other countries?

Read more: Will India calm down after China’s clarification over military designs in…

Carefully planning Pakistan’s outreach in terms of its military cooperation with other countries, expansion of campaigns, like sending contingents for training and advisory purposes, is a brilliant move. Over time, Pakistan has faced conventional as well as non-conventional challenges from external and internal threats, the most menacing of which has been the scourge of terrorism. Fighting these elements, infiltrated within the Pakistani society, has led to an expert training of our soldiers, who now possess skills of surgical operations, combat on ground and stealth level expertise to neutralize such sneaky opponents.

This expertise is needed around the world as now, the types of conflict on-going in different parts of the globe are being fought between non-state actors and perpetrators of terrorism. Such expertise is quite scarce around the world in armies of most countries. This mode of expertise, when shared with other states, can help Pakistan build a wall of states combined together against the plague of terrorism. Leading such a charge is in no way detrimental to Pakistan’s image as it conveys to the international community that Pakistan stands tall against the menace of terrorism.

The parallels being drawn, between sending troops to Yemen and sending this contingent to Saudi Arabia for internal security training purposes, are utterly ridiculous. This move has been cast under a negative shadow due to a narrow-minded approach towards Pakistan’s foreign policy, by the disintegrative elements in the society.

For the purpose of silencing all opposition, it has been, time and again, conveyed that the troops being sent to KSA will remain within the geographical confines of the Kingdom and will be only limited to advisory and training role. With the internal security situation becoming a little uncertain in the Kingdom due to the anti-corruption campaign within the Al-Saud itself, the Kingdom has requested Pakistan’s help.

Some fear this move will irk Iran but the premise is entirely ludicrous as the Islamic Republic has also been sending its pilots to Pakistan Air Force for training in aerial combat. Also, the decision of one state to increase cooperation with another state is not an irritant in that state’s relations with a third state. Indo-Iranian cooperation on Chabahar can also spell out military cooperation in the future, between both countries, and could threaten Pakistan’s national security interests in Afghanistan but upon Iran’s reassurances, Pakistan has not objected to its move to lease Chabahar out to India.

In the same vein, our Muslim friends in both Iran and Saudi Arabia understand that Pakistan will never side with one or the other in their perpetual rivalry within the Islamic world. Pakistan enjoys warm relations with both countries regardless of their respective alliances but if the question of our own internal security is put to the threat, then there will be no qualms about defending ourselves. Pakistan should, as a future policy, increase security cooperation and military-to-military exchanges with other countries, especially the Muslim countries so that its true potential can be seen by the world and those who strive to malign its image.

Mr. Muhammad Taimur Khan is a freelance journalist. He holds an M. Phil Degree in International Relations from  National Defence University, Islamabad. He wrote many research articles, Policy Briefs, Issue Briefs, Book Reviews and Monographs on topics related to International Relations. The views expressed in this article are authors own and do not necessarily reflect the editorial policy of Global Village Space.