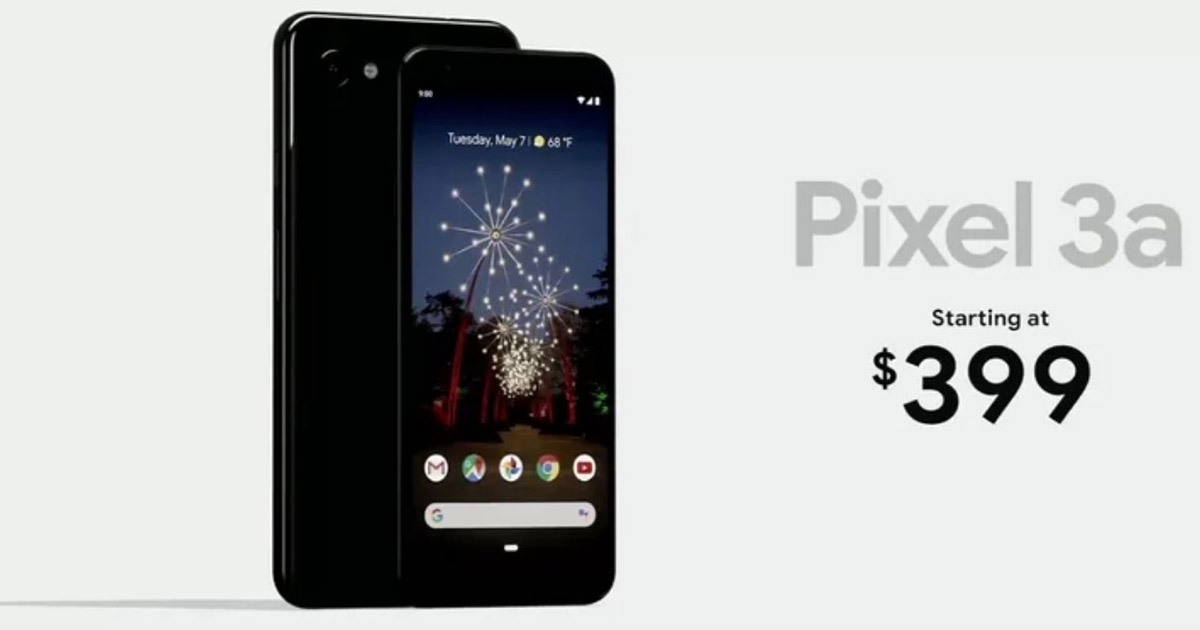 Google bucked the soaring smartphone price trend Tuesday, unveiling a high-performance Pixel handset aimed at the middle of the market as part of a wide-ranging pitch to developers of its new hardware, software, and privacy efforts. The Pixel 3a phone, which includes many of the artificial intelligence features of its flagship devices, is priced from $399, executives said as Google opened its annual I/O developers conference near its headquarters in the Silicon Valley city of Mountain View.

“There has been a troubling trend of high-end phones getting more expensive,” Google head of hardware Rick Osterloh said. “So, we challenged ourselves to deliver a high-end experience in a new Pixel 3a starting at $399.” The new Pixel was available at Google’s online shop. Osterloh contended that the price is about half that of latest generation premium smartphones but is built with camera, digital assistant and other features found in top-end handsets.

“They just redefined what a mid-priced phone can do,” Forrester Research principal analyst Frank Gillett said at the event. “But they didn’t tell us what compromises they made on the hardware.” Google’s expertise is software, so getting features like artificial intelligence to work on less costly smartphones plays to the internet giant’s strength, according to Gillett.

Enabling artificial intelligence to handle sophisticated features on smartphone means less user data needs to be shared with online data centers to handle tasks, Google chief executive Sundar Pichai said while discussing steps being taken to strengthen privacy and security of users. “We always want to do more for users, but do it with less data over time,” Pichai said. “We strongly believe that privacy and security are for everyone.”

The Pixel 3a makes its debut in a tightening smartphone market, particularly when it comes to premium models, with Google having failed to garner significant market share. Over the past quarter, South Korea’s Samsung led all manufacturers with a 23 percent share in a global market that fell 6.6 percent, according to research firm IDC.

China’s Huawei, US-based Apple, and three other Chinese firms rounded out the top five, according to IDC. Google stepped up its hardware ambitions last year with the acquisition of the smartphone division of Taiwan-based HTC. The new Pixel 3a device is being introduced as Apple and Samsung have boosted prices of their newest handsets to over $1,000 and with Google’s flagship Pixel 3 selling from around $800.

Pixel 3a has features “extremely attractive to users on a budget,” and comes as a threat to the leading Android-powered smartphone maker Samsung, according to Creative Strategies analyst Carolina Milanesi. Google also introduced a Nest Hub Max device that combines a 10-inch (25-centimeter) display with a camera, microphone, sound system, and a digital assistant.

Smarts built into Max include facial recognition that allows the device to personalize experiences and even alert owners when someone it doesn’t recognize is in a home, according to executives. Max will be priced at $229 when it launches later this year in Australia, Britain and the US. Analyst Gillett saw the Max price as “jaw-dropping” given it combines a smart camera, video screen, and high-quality stereo.

Google executives dived deep into ways it is improving its software, particularly with privacy and machine learning in mind. Along with weaving podcasts and 3-D augmented reality images into search results, Google is enabling more of the computing to be done on handsets where users have control.

“Instead of sending data to the cloud, we shipped machine learning models directly to your device,” Pichai said. “We always want to do more for users, but do it with less data over time.”

While the “devil is in the details” regarding how much of what Google mobile software learns about users will be “grist” for its money-making online ads, weaving improved privacy into its offerings could improve the company’s position with regulators, according to Gillett.

News Desk - 25 June 2021
Telenor's project called, "Naming the Invisible by Digital Birth Registration" with UNICEF was to create a social impact in Pakistan in a way that millions of children who were previously without basic necessities of life would now be getting it.