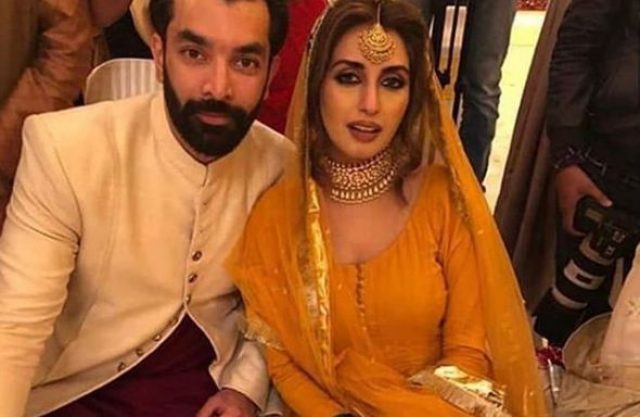 The video of her Nikah ceremony was released on social media. The beautiful bride was seen signing off her Nikah papers with a vibrant smile. Her Haq Mehr is reportedly set Rs, 2.5 million.

The event was magnificently decorated by none other than QYT, the event planner maestro, while prominent photographer Irfan Ehson did the photography.

Shahzad Raza danced off to the beat following Iman Ali who was seen joining her friends on the dance floor later on.

The model had announced her engagement on January 18th with fiancé Bhatti, the grandson of Major Aziz Bhatti Shaheed and is the director of Green Earth, Canada.

Iman Ali is the daughter of veteran actor Abid Ali. Iman Ali made her debut with PTV. She rose to further prominence with Shoaib Mansoor’s ‘Khuda Kay Liye’. She also featured in movie Mah-e-Mir alongside Fahd Mustafa. Iman Ali has established herself as Pakistan’s magnificent top model.

She is set to return to the screen with the movie Tich Button, the directorial debut of Mawra Hocane. The movie includes Sonya Husyn, Farhan, and Feroze Khan in lead roles.

Vinay Pathak is open to work with Pakistani filmmakers

Mawra, Uzair are the official graduates of University of London